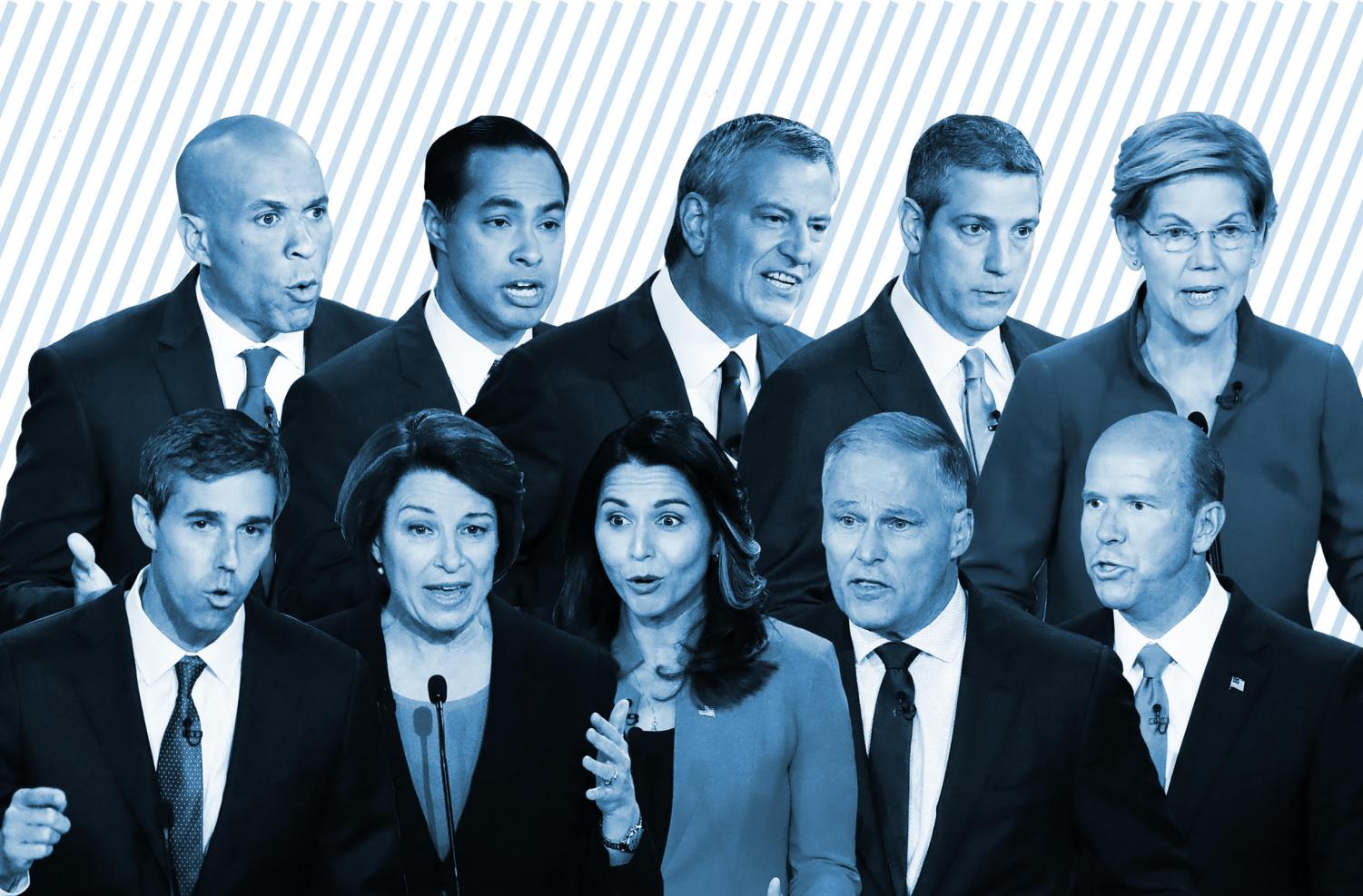 Ten Democratic presidential candidates went head-to-head onstage to debate their stances on issues ranging from immigration to impeachment in the first round of the Democratic primary debates Wednesday evening. Photos by Wilfredo Lee / AP (Shane Tolentino)

Ten Democratic presidential candidates went head-to-head onstage to debate their stances on issues ranging from immigration to impeachment in the first round of the Democratic primary debates Wednesday evening. Photos by Wilfredo Lee / AP

Five key moments from night one of the Democratic primary debates

From awkward Spanish to shouting matches over an obscure section of the U.S. Code many viewers probably hadn’t heard of, night one of the Democratic presidential primary debates was a mixed bag of ups and downs that left viewers thinking: “Wait, there’s another one tomorrow?”

The debate Wednesday night included 10 Democratic candidates for president, one of whom was Massachusetts Sen. Elizabeth Warren, who not only sat centerstage, but who was also the only candidate on the stage who came into the debate polling above 5%.

That moment Elizabeth Warren came out on top

Warren came out on the other side of the debate with her status as a top contender still intact, despite only having the third most air time with 9.3 minutes, just below New Jersey Sen. Cory Booker and former Texas Rep. Beto O’Rourke.

Unlike on the campaign trail, Warren came out in unequivocal support of Vermont Sen. Bernie Sanders’ Medicare for All and getting rid of private insurance.

With the debate stage a mere 50 miles from Parkland, Florida—where a shooter killed 17 students at Marjory Stoneman Douglas High School Feb. 14, 2018—Warren said the toughest questions she is asked during town halls on the campaign trail come from young students asking how she will keep them safe in schools.

In response, Warren said she will treat gun violence as a national health emergency by implementing an assault weapons ban and putting more emphasis on research to find lasting solutions to school shootings.

That moment we all looked up Section 1325

When Texas-native and former Secretary of Housing and Urban Development Julián Castro fielded the first question on immigration, he took the opportunity to call for all the contenders to commit themselves to repealing Section 1325 of the U.S. Code—even getting into a shouting match with O’Rourke over him not doing his “homework on this issue”—which no doubt led many viewers to type into their search engines: “What is Section 1325?”

Section 1325 in Title 8 of the U.S. Code makes illegal immigration a federal crime and is essentially what gave the Trump Administration the power to separate migrant children from their families at the border. Castro and many of the other candidates, excluding O’Rourke, instead have called for making illegal immigration only a civil offense.

Booker quickly chimed in and said he would change U.S. Immigration and Customs Enforcement policies, reinstate Deferred Action for Childhood Arrivals, or DACA, and address the root causes through international investment.

“When people come to this country, they do not leave their human rights at the border,” Booker said.

Booker not only got the most air time—a whopping 10.9 minutes during the two-hour event—but his impassioned remarks on gun violence caused a surge in online searches of him according to Google Trends data.

“For millions of Americans, this is not a policy issue, this is an urgency,” Booker said. “For those that have not been affected, they will learn about reading, writing and arithmetic and how to deal with an active shooter in school, and all [government has] to offer is thoughts and prayers. Faith without works is dead. We will find a way. The reason we have a problem is we let the corporate gun lobby frame this debate. It is time we have bold actions and a bold agenda. I will get that done as president of the United States because this is not about policy. This is personal.”

Washington Gov. Jay Inslee took his 30 second answer time on the topic of healthcare to tout the fact that he was the only candidate onstage to pass legislation that protects the right to an abortion. In response, Minnesota Sen. Amy Klobuchar pointed out there were three women beside him who have fought pretty hard for that right, too.

While Warren said her healthcare policy plan would include coverage for abortions and birth control, Castro added that when it comes to abortion he’ll fight for reproductive justice in transgender and low-income communities, as well.

Castro added that he would appoint federal judges who respect Roe v. Wade and include the right to an abortion under healthcare coverage.

That moment they blasted Trump

The debate had more than its fair share of candidates bashing President Donald Trump, who tweeted his thoughts on the debate in one word: “BORING!”

When asked about foreign relations, Klobuchar said: “This president is one tweet away from going to war. And I don’t think we should conduct foreign policy in a bathrobe, which is what he does.”

Perhaps the most memorable spoken response was Castro, who in his closing statement, invited the audience to say “Adios” to Trump in 2020.