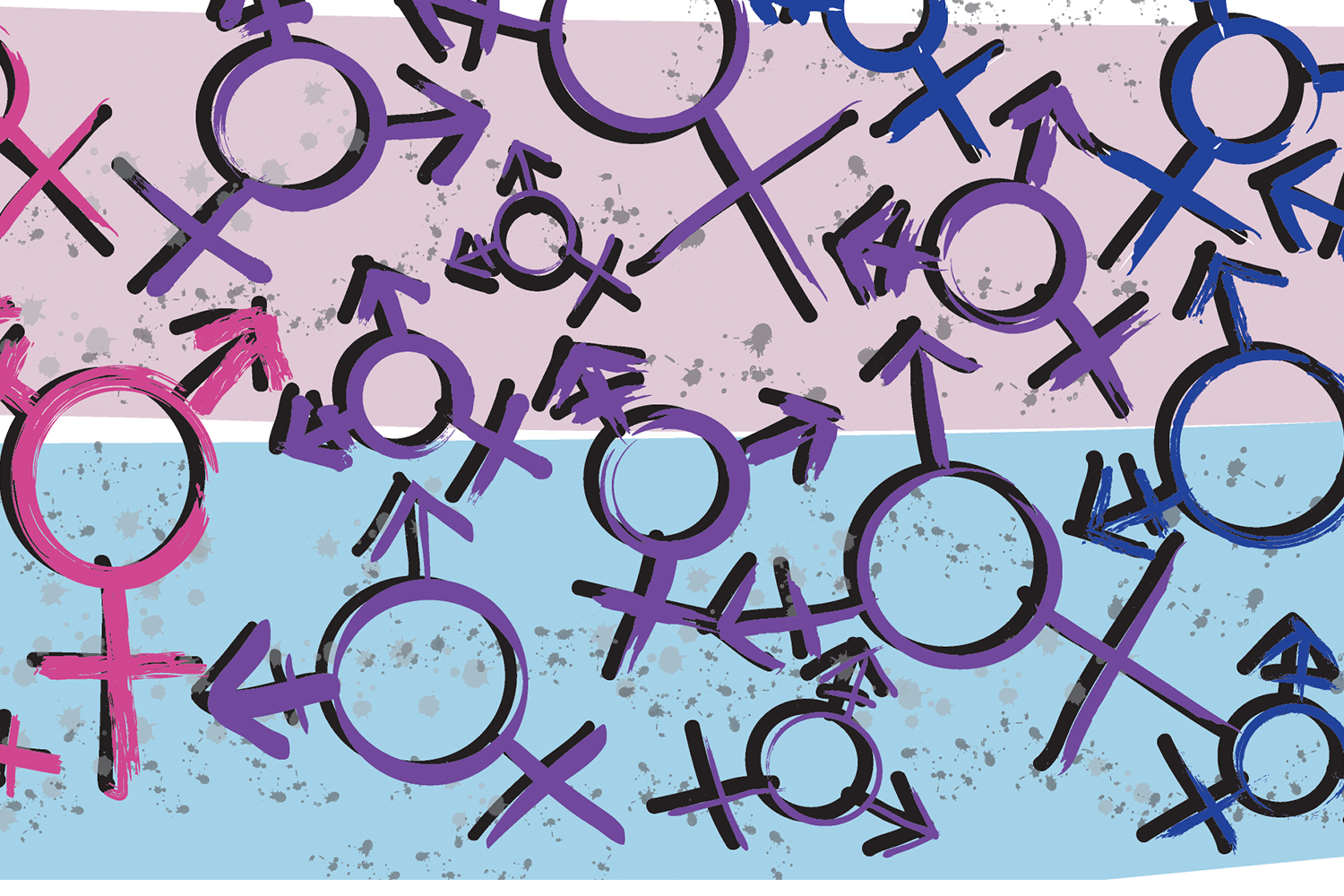 Former theatre design major Niko Gotowko dropped out of Columbia last semester due in part to the alleged transphobia he experienced. Gotowko said teachers within the Theatre Department were misgendering him and, in some cases, would make him feel uncomfortable when discussing his pronouns.

One teacher used incorrect pronouns so often other students began misgendering him.

It is uncertain how many students have similar complaints. Their complaints represent a new and growing dilemma for Columbia and other schools seeking to include transgender students in their diversity initiatives.

Misgendering is when someone misidentifies another person by using the wrong pronouns, such as using he/him pronouns when they/them are preferred.

Director of the Student Diversity and Inclusion Office Charee Mosby-Holloway called misgendering “an act of violence.”

Junior radio major Hayden Hoerner also said his time at Columbia has been filled
with problems.

Hoerner said the first time being misgendered by a professor is like being snapped with a rubber band. Each additional time he is misgendered, the feeling gets worse, until it makes him want to vomit, he said. That feeling can worsen depending on the level of severity or who is doing the misgendering.

To address the needs of LGBTQ students on campus, the college created the Gender
Inclusive Initiative.

“Columbia is one of few colleges in the country to have launched a five-year initiative dedicated solely to gender inclusivity,” said Senior Director of the college’s News Office Lambrini Lukidis in a March 19 email to The Chronicle.

After initially interviewing Mosby-Holloway, The Chronicle requested a follow-up interview that was denied by the News Office. All questions were forwarded to Lukidis, who said, “Columbia is in many ways ahead of other institutions on this matter in terms of breadth, scope
and approach.”

As part of the initiative, the college created a name change form on the website and created a pronoun usage guide.

But even with those measures in place, some staff and faculty members still
misgender students.

“I asked a teacher to use my preferred pronouns, and she keeps misgendering me like I never said anything,” said freshman creative writing major Eliza, who preferred to have  their last name withheld. “That hurts, because trans people have been erased and killed in history, so how much has really changed?”

But neither Gotowko nor Hoerner reported their complaints. Gotowko said he was not aware of how to report an issue; Hoerner was afraid of being labeled as a problem student if he reported any complaints.

“It got to the point where I felt like if I made a big stink about it, I would be labeled as a problem student or [be] ignored outright,” Gotowko said. “I’d be making a fuss over something that wasn’t ever going to change.”

Beyond the Title IX process, students can complain to multiple places at the college, including: the SDI office; Student Relations in the Dean of Students Office; the Academic Diversity, Equity and Inclusion Office; or the Equity Issues Office.

The college has tried to address some reporting issues by adjusting SDI’s office hours from 9 a.m. – 5 p.m. to 10 a.m. – 6 p.m. to be more accessible to students. Mosby-Holloway said she expects to stay until 7 p.m. most days.

For after-hours reporting, students can email complaints to SDI at inclusion@colum.edu or use the anonymous complaint form on the college’s website.

“We try as best we can to be as accessible as possible,” Mosby-Holloway said.

Repeated misgendering after a student’s gender expression has been clarified appears to violate Columbia’s Anti-Discrimination and Harassment Policy.

The policy states, “Columbia will not tolerate harassment or discrimination based on religion, race, sex, sexual orientation, gender identity or expression, national origin, age, disability or ethnicity by or of its students, faculty or staff.”

The policy also states the college is “committed to maintaining an environment that respects the dignity of all individuals.”

Janely Rivera, director of Equity Issues and Title IX Coordinator,  said in an April 19 email to The Chronicle the Sexual Misconduct Policy protects students who are repeatedly misgendered in class and on campus.

Hoerner also said he did not receive gender-inclusive housing despite applying for it his freshman year in 2016. He was also not notified when he was denied the housing and was roomed with women.

“While we do not guarantee any housing format or assignment when the request is made, we work very hard to accommodate every request and the needs of each student,” Lukidis said in a March 21 email to The Chronicle. “A student is always informed about their housing assignment well in advance of moving in through the housing portal.”

Hoerner alleges he has also been misgendered outside the classroom, by a janitor.

Hoerner said he does not feel comfortable or safe using gender-specific restrooms because of the 2017 incident. He estimated he has used the restrooms on campus three to five times total since his sophomore year.

Misgendering has become so prevalent Hoerner began to avoid sharing his preferred pronouns with teachers, especially if he rarely communicates with them.

“Intentional or unintentional, it doesn’t matter to me,” Hoerner said. “I was told I would be supported and accepted 100% here.”

Columbia does not mandate staff training on pronoun awareness, but the Academic Diversity, Equity and Inclusion Office can conduct training for faculty if requested. Mosby-Holloway said her office offers training for students and staff.

The Office of Academic Diversity, Equity and Inclusion was not available for comment.

Dear Aunaetitrakul, assistant director for gender and sexuality at the Angelina Pedroso Center at Northeastern Illinois University, said NEIU also does not have mandatory training on pronoun usage for its faculty. She said the university does have an optional four and a half hour training session on the topic, as well as other similar topics for faculty and staff.

Aunaetitrakul noted it can be difficult to get teachers to attend training, and some faculty members may not be open to change because they are set in their ways. She added misgendering is hard to investigate in order to prevent it in the future.

Mosby-Holloway noted the importance of training faculty because they have the most face time with students. She added it is important students see themselves represented in programming.

Both Gotowko and Hoerner cited a lack of gender-inclusive restrooms which has prevented them from using the restroom even when they really needed to.

Gender-inclusive restrooms were a major part of the Gender Inclusive Initiative, which the college is currently revisiting. The college had planned to assess the program two years ago but has yet to complete the assessment. Because multiple offices are involved, it is difficult to gather all the information, but Mosby-Holloway said she hopes to have it by Fall 2019.

The Gender Inclusive Initiative also examined pronoun awareness, gender-inclusive housing, counseling services, Title IX and educational resources, according to the college’s website. It was first implemented seven years ago, according to Mosby-Holloway.

The college will continue to collect feedback from focus groups with students, which will be held toward the end of the spring semester, according to Mosby-Holloway.

The focus groups will gather feedback on the initiative’s success thus far, as well as other ideas to further build a more inclusive college, she said.

She said it is important to report complaints so the college has knowledge of issues and can act on them.

Mosby-Holloway has only been able to keep track of general complaints during the year she has been at Columbia. She added she has not received any complaints from transgender students within the last couple of months.

Regarding students being misgendered by professors, Mosby-Holloway said she may never be able to see the total number of reported complaints the office has received.

Lexington Lawson served as the coordinator of the former Office of LGBTQ Community and Culture at Columbia for about a year until leaving in 2016. Lawson said the college was creating a bias-reporting system that would help track complaints of any nature.

The college has experienced changes since Lawson left. The former Multicultural Affairs Office became SDI in Fall 2017. SDI currently has two employees, in addition to those employed in the Academic DEI Office, which works closer with faculty.

The reporting database was part of a five-year advocacy plan, which included the Gender Inclusive Initiative, Lawson said.

The college does not have a bias-reporting database in place, according to an April 3 email from Lukidis.

A bias-reporting system can be different at every college, but generally, it is a database to log reported complaints. These databases can be used to track misgendering or incidents involving racial bias.

“We’ve had this on the agenda for a long time,” Lawson said. “What are they afraid of? Why are [they] afraid of confronting this?”

Lukidis said she spoke to multiple people who were at the college during the alleged planning of the bias-reporting system. She said they had no knowledge of the database Lawson mentioned, though the News Office denied The Chronicle the opportunity to verify that directly with staff members who may have worked with Lawson.

SDI is a programming office that uses data—such as reported complaints— they receive from the college to create successful programs. Without clear numbers, the office is “poking in the dark,” Mosby-Holloway said.

Just because institutions have zero complaints does not mean the student population is thriving, said Naseeb Bhangal, assistant director for race and ethnicity education at NEIU, who previously worked at Loyola University Chicago and Gonzaga University.

“My rule of thumb is [not to] wait for complaints to prompt [concern] about certain communities,” she said.

She noted institutions are data-driven, and an influx of complaints will help universities focus their resources. If an institution is receiving fewer complaints from one student population compared to another, they will focus on the group of students with more complaints, regardless of the issue, Bhangal said.

There are other factors that could limit student complaints, such as unfamiliarity with administrators or students complaining to trusted individuals rather than staff in diversity offices, Mosby-Holloway said.

When students make complaints to the correct offices, the complaint can move down different pathways.

If students believe the incident was malicious, the complaint will be taken to human resources, which has a paper trail. Although Mosby-Holloway and others at Columbia said they were not aware of the bias-reporting system Lawson referenced, she said she likes to keep track of complaints even if the student does not think the incident was malicious.

“I always want to make sure a student has complete agency over their experience,” Mosby-Holloway said.

In 2015, the college began implementing initiatives stated in its Strategic Plan, including several diversity goals and commitments, scheduled to be completed
in 2020.

The Higher Learning Commission recently applauded Columbia for its commitment to making diversity, equity and inclusion an essential part of students’ educational experience, as reported March 18 by The Chronicle.

Mosby-Holloway said Columbia is working on a couple programs to ensure transgender students feel more welcomed and comfortable. She helped create The Rack, which helps students find professional clothing that fits within their gender identity, and Careering While Queering, an LGBTQ career advice event.

In the fall, SDI will offer a week-long queer health and wellness workshop.

“Diversity, equity and inclusion has to be systemic, and it has to be sustainable,” Mosby-Holloway said. “Every single person in every single department has to have some buy in. They have to be committed to education and to serving our students.”

Mars Robinson contributed to this report.