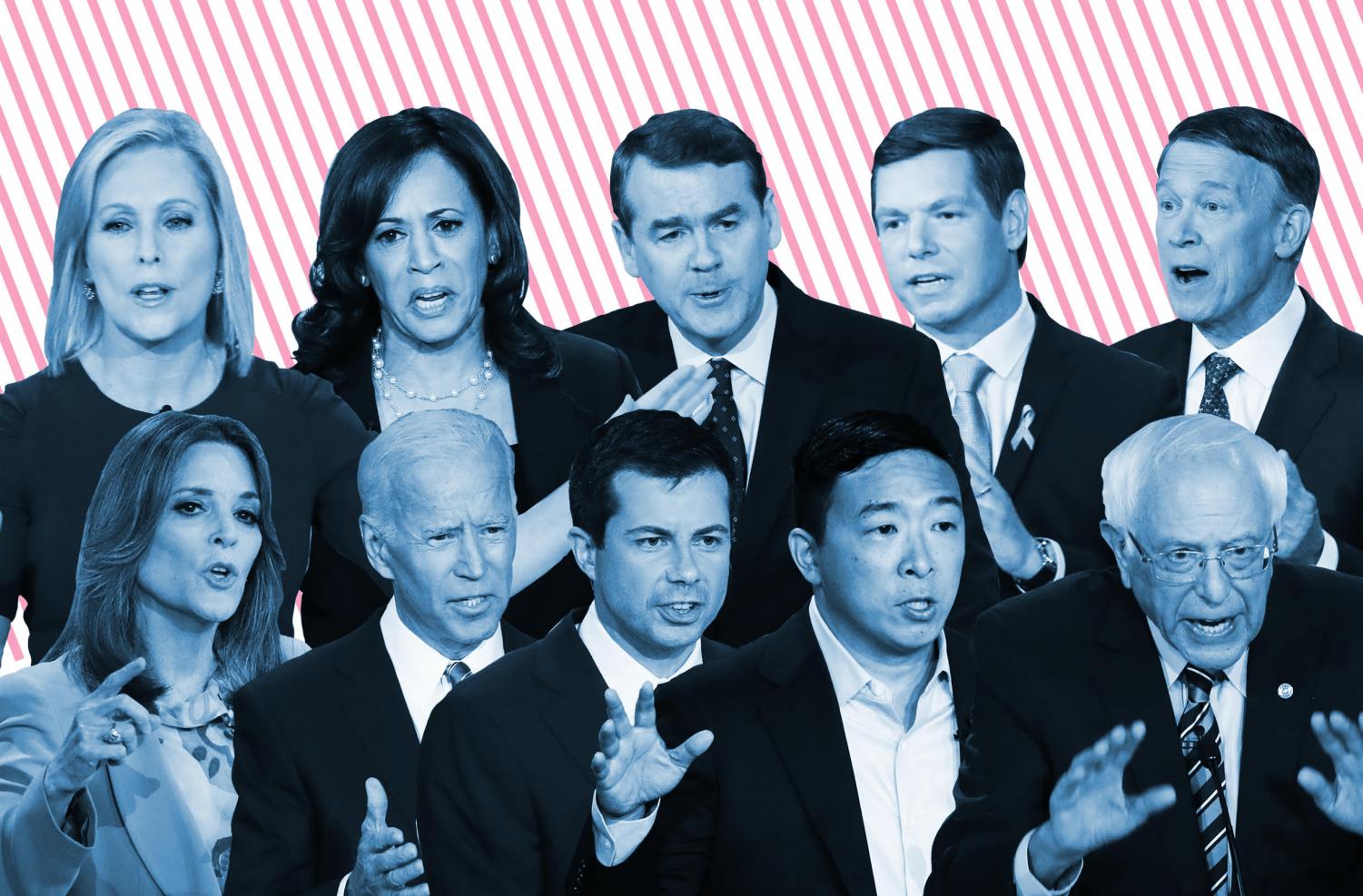 Candidates sparred onstage on issues ranging from race relations to healthcare in night two of the first Democratic primary debates of the season. Photos by Wilfredo Lee / AP (Shane Tolentino)

Candidates sparred onstage on issues ranging from race relations to healthcare in night two of the first Democratic primary debates of the season. Photos by Wilfredo Lee / AP

Amid cringe-worthy moments from Thursday night’s Democratic presidential primary debate, were numerous bickering matches between big-name candidates who took aim at each other on issues ranging from race relations to ageism.

Within the first ten minutes, interruptions and attacks had already begun.

“America does not want to witness a food fight. They want to know how we’re going to put food on their table,” Harris said, interrupting a heated and sprawling exchange mainly between Biden and California Rep. Eric Swalwell on leadership in the party, along with others including Sanders, Buttigieg, New York Sen. Kirsten Gillibrand and author Marianne Williamson soon joining the fray.

In the aftermath of the South Bend shooting of a black man June 16 by a police officer whose body camera was turned off, Buttigieg has received criticism not only for his light-handed response, but also for his inability to restore race relations in the city during his time as mayor. As such, it came as no surprise when the first race relations question of the debate was aimed at Buttigieg.

His response onstage was something Americans rarely hear from politicians—a sweeping apology.

“I couldn’t get it done,” Buttigieg said, referring to repairing relations in the city. “I could walk you through all of the things we have done as a community, all the steps we took from bias training to de-escalation, but it didn’t save the life of Eric Logan. And when I look into his mother’s eyes, I have to face that fact that nothing I say will bring him back. Until we move policing out from the shadow of systemic racism … we will be left with a bigger problem, of the fact that there’s a wall of mistrust put up one racist act at a time. I’m determined to bring about a day when a white person driving a vehicle and a black person driving a vehicle, when they see a police officer approaching, feels the exact same thing, a feeling not of fear but of safety.”

Swalwell was quick to bite back, demanding to know why Buttigieg did not fire the police commissioner.

Harris, who pointed out she was the only African American onstage, confronted Biden over comments he made last week on his alignment with two segregationist senators who fought student busing in the ‘70s.

“It was hurtful to hear you talk about the reputations of two United States senators who built their reputations and career on the segregation of race in this country,” Harris said to Biden.

Biden called the response a “mischaracterization” of his stance on busing, but ultimately cut himself off to allow the debate to switch topics.

The issue of immigration remained centerstage for the second debate. When the 10 candidates were asked whether they would make illegal crossings at the border a civil offense, rather than a federal one—an idea former Secretary of Housing and Urban Development Julián Castro brought to the forefront of Wednesday night’s debate—all but Colorado Sen. Michael Bennet, with a half-decided hand raise from Biden, said they would make illegal immigration a civil offense.

“I will ensure that the microphone that this president of the United States holds in her hand is used in a way that is about reflecting the values of our country and not about locking children up,” Harris said. The words “her hand,” received rousing applause from the audience.

Buttigieg used his response opportunity to condemn Republicans, who support the detention of children without soap or toothbrushes, for being religiously hypocritical.

“For a party that associates itself with Christianity, to say that … God would smile on the division of families at the hands of federal agents, that God would condone putting children in cages, [the Republican party] has lost all claim to ever use religious language again.”

All ten candidates on the floor also agreed by a show of hands, that their healthcare plans would cover undocumented immigrants.

President Donald Trump was quick to condemn the Democrats on Twitter, writing: “All Democrats just raised their hands for giving millions of illegal aliens unlimited healthcare. How about taking care of American Citizens first!? That’s the end of that race!”

With both the youngest and the oldest Democratic presidential candidates onstage—at 37, Buttigieg is the youngest contender and at 76 and 77 Joe Biden and Bernie Sanders are the oldest, respectively—the generational divide was stark.

“Joe Biden was right when he said it was time to pass the torch to a new generation of Americans 32 years ago,” Swalwell, 38, said, to which Biden replied: “I’m still holding onto that torch.”

“The issue is, who has the guts to take on Wall Street, to take on the fossil fuel industry, to take on the big money interests who have unbelievable influence over the economic and political life of this country?” Sanders said onstage.

On the outskirts of the stage Thursday night were former Colorado Gov. John Hickenlooper and businessman Andrew Yang.

The next Democratic debate will be hosted by CNN July 30, and will most likely feature a slightly smaller number of candidates who qualify based on polling and fundraising mandates. The Iowa caucuses are scheduled for Feb. 3, 2020, and the Illinois primary election will take place March 17.