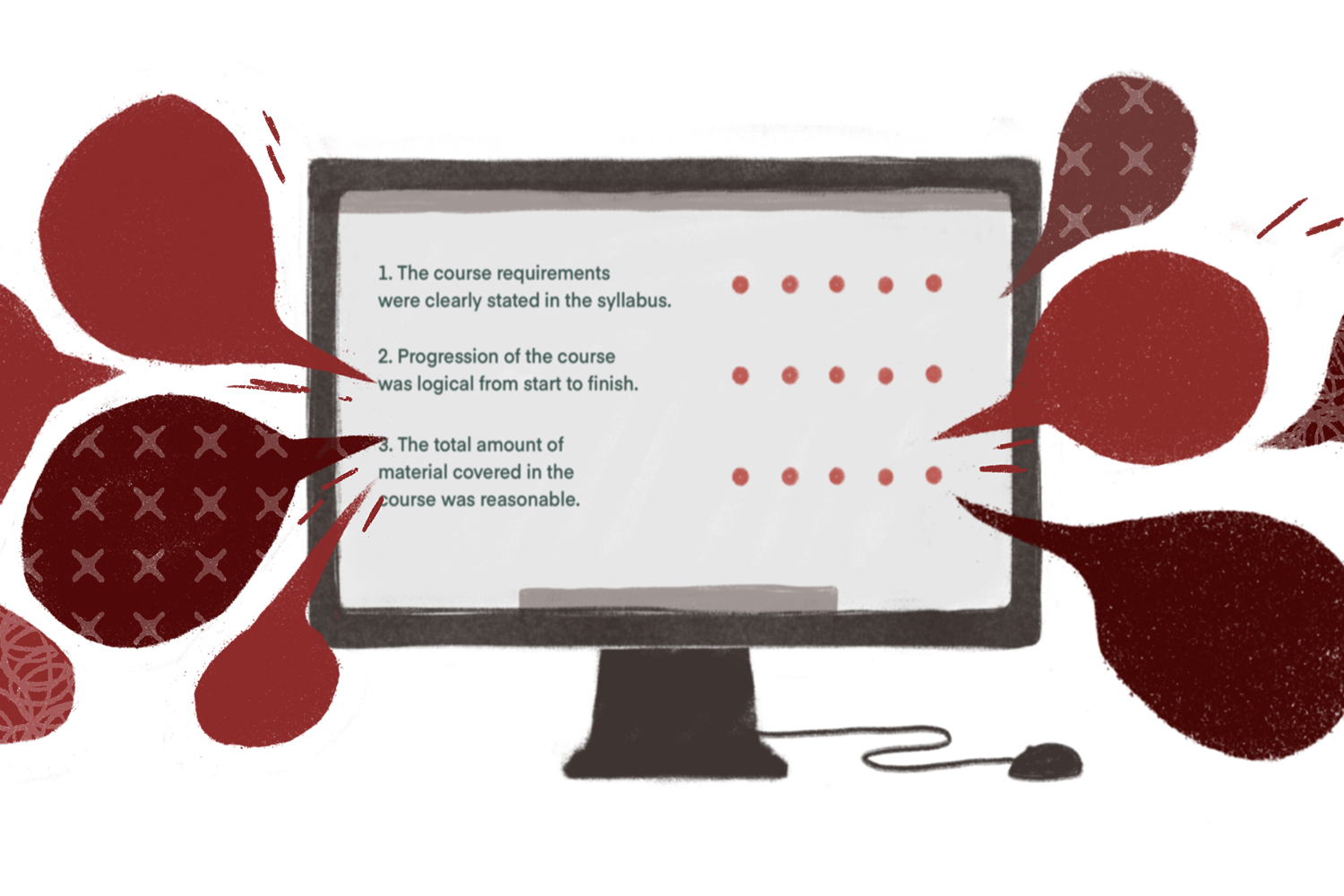 When students fill out evaluations of professors at the end of each semester, their feedback weighs into decisions affecting that professor’s employment status and financial earnings. Often, though, evaluations are biased against female instructors and instructors of color.

One former Columbia instructor in the Cinema and Television Arts Department is suing the college because he alleges biased student evaluations played a key role in his termination.

Professors on the tenure track are evaluated multiple times, and then again when the department decides whether they will receive tenure. When deciding their employment status, Faculty Senate President Sean Johnson Andrews, an associate professor in the Humanities, History and Social Sciences Department, said instructors are evaluated based on teaching, scholarship and service, with student evaluations playing a critical role in the teaching category.

Vaun Monroe, a black, former tenure-track professor in the then-Film and Video Department, now titled the Cinema and Television Arts Department, taught a handful of classes on the intersection of performance and race during his time at Columbia from 2007 to 2014.

Currently, Monroe is the executive director of the Nate Parker Film and Theatre Conservatory and caucus chair of Diversity and Inclusion for the University Film and Video Association at Wiley College in Marshall, Texas.

Monroe is suing Columbia and Bruce Sheridan, a professor in the Cinema and Television Arts Department, for racial discrimination against him which ultimately resulted in his 2014 termination, the suit alleges, as reported by the Chronicle Oct. 23, 2017.

In 2008, Monroe discovered a student created a website, “Black Supremacy (Now with a Photo of the Beast!),” that featured a photo of Monroe with “vile racist screeds” aimed at him. The suit alleges no action on Sheridan or Columbia’s part was taken against the student, who was ultimately permitted to fill out an evaluation of Monroe at the end of the semester.

Additionally, some students in Monroe’s “Adaptation” film course disliked extensively discussing race in the classroom. One student wrote in their evaluation, “We spent far too long nearly every week talking about issues of race,” while another student wrote, “If I wanted to take a class about African Americans and Film, I will (sic) sign up for it,” the lawsuit alleges.

Those evaluations were then used during Monroe’s evaluation meeting after his first year teaching at Columbia with Sheridan, who was the department chair at the time. Monroe alleges Sheridan “belittled and dismissed” his explanation of biased evaluations during the meeting, and that Sheridan said he was “not assuming responsibility for [his] classroom” and “playing the race card,” according to Monroe’s lawsuit.

“The college is aware that Mr. Monroe was displeased with the outcome of his employment at Columbia but there is no evidence to support his allegations of discrimination,” said Lambrini Lukidis, assistant vice president of Strategic Communications and External Relations, in an Aug. 5 email statement to the Chronicle. “The Equal Employment Opportunity Commission conducted an investigation and concluded there was no reasonable cause to support his allegations of discrimination.”

Filed Aug. 10, 2017, the lawsuit is currently awaiting a judge’s ruling on Columbia’s motion for summary judgment before potentially going to trial no earlier than fall 2019, Monroe’s attorney Tom Rosenwein said.

The American Association of University Professors sent a letter to President and CEO Kwang-Wu Kim in 2014 concerning Monroe’s tenure case, according to AAUP’s Associate Secretary Anita Levy. It recommended Columbia amend its Faculty Manual to include a policy allowing faculty members to appeal employment decisions based on discrimination, and urged the college to reevaluate Monroe’s case through a hearing in front of a faculty committee.

Levy said the “impermissible inconsiderations” Monroe faced in the tenure decision caused the AAUP to reach out.

To Levy’s knowledge, neither an amendment nor reevaluation occurred.

When considering raises for faculty, Johnson Andrews said the college uses a merit-based point system, where raises are given to the “best” faculty using student evaluations.

Because “inherently flawed” student evaluations are used in making tenure and raise decisions, Johnson Andrews said it is possible the evaluations have also contributed to a pay parity issue at the college, although this cannot be said definitively as data on professorial salaries are not public knowledge, as Columbia is a private institution.

In response to this issue, the Faculty Senate is creating a task force to recommend teaching evaluation changes by the end of the academic year to Senior Vice President and Provost Marcella David as she examines disparities at the college, Johnson Andrews said.

“In my experience … quite a few women and people of color … just get fed up with the environment and the problems, and they just go away. But I believe the current provost is trying to address this,” Johnson Andrews said.

Monroe’s experiences are not unique at Columbia.

Elio Leturia, associate professor in the Communication Department, has always thrived in the service and scholarship categories, but has never managed to flourish in the teaching category because of poor evaluations, which may be because of his strict teaching style, he said.

Around five years ago, Leturia, who has a Peruvian accent, had a student tell him in an evaluation to get a speech therapist. Since then, he asks students to ask him for clarification if his accent makes anything seem unclear.

“It is very unfair because no matter how hard I work, how much effort I make, how available I am … [I] always get poor evaluations in terms of teaching,” Leturia said. “I just want that disadvantage to be acknowledged. I know I have to work harder than my colleagues.”

Leturia said he received significantly better teaching evaluations in an online course because students are not biased by in-person aspects of teaching.

Although Leturia said DEI initiatives do a good job addressing bias at faculty and administrator levels, it also needs to recognize bias at the student level.

“I do the best that I can, but I know I have no control,” Leturia said. “I like teaching. … The greatest pleasure is when you see one of your students succeeding and seeing whatever you were part of [in] that experience, you contributed a little. That is the best satisfaction you can have. That’s why I stay.”

The Communications of the Association of Computing Machinery, the Public Library of Science peer-reviewed journal, the Journal of Higher Education, the Assessment & Evaluation in Higher Education and Higher Learning Research Communications have all published academic research concluding there is at least some bias based on race and gender in student evaluations.

Robert Hanserd, assistant professor in the Humanities, History and Social Sciences Department, said it is the evaluation approach itself that is biased, “problematic” and “lopsided,” as students who do not participate at all in class are still able to evaluate professors.

Hanserd said evaluations should play a factor in hiring and raise decisions but should be weighed equivalently with other components.

“The DEI initiatives that [are] really trying to get folks to think better about curriculum, part of that process … should encourage faculty to start to develop their own evaluations around what they’re teaching, evaluations that encourage students to be more honest about participation, or lack thereof, in the classroom,” Hanserd said.

Kathie Bergquist, adjunct professor in the English and Creative Writing Department, has experienced biased student interactions. Bergquist said oftentimes students enter the classroom with presumptions of an instructor based on their gender, sexuality or race, and when those stereotypes are not met, they may take it out on the professor.

Early in her professorial career, she noticed a comment on Rate My Professor, a public evaluation website, from an anonymous student that personally attacked her for her physical appearance. She strongly suspected it was a student whom she would not allow to eat a Subway sandwich during class. She had to request the comments be taken down, as they did not evaluate her teaching.

Still, student evaluations have an important role for instructors looking for feedback on how to become a better teacher and for weeding out problematic professors, she said. However, Bergquist added, professors should have an opportunity to defend themselves against discriminatory student evaluations before they affect their employment.

As the national conversation on recognizing bias ramps up, Raquel Monroe—co-director of the Academic Diversity, Equity and Inclusion office and associate professor in the Dance Department—said evaluations are beginning to lose weight in some tenure decisions.

When she first became a graduate student instructor, Raquel Monroe said evaluations from her students would say they were “intimidated” and “afraid” of her, but later discovered she was “cool.” These comments tend to continue today for her, despite a majority of positive feedback.

However, students also criticize the academic discussion on the intersection of racism, sexism and homophobia in her course curriculum by challenging the academic research she presents as “opinionated” and suggest separating black artistry into a different course.

Biased evaluations can weigh on an instructor’s psyche because it criticizes them based on predispositions, not on their teaching style, which is what the evaluations are meant for, Raquel Monroe said. Knowing she should include more visuals for visual learners is far more helpful than knowing she is intimidating upon first meeting, she said.

Raquel Monroe added that some female faculty members of color will have their colleagues read through evaluations and then select the most useful ones for them to view.

Student Government Association President Kierah King, a senior dance major, said many students do not know how important evaluations are for professors, which is why students need to take more time and consideration when filling them out and why evaluations should not be used in tenure and raise decisions.

“Growing with faculty and hearing how much evaluations truly do affect what they do, their work and how they evaluate their classes, and even change and shift their classes going to the next year, I’ve come to realize how much evaluations really do affect and change a faculty professor’s classes,” King said. “Telling students how important [evaluations are], we’re affecting our curriculum, our community, as well as generations to come.”

Jackie Spinner, an associate professor in the Communication Department, said even from a student’s perspective, the evaluation process is flawed as they occur at the end of the semester when students have already endured a professor.

Spinner said teaching critiques are based off cultural stigmas. She knows she would be perceived differently as a male instructor without having to change her teaching style because of the “b—h” cultural stigma surrounding assertive, “demanding” women, she said.

As the college attempts to be a leader in DEI initiatives and under the helm of a new provost, Spinner said the college needs to look for solutions to the evaluation process and take the weight of them out from tenure and raise decisions.

“It shouldn’t matter if I’ve been directly impacted by the bias, I still feel a responsibility to my colleagues to stand up against this,” Spinner said. “It’s horrible, they’re racist, they’re sexist. The evidence shows that, and the college won’t confront that. … We’re spending so much energy trying to get rid of the bias in our institution, and we have not had the courage yet to just reject student evaluations … [as biased].”