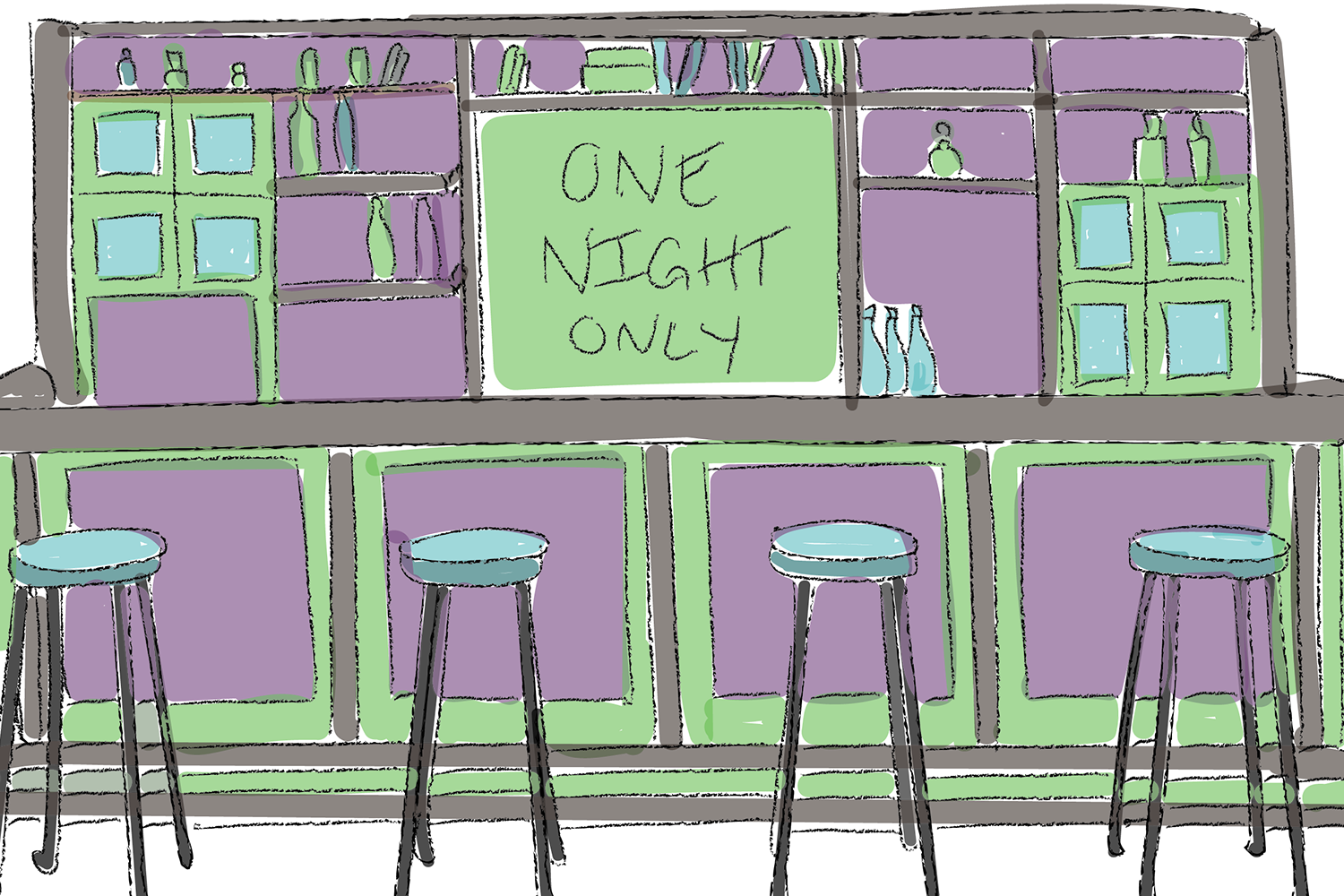 Story by Miranda Manier, visuals by

Derek Berry created a Facebook event page in February 2016 simply to pull together some ideas. He had only loosely discussed his latest idea—a pop-up diner and bar inspired by the hit TV show “Saved by the Bell”—with his business partners earlier that day. It was nowhere near fully realized.

When he woke up the next morning, 25,000 Facebook users were interested in the event, and “The Today Show” announced his half-baked, vague idea as a reality.

The sudden, viral interest in pop-up concepts like Berry’s is not an isolated incident, though it was one of the first. Emporium Logan Square, 2637 N. Milwaukee Ave., attracted national attention when it launched a pop-up bar inspired by the Netflix original series “Stranger Things” last fall, and FitzGerald’s Nightclub, a bar in Berwyn, Illinois, ticketed and quickly sold out its one-night “It’s a Wonderful Life”-themed pop-up on December 27, 2017, when about 12,000 people expressed interest in the Facebook event.

Pop-up bars like these, often inspired by trends, characters or locations in pop culture, have been sprouting around the country for years with increasing popularity and media attention.

A pop-up antecedent, the underground supper club, started appearing in Chicago around 2010, according to an October 2010 article by TimeOut Chicago. Hosted infrequently with surprise locations, these events were actually a way for young chefs to gain a foothold in the Chicago dining scene without the expense of establishing a restaurant.

These clubs paved the way for today’s above-ground establishments: pop-up retail and bars.

When Berry’s “Saved by the Bell” diner, Saved by the Max, opened in June 2016, it sold out every table on every night of its original one-month run. Berry said he and his partners decided to extend the run another two months, but those tickets sold out just as quickly. Before they knew it, Berry said they were open a full year, with each night sold out.

Modeled after The Max, a diner that was the go-to hangout in “Saved by the Bell,” Saved by the Max was an accurate replica, with bright neon signs and a funky ’90s aesthetic. The menu was also dotted with fun touches, with items like Mac & Screech and Lisa Turtle milkshakes.

Mark Kwiatkowski, owner of Replay Lincoln Park, 2833 N. Sheffield Ave., was among the unlucky who didn’t score a ticket. When he saw the excitement generated by the pop-up, he managed to squeeze into an after-hours opportunity for drinks at the diner’s bar. He knew he had to pounce on the trend and “dressed up” Replay as Moe’s Tavern from “The Simpsons” for Halloween 2017.

The upstairs event space at The Rookery, 209 S. LaSalle St., hosted a pop-up in February and March that paid homage to “The Shining.” It featured a full transformation into The Overlook Hotel in “The Shining,” with a lookalike rug, wallpaper and even light fixtures. The pop-up even had actors milling around the bar as characters from the movie.

Marcus Reidy, a bartender at FitzGerald’s and a creative force behind its “It’s a Wonderful Life” pop-up, said pop-ups offer a fun, compelling experience while combining attractive concepts.

It’s not just customers who are drawn to pop-ups, but bar owners too, who get to test concepts, Montgomery said.

“In [your regular space], you have something you’re presenting on a regular basis,” he said. “A pop-up gives you [an] area of creativity. You have this canvas you can go do something with, and you know it’s going to be short.”

The pop-up bar’s limited availability can attract and excite patrons as well, as Montgomery learned when The Rookery advertised its pop-up for only four weeks despite planning to extend it. Montgomery said he eventually saw lines around the block slowly slim down over its extended eight-week run.

Jill Kaye, programming events producer at Chicago Athletic Association Hotel, 12 S. Michigan Ave., has helped the hotel put on several pop-up bars that have explored Chicago history and culture, such as a February 2017 collaboration with The Field Museum.

She finds the time constraint to be part of what makes pop-ups so exciting.

“Concentrating the run times of these bars to something that is smaller scale lets people leave knowing that they got to be a part of something that’s special and unique and fleeting,” Kaye said.

Why do venues limit the run of concepts that get so much heat and attention? Kwiatkowski explained it to his mother like this: Would you see the same movie over and over again?

Saved by the Max moved to Los Angeles after its yearlong run in Chicago to test the waters in a different market and to keep the concept fresh for its audience, according to Berry.

“I’m not sure how many times people are going to come back to a themed diner,” he explained. “Unless you’re planning to theme something that’s super general and can always be reinvented, a pop-up [is] the way to go.”

Reidy agreed that themed concepts, particularly those that lean toward pop culture, are best suited as pop-ups rather than permanent fixtures.

“[Keeping a themed pop-up open] would be like that restaurant that celebrates New Year’s Eve every day,” Reidy said. “Eventually, you would go insane. The fact that it’s fleeting is part of the charm of it, part of the desire for people to take part.”

The longer a pop-up is open, the longer it also opens itself and its owners to the legal consequences of unauthorized use of a copyrighted work.

That has been an obstacle for several pop-up bars in Chicago, including Saved by the Max, which quickly struck a mutually beneficial deal with NBC, intellectual property holder of “Saved by the Bell” to avoid legal action.

Emporium’s “Stranger Things” pop-up was not so fortunate. Set pieces hung from the ceiling, creating a literal “Upside Down” effect, and Christmas lights and letters of the alphabet decorated the walls, alluding directly to sets from the show.

This accuracy earned the pop-up a cheeky cease-and-desist letter from Netflix toward the end of its run, however, which read, “Look, I don’t want you to think I’m a total wastoid, and I love how much you guys love the show. But unless I’m living in the Upside Down, I don’t think we did a deal with you for this pop-up.”

Replay Lincoln Park also faced consequences for its “It’s Always Sunny in Philadelphia” pop-up in March, though it was able to negotiate reasonable terms that included referring people to watch the show on FXX, or directing them to the channel’s website to purchase merchandise, the owner said.

According to Margit Livingston, professor of law at DePaul University, while concepts and ideas are not subject to copyright, the expression of them is. So, while a pop-up might be able to get away with recreating the atmosphere of a neighborhood bar à la “Cheers,” any specific characters or details from the show could get them in trouble.

Livingston added that under the fair use doctrine, copyrighted material being used for a new purpose or as satire or parody could allow a pop-up more creative license, but ultimately, she said, the bars would be best off communicating with the intellectual property holders upfront.

The transient nature of pop-ups can also make them ideal for those who want to dip their toes into the bar business without fully committing to it.

“It’s less risk if you’re not incorporating your own space, or you have friends that have bars and you can open your concept in their bar without committing to your own space or purchasing your own liquor license,” Reidy said. “It’s easier for [The Roosevelt Room], financially and practically, to do these pop-ups…than it is to open a bar right now.”

Impermanent, exciting and high in demand, pop-ups seem to be increasingly the way of the future, both in Chicago and all over the country.

“People are looking for experiences,” Montgomery said. “They’re looking for things that are unique. The days where you could open a bar and sell a handful of drinks are gone.”