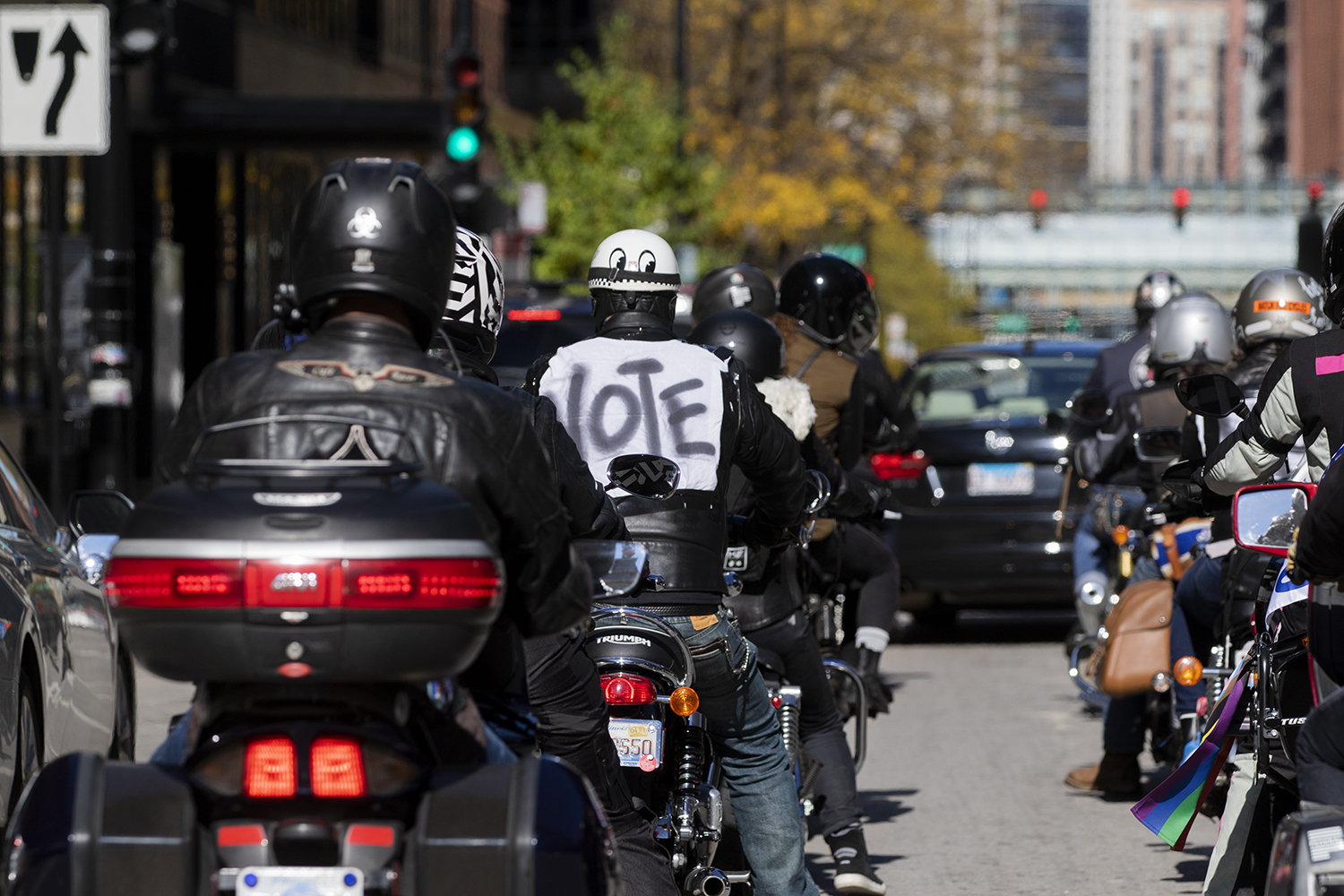 Bikers from Ride to the Polls cruise down Van Buren Street to their first stop at Union Station. (K'Von Jackson)

Bikers from Ride to the Polls cruise down Van Buren Street to their first stop at Union Station.

Chicago motorcyclists ‘Ride to the Polls’ to encourage voting

By Camilla Forte, Director of Photography

Rumbling engines cut through the brisk morning air as more than a dozen bikers gathered to take part in Ride to the Polls, a voter mobilization effort organized by Black Girls Ride, Engines for Change and other partners in cities throughout the country.

On Saturday, Oct. 24, motorcyclists rode from Good Call Moto, a motorcycle merchandise shop in the West Town neighborhood, to Union Station, 225 S. Canal St., to drop off mail-in ballots and raise awareness for voting in the upcoming presidential election.

The recent event was put together by Engines for Change organizer Katie Stamaris and was the first of its kind in Chicago.

“Engines for Change really set up the nationwide structure for what we’re doing, and then every city that’s participated has done something unique,” Stamaris said.

The national Ride to the Polls initiative was created by Porsche Taylor, editor-in-chief of Black Girls Ride, a magazine representing black women in motorcycling, in collaboration with Kirsten Midura, founder of Engines for Change and other motorist organizations. Taylor and Midura connected during the Black Lives Matter March on Washington in August.

At the March on Washington, Taylor spoke to activists across the country about the Ride to the Polls initiative with the aim of creating a reoccurring, nationwide movement to encourage civic engagement among motorcyclists.

“We want to be able to show people there are motorcyclists who care about civil rights and equality for everyone,” said Midura.

For Chicago’s Oct. 24 event, Stamaris rallied participants through community outreach. She laid the groundwork by reaching out to members of various local biking clubs, who then helped spread the word within their own communities.

While the general mission of the event remained central to the ride, Stamaris said some adjustments were made to ensure compliance with COVID-19 regulations. But, bikers were still able to come together before the ride to catch up and exchange ideas for a ride plan.

Following the bikers’ stop at Union Station, they rode as a group in a giant loop across the city to promote voting.

Several riders were decked out with flags and stickers on their bikes and jackets in support of the Black Lives Matter movement and LGBTQ+ rights.

At stoplights and intersections, bikers interacted with pedestrians and fellow motorcyclists, who waved and honked in support.

While a few bikers were there to drop off their own mail-in ballots, many in attendance had already sent out ballots or planned to vote in-person on Election Day.

David Salk, a biker from the Town Up Chicago riding club, came to motivate the public to send their ballots in and communicate the importance of voting to the community.

To Salk, the lack of voter turnout in 2016, especially among young people, was particularly upsetting.

“I’ve voted ever since I could,” said Salk. “I’m pretty pissed at the students because … it took you guys a long time to wake up. ”

Gail Swanson, a biker who rode in from the North Center neighborhood after hearing about the event through Facebook, is passionate about dispelling stereotypes surrounding the biking community.

“I think there’s unfortunately a reputation of motorcyclists being quite conservative and right wing … and I’m definitely on the other side of that,” said Swanson.

She said it is important for her to represent the diversity within her community.

With the hope of maintaining the initiative’s momentum, bikers with Engines for Change will continue to ride to the polls nationally up to Election Day, with upcoming rides planned across the West Coast in the coming weeks.

Stamaris said she hopes the Ride to the Polls gatherings will serve as a catalyst for greater civic involvement, rather than being an isolated event.

“I want [the] West Loop and Chicago to have a lot of opportunities to gather as a community,” said Stamaris. “I think politically what we’re all learning is the importance of getting more involved on a much more micro level.”