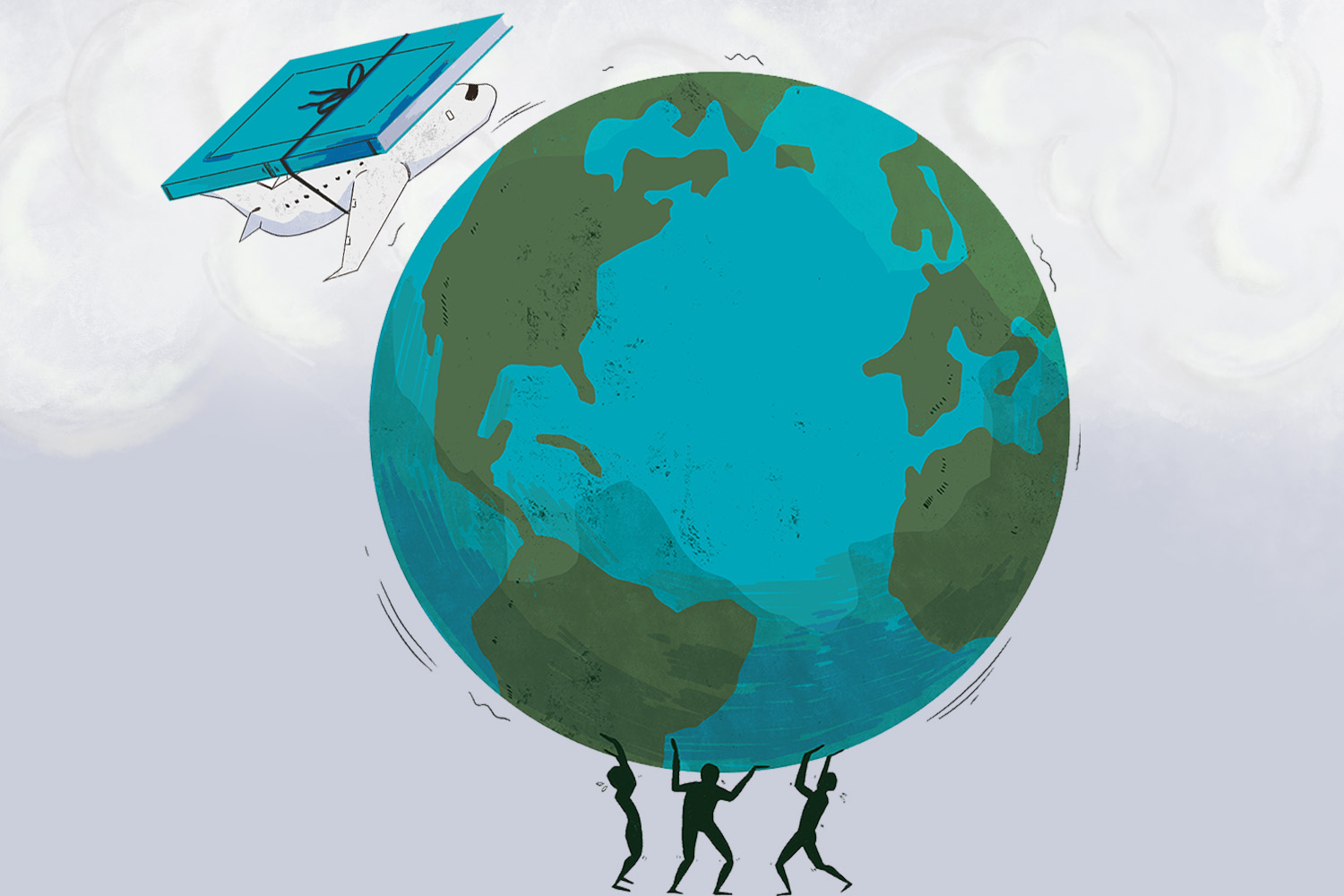 ‘Challenging task at best’: Global Education carries on after reorganization

Five months after almost half of the staff members in the Global Education Office were terminated, the office remains understaffed, causing  a sense of disarray among students who relied on the office and staff responsible for assisting them.

One remaining staff member sent an email to more than 30 faculty and staff who worked with Global Education, pleading for help with an office in chaos.

“All study abroad programming responsibilities have fallen to me with very little training and information provided to me by [former employees] before their departure,” Assistant Provost of Global Education David Comp said in the Sept. 11 email. “This includes all administrative tasks falling to me such as paying invoices, coordinating interviews with director candidates and everything in between, as I have no administrative assistant.”

The Chronicle made multiple attempts to interview Comp, but the News Office intervened and said Comp was not available for an interview.

In May, four employees were terminated when their positions were eliminated, as reported May 22 by the Chronicle. Now, the five employees who remain in the office work with the more than 300 international students currently enrolled at the college in addition to Columbia students studying abroad. The college does not have registration figures on the number of students studying abroad, but plans to track it in the future.

“We made sure that every student who traveled abroad on any college program was registered in that system,” he said.

Chakoian said the college may not have the numbers if employees in the office do not know how to use the software.

Lukidis said Comp has access to the study abroad system.

In her first collegewide address Aug. 19, Senior Vice President and Provost Marcella David said she would like to expand study abroad opportunities.

Lambrini Lukidis, assistant vice president of Strategic Communications and External Relations, said in a Sept. 12 email to the Chronicle that the college is committed to supporting its international and study abroad students.

“In fact, the recent re-organization of Global Education was a strategic move to better support the department and expand its footprint,” Lukidis said.

A plea for help

In the two years he has been at the college, Comp in his email said he was not involved in administrative tasks with faculty-led study abroad and exchange programs, which were previously carried out by the employees who were terminated over the summer.

Comp has one “moderately helpful” student worker in the office, according to his email.

“Every step for both faculty-led and exchange programs is new to me,” Comp wrote. He added that the new responsibilities, such as going through databases and systems he was not familiar with, are taking “a tremendous amount of time.”

Comp said in the email former employees “placed important program information” in separate databases, and it is “a challenging task at best” to gather it all. Comp also asked email recipients for specific program descriptions for faculty-led programs.

Susan Strow, former director of International Admissions and Recruitment, left Columbia Sept. 27 for a job at the Illinois Institute of Technology. In her time with Global Education, she was convinced the college was invested in the program and noted strategic marketing and enrollment management offered a lot of support.

Strow performed a variety of tasks, from recruiting students to supporting them on-campus, and said her job was “full-time plus.”

These actions were taken because international student enrollment and study abroad options are “critical parts” of the college’s plan, Lukidis said.

Lukidis said David and Joseph were unavailable to comment.

Last year, Brian Shaw—a professor in the Theatre Department who helps coordinate international exchange programs for theatre students—would speak with staff in the Global Education Office on a weekly or biweekly basis. However, this semester, Shaw said communication with Global Education has decreased, as he does not want to overburden the employees.

The Theatre Department partners with about five international institutions and was in the process of developing another exchange program. Shaw said progress was being made last semester, but after much of the Global Education staff was terminated, the plans to partner with the institution are in limbo.

“I have no idea what, or if, there is a plan for growth or further development,” he said. “It feels like we have students out in the world, and I hope nothing falls through the cracks.”

Shaw said the department’s international studies were otherwise running smoothly, but said there are always unpredictable issues that arise.

Kathie Bergquist, adjunct faculty in the English and Creative Writing Department, was abroad with students when she learned of Global Education’s reorganization.

Bergquist is the program manager for the English and Creative Writing Department’s Summer in Prague program and its Paris J-term program. She finds herself doing the little things this semester to prepare for the class, such as designing the J-term’s poster. Bergquist does not have graphic design experience.

“That’s what we have to do to get the word out to the students,” she said. “The posters have to happen.”

She is also gathering “legal compliance forms” for her courses. Bergquist has faith the administration has the students’ best interest in mind.

“We are all committed enough to the work that we are doing and [are] competent enough professionals to flow with it while things sort themselves in Global [Education],” Bergquist said.

Last semester, the Global Education Office assisted Associate Professor and Chair of the Communication Department Suzanne McBride with her Ireland J-term course. Chakoian played an important role in coordinating faculty-led programs, McBride said, but Chakoian is no longer at the college.

McBride—like Bergquist—is now handling the application process for her Ireland J-term course, a task she also handled before the Global Education office was established.

Alex Riepl Broz was the assistant director of Exchanges and Education Abroad until his position was eliminated this summer. He and Chakoain would coordinate with faculty-led programs and international-partner institutions. Broz helped build and manage partnerships with around 20 institutions worldwide.

Broz helped the college retain an estimated $500,000 in tuition annually from exchange and study abroad programs, he said.

Broz would help ensure study-abroad credits transferred properly and checked in with students as needed. During the 2015 terrorist attack in Paris, Broz coordinated with students abroad to make sure everyone was safe.

Because of the current situation with staffing cuts, the Study Abroad Fair was canceled by Global Education this semester, according to Comp’s Sept. 11 email. The fair’s mission is to educate students on Columbia’s study abroad opportunities.

However, McBride said the Study Abroad Fair was too important to cancel. McBride, along with other department chairs, helped put on the fair, which was held Oct. 8. The event was done without the assistance of Global Education, she said.

“[It’s] a really great opportunity for students to learn about study abroad so they can make plans down the road to participate,” she said.

After the event, which attracted more than 100 students, McBride said more than 30 were interested in the Ireland J-term course she instructs.

Current and former employees are not alone in their concern surrounding Global Education initiatives, specifically with the future of the study abroad programs.

When Kevin Obomanu, former coordinator of International Student and Scholar Services, was terminated, he sent an email to international students letting them know he was no longer at the college because he felt so connected to them.

“What are we going to do now?” asked Ayako Kanroji, an international student from Tokyo and sophomore advertising art direction major, when she heard from Obomanu, whom she described as “very, very helpful.”

Lukidis said the college acknowledges transitional periods are difficult, and students bond with certain staff members in the office, but said staff currently in place are able to address students’ needs.

Obomanu helped coordinate events for the Buddy Program—a support system for first-semester international students—and he assisted with the International Student Organization and went on recruitment trips for the college.

Obomanu also focused on the social and emotional needs of international students by hosting events and speaking with students. Conversations ranged from discussing U.S. culture to speaking with Mexican students who were afraid to come to the U.S. under the Trump administration.

Kanroji, who is a member of the Buddy Program, said it held more activities in Spring 2019 before the cuts. She remembered the program hosting educational events, such as a session on the LGBTQ+ community for students coming from countries that are not as open about LGBTQ+ issues.

Tyra Guan, an international student from Beijing and junior arts management major, also noticed fewer cultural events hosted by the Buddy Program. She recalled having “party dinners,” where students would eat food from their home countries and talk about their cultures. Event planning used to be done, in part, by Global Education staffers.

“There [are] not so many familiar faces around,” Guan said.

Júlia D’Aló, an international student from Brazil and sophomore acting major, feels less supported by Columbia in the wake of the terminations.

“When everything happened, it did affect me [emotionally],” she said. “I felt as if the college was letting me down.”

Kanroji, along with international students in the Buddy Program, sent an email to administrators stating the staff in Global Education was a valuable resource to them and that administrators made a mistake in eliminating their positions. Kanroji did not receive a response, but Lukidis said students with specific questions were responded to.

“We are forecasting strong growth in the number of international students, and the organizational changes we made last week are designed to best support that goal,” Blum Malley said in an email response to the students’ May 24 message. “Growing international-student enrollment and solidifying education-abroad options are critical parts of our plans moving forward.”

It was a “huge mistake” to lay off employees from Global Education, said Samuel Cox, 2019 audio design and production alumnus, because employees such as Broz convinced him to study abroad, where he learned a lot from his experiences.

Cox studied abroad twice and said he would do it again.

“Our relationship and interaction with the international community are incredibly important,” he said.

“Right now, everything is functioning just enough,” Kanroji said. “At some point that is going to be an issue.”