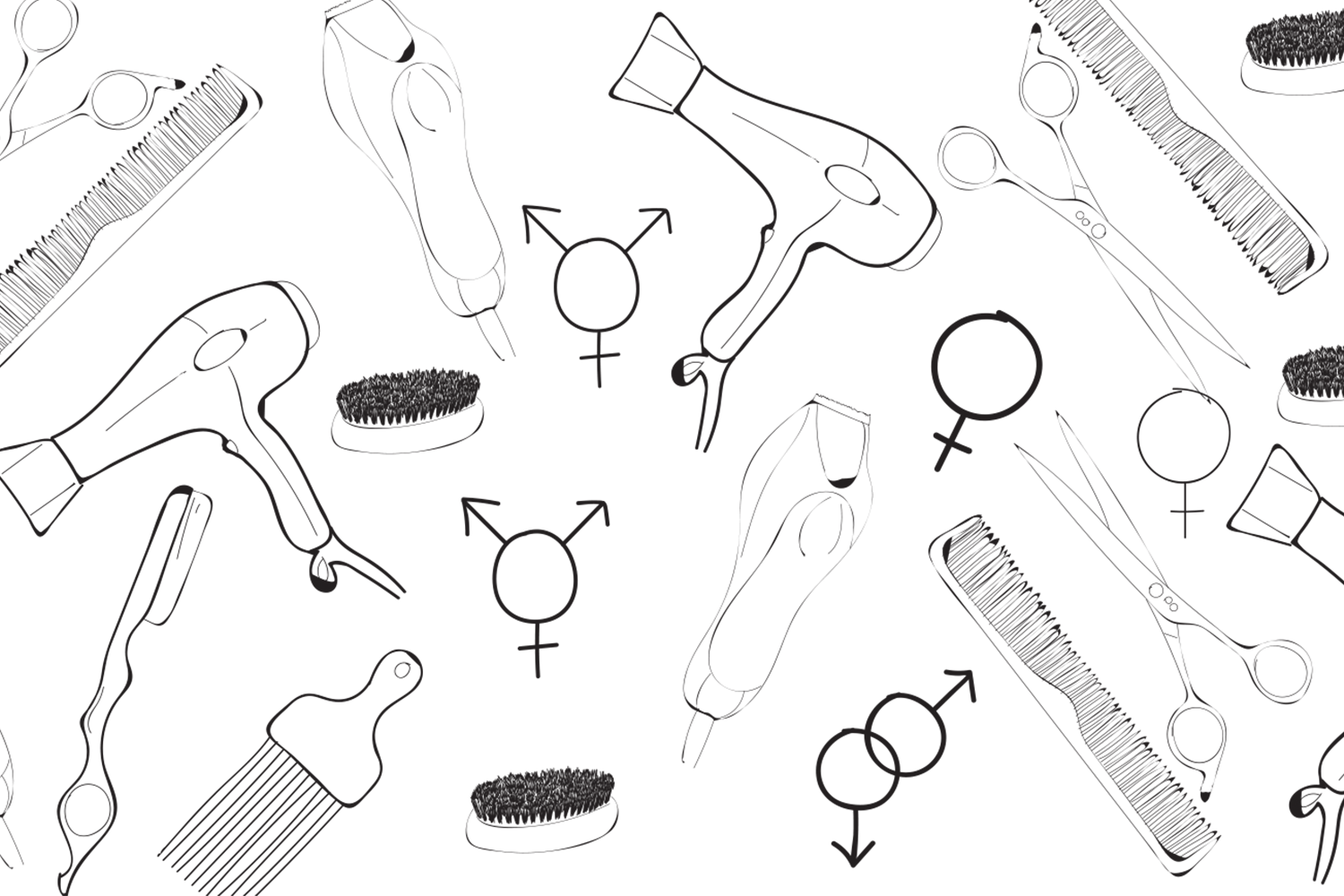 Hair is an art form, an act of expression for queer people. (Jocelyn Moreno)

Hair is an art form, an act of expression for queer people.

Undercuts, mullets and pixies, oh my! Queer hair is self-expression

“My hair actually clocked me as queer before I knew I was queer.”

Jackie Young, a barber at Barbara & Barbara, 2925 W. Diversey Ave., laughed at the realization. Before they started working at the queer-inclusive salon, Young experimented with increasingly short hairstyles. When they finally took a leap and shaved off the sides, they said, “That’s when queer people started noticing me, and I started noticing them. I was like, ‘What’s happening here?’”

This kind of ‘queer coding’ is something not only Young has experienced. According to an Aug. 9 InStyle article, certain hairstyles act like a ‘beacon’ within the queer community. Shaving the side of one’s head can silently communicate to other queer people they are among friends.

“I notice all the time when I’m walking down the street [if] someone has a nontraditional haircut for what their gender presentation is,” Young said. “We do the head nod, like, ‘Hey, I see you.’ It’s a way of being visible within the community.”

That tradition has been increasingly challenged for decades, especially by the  LGBTQ community in recent years.

According to Kim Fountain, CEO of Center on Halsted, an LGBTQ community center located at 3656 N. Halsted St., the relationship between queer people and their hair is often one of self-expression. When queer businesses discuss professional standards, for instance, they may allow colors or styles typically frowned upon by mainstream organizations.

“It comes down to authenticity,” Fountain said. “For a lot of queer folks, it is a matter of being able to be comfortable in our bodies and to express comfort in ways that make sense to us as individuals.”

Fountain said she expresses her gender nonconformity with her short hair and masculine style. However, a masculine presentation may look different for others; for example, her partner grows her curly hair out because it feels more low-maintenance.

The queer community rejects any singular definition for how ‘masculine’ or ‘feminine’ people should look. This kind of middle-ground is what Fountain said makes people outside the LGBTQ community uncomfortable.

“There’s [a] certain script we go through in the world that makes it easy for us to navigate it,” she said. “For a lot of heteronormative, cisgender culture [in the U.S.], women have longer hair, so it’s easy to not think about [someone’s gender] as you’re scanning a crowd or meeting somebody new. But if you have really short hair and you’re femme-presenting, people think, ‘feminist,’ ‘radical,’ ‘activist.’ And any of those things threaten the normative structures [our society has in place].”

“[Gender polarization] is this idea that we expect all of maleness and masculinity to be in one box and all of [femaleness] and femininity to be in another box, and we don’t expect them to overlap,” Beecham-Bautista said.

Hair is a prominent physical trait that can be seen from far away. Beecham-Bautista explained that the breaking of expectations—such as women having longer hair and men having shorter hair—can result in discomfort.

“We don’t want [people] to be ambiguous,” she said. “We want to [be able to] know where everyone stands.”

This prejudice can manifest in institutional roadblocks. For example, many people seeking nontraditional haircuts are met with pushback.

When Fountain lived in Vermont, she went to a barbershop where only one employee would cut her hair to the short, close-cropped style she wanted. If Fountain came in for a cut and that employee was not there, she was out of luck.

In Chicago, queer people have a few more options; for instance, salons such as Barbara & Barbara. Young said some of their clients have shared stories about  other barbershops where stylists have refused to give them a haircut that does not agree with the stylist’s assumptions about that person’s gender.

“People automatically assume people’s genders and gender identities, so they try to place what they think the other person’s gender identity is in a haircut,” Young said. “A lot of barbers are afraid to cut queer women’s hair, or nonbinary [or] trans people’s hair, because they’re afraid of doing it wrong and not actually understanding what the person wants.”

Young also wishes salons and barbershops would stop gendering their pricing. They said this causes stylists to assume a client’s gender as soon as they walk in the door, something they have learned not to do as part of the queer community.

Young hopes their peers will start asking clients more specific questions about their desired cut, their name and their pronouns. That would open the door to a conversation, rather than stylists misgendering clients, using the wrong name, or trying to talk clients out of certain haircuts because of their own uncertainty or fear.

“It’s a really weird feeling to sit in a chair, ask for what you want and have somebody be like, ‘Are you sure? It doesn’t seem like you actually want that,’” Young said.

Zacy Hickey, an online student at the University of Calgary, faces plenty of reactions and obstacles for her hair, though she does not have any need for a barbershop.

When she started losing her hair, she decided to shave it off completely, inspired by people like model Amber Rose. However, she finds higher expectations are placed on her “performance” of femininity compared to cisgender women like Rose.

Fountain finds she also faces a greater pressure to own her masculine hairstyle.

“When my hair grows out, I become incredibly uncomfortable, because if I’m going to have this short hair and wear it correctly, it has to look good,” she said. “It’s not that when I look at men, if their hair’s a bit longer, I [think], ‘You’re not masculine.’ I would never think that. But for me, because I am not male identified in any way, I feel like I have got to do it right.”

Lavannya Pulluveetil Barrera, a Brighton Park resident, faces the other edge of that  sword. While her mid-length hair and more traditionally feminine presentation does not necessarily defy societal expectations, she deals with backlash within the queer community.

“My queer card has been questioned a lot,” Pulluveetil Barrera said. “I really like keeping my hair somewhat long, [but] oftentimes I feel like there’s this perception that if you don’t have a buzzcut or a pixie cut, it’s not a clear marker of your queerness. That’s definitely been frustrating because I feel like me having somewhat long hair now contributes to the erasure of my queerness.”

Pulluveetil Barrera said she has had a mixed bag of reactions in queer spaces, from some people not believing she was queer to others taking on a challenge to “turn her” fully gay.

Pulluveetil Barrera also struggled with the intersection of her hair and her sexuality growing up as half-Indian and half-Mexican. Both sides of her family valued long hair in women, prompting her to grow out her hair as a child and develop a negative relationship with it. When she recently visited her family in India for the first time since cutting her hair, she was met with a lot of disappointment.

To have the queer community be almost as judgmental of her hairstyle as her family prompted Pulluveetil Barrera to hope that queer spaces can open their arms wider.

“If someone is in a queer space, regardless of whether or not they openly say they’re queer, just accept people for what they present to you,” she said.

For Hickey, being able to accept others is a secondary solution. She thinks the real work starts within.

“A lot of investment is put into advertising that [is] saying; ‘Accept everyone as they are. But we should focus more on, ‘Accept you as you are, and it shouldn’t matter what people think,’” she said. “It is about self-acceptance. Look in mirrors more. Take more pictures of yourself. Write about how you feel, and maybe you’ll be able to accept parts of yourself you didn’t like before, such as your hair. Or my hair.”