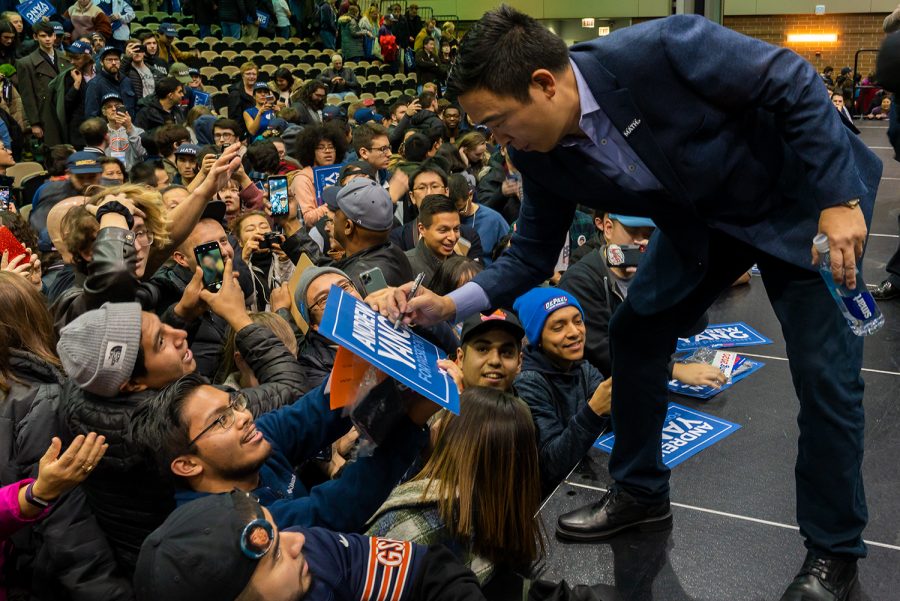 Over 1,000 people attended Yang’s rally Thursday, Dec. 5, packing the Isadore and Sadie Dorin Forum at the University of Illinois at Chicago, 725 W. Roosevelt Road. Many of them shouted “Yang Gang” and wore merchandise featuring the candidate’s slogan “MATH,” or “Making America Think Harder.”

A technology entrepreneur and founder of the nonprofit organization Venture for America, Yang did not gain much traction until he appeared on the Joe Rogan Experience Podcast in early 2019 and introduced his campaign platform on the Democratic debate stage in June.

According to recent surveys conducted by POLITICO and The New York Times, Yang has been consistently polling at approximately 3% among voters, which is about 22% lower than Biden, the current frontrunner. As of press time, Yang has also not qualified for the December debate threshold.

“We know who got us to this point,” Yang said at the rally. “It was not the media companies. It was not the folks in D.C. who are planning years in advance. It was us, it was you, it was the people of this country.”

Gilo Pereda, a 32-year-old information technology worker at a manufacturing plant in Sharon, Wisconsin, said he likes Yang’s human-centric policies and believes that Yang is fully capable of beating President Donald Trump in the 2020 election.

“I would say he has the best chance because he’s the antithesis of Trump,” Pereda said. “The Republicans picked Trump because he was out of the box, [a] businessman, different. Yang is that same avenue, but in my opinion, the right way to go.”

Senior integrated health studies major at UIC Abby Guillaume, an avid Bernie Sanders supporter, said she was skeptical about the sustainability of Yang’s policy proposing a universal basic income, which he calls the “Freedom Dividend.”

Yang’s plan would guarantee every American citizen over 18 a $1,000 monthly payment from the government, regardless of their socioeconomic status or plans to spend the money.

“You put the money in our hands, the money circulates over and over again through the economy. It makes us stronger, healthier, increases GDP by growing the economy,” Yang said in a press gaggle following the event. “It also saves us billions on things like incarceration, homelessness services, emergency room health care and other things that we’re spending hundreds of millions on.”

While the “Freedom Dividend” has drawn criticism for its anticipated total gross cost of around $2.8 trillion annually, Yang said the government would be able to pay this by implementing a 10% value-added tax on businesses’ goods and services and consolidating welfare programs.

During his speech, Yang addressed the country’s growingly “inhumane” and “punitive” economic problems such as the closure of small businesses and retail outlets and Amazon not paying federal taxes.

Veronica Pineda, a 21-year-old data analyst at United Airlines, said she has been a supporter of Yang and his policies for months but was hesitant to get involved at first. She said she plans to join efforts to ensure Yang has enough signatures to get on the ballot in Illinois.

Patricia O’Keefe, a 53-year-old independent consultant from Lakeview, Illinois, who has not supported or donated to a political candidate before, said she likes Yang because he is genuine, visionary, and “backs things up with facts.”

“I feel like if somebody came up to him with a great idea, he would listen, ponder it, get the facts and he wouldn’t rule it out just because it may not be what the party wants,” O’Keefe said. “I love that he’s not a party political hack. He’s not an establishment-anything.”