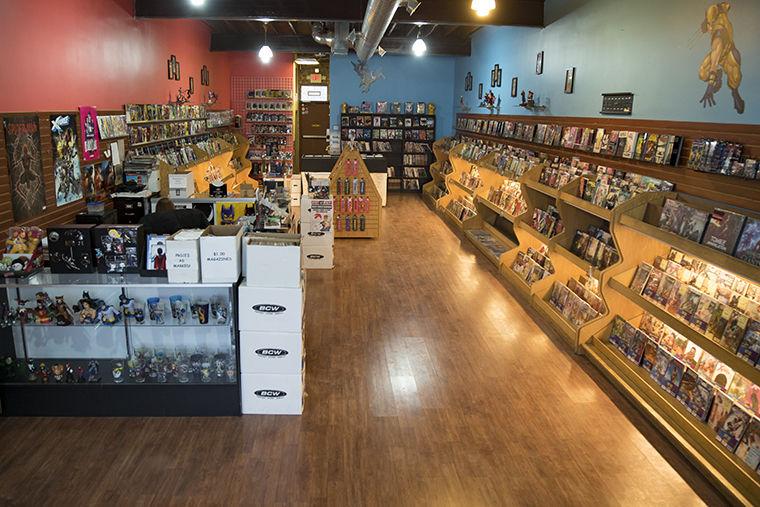 Chimera's Comics, 4915 W. 95th Street in Oak Lawn, will be given to the winner of an essay contest.

Like Clark Kent the reporter or Bruce Wayne the entrepreneur, Carmelo Chimera lives a double life. Chimera is an attorney at McGuireWoods LLP, but when he is not in the courtroom, Chimera is writing graphic novels or operating both locations of his comic book store, Chimera’s Comics—4915 W. 95th Street in Oak Lawn and 19 S. La Grange Road, La Grange.

He plans to give away his store Oak Lawn store to the winner of an essay contest he devised. Whoever can best answer “What makes a great local comic shop?” in a 500-word essay will be given the keys to the store. But the man underneath the suit may be as interesting as the contest.

THE CHRONICLE: How did you become a lawyer and a comic book store owner?

CHIMERA: I worked at a comic book store in high school and grew up around the stuff, thanks to my dad and my cousin getting me into it when I was younger. I had just started law school when a friend told me that our old comic book store had fallen on hard times. He asked me if I was interested in opening our own store, and I am the sort of guy who doesn’t like to say no to an opportunity unless I have looked into it. We opened up in my first year of law school. As my law career continued, the comic book store was a creative outlet. It gave me a platform to start writing and publishing, which was always my ultimate goal, so those things were always intertwined for me.

Can you defend criminals by day and be a superhero by night?

The thing about superheroes and criminal defense [attorneys] is you can look at it one of two ways: We are either punishing the bad people, or we are standing up for the innocent people.

Why are you giving away your store?

It is really because of the publishing efforts. My production is behind schedule by a month or two, and I am seeing more success there. There’s more people who want our stories—they’re all over the world—and I am not doing a good job keeping up with it.

At the same time, I’m doing my comic book store and my customers a disservice. There’s a pretty clear correlation between how well the store performs [with] how involved I am. When I’m there, I am putting on events, finding reasons to bring people into the shop and staying up on all the different vendors that we could be getting new merchandise from.

I could have sold it, I could have closed it, I could have consolidated the two stores into one store, but all of that seemed very cold and kind of depressing. When I had the idea to give it away, it was an idea that I could get excited about and an idea I thought could inspire people.

I want to see [our store] thrive. I want to see it become a beehive of activity in terms of bringing people in, increasing readership and inclusion and fostering creativity.

As far as restrictions go, there are none. It didn’t occur to me until just now that someone might try to turn it into something smutty or something like that. I am trying to weed out who is really interested and passionate about the work. The beautiful thing about comic book stores is they all can be, and should be, different. If you’re a gamer, your store can have more gaming, if you’re a toy collector, like I am, your store can have more toys. I want to encourage them to find their voice as a store. There are no strings attached here; if they want to rebrand or change the name, that’s up to them.

What if this person wants to sell the store?

Seven hundred and twenty people applied, and if I have the bad luck of picking the one person who doesn’t have the wherewithal and wants to get out of it … within the first two or three months, I don’t think that’s fair to the other 719 people. I think it’s up to me to do something about that.

At the end of the day, this is a gift, and I can give it away however I see fit.

What is the most interesting essay you have read so far?

The [essays] that are speaking to me are the ones that are very personal. There are people who are at the right stage in life to take a risk, either because they understand the risks involved with a small business, or they are passionate, but they are being beaten down by the grind of the day, and they have seen this as a chance to get out. That is tremendously powerful because I understand what it’s like to be so caught up with living your day-to-day life that you don’t really live.

When should we expect an announcement of a winner?

I expect to choose a winner over the weekend (by March 10). I will call this person first to talk it over with them. I am going to try to talk them out of it because if they are scared away, then it is not for them. But if they are for it, I’ll announce the winner and introduce them publicly. I want to have the transition done by the end of March, but that is probably not realistic.