Would you vote for a man who wears a boot on his head? 0.1% of New Hampshire did 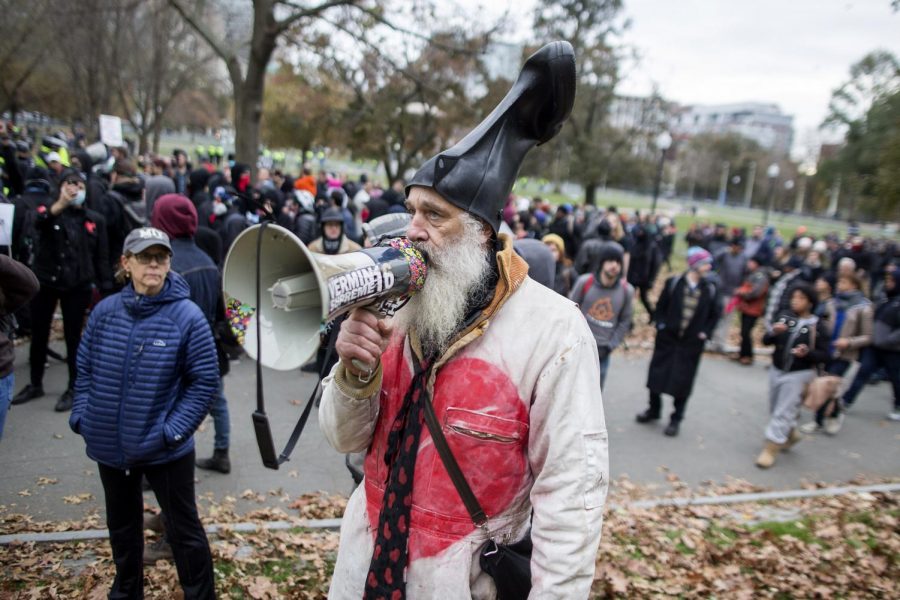 Vermin Supreme has been campaigning for the presidency with the Libertarian Party since 2012. He is known for wearing a rubber boot on his head and his free pony policy.

Wearing his signature rubber boot on his head, Supreme, a self-described satirist, counted to three and began singing about riding and grooming a pony, much to the amusement of the crowd.

“I would certainly love to give 16-year-olds the right to vote because then I would be president,” said Supreme, a libertarian, referring to his free-pony-for-all policy.

Supreme was one of 18 presidential candidates who attended the 2020 Open Presidential Debate at Hilton Chicago Hotel, 720 S. Michigan Ave., Wednesday, March 4. The event featured candidates primarily from third parties, such as the Green and Libertarian parties.

Supreme has been campaigning for the presidency since 2012, with his biggest success being capturing 0.1% of the vote in the Feb. 11 New Hampshire Democratic primary where he earned 260 votes as a write-in candidate, according to the New York Times.

“It’s important that there are parties outside of the two major parties that give some vibrancy to process and provide people with an alternative,” said Chris Lesiak, a political blog writer who attended the debate.

Attorney Callie Hearn, who supports Sen. Bernie Sanders (I-Vt.), did not come to the event looking for an alternative candidate. Rather, she said she was interested in seeing what other presidential candidates had to say given the “widespread dissatisfaction” among many Americans with the two-party system.

In 2018, two-thirds of Americans said they felt there should be a third party in the United States, according to Voter Study Group, a Washington D.C.-based collaboration of more than 20 analysts and scholars.

Two major hurdles third-party candidates face are the lack of a strong infrastructure with a network of people and resources to support them, as well as having access to the ballot in all 50 states.

Supreme, a Massachusetts native, got involved in politics in high school when police harassed his classmates for smoking marijuana, which enraged him. Since the 80s, he has been running a satirical campaign for different offices, wearing a boot as a hat and carrying a three-foot toothbrush. He also ran unsuccessfully for mayor of Baltimore in 1987.

Despite the chronic struggles, some third-party presidential candidates, such as Sedinam Moyowasifza-Curry, are not discouraged.

Moyowasifza-Curry, a Green Party candidate and Los Angeles native, said third parties simply need more exposure and that because many Americans do not vote for either major party during general elections, there is hope for third-party success.

In the last presidential election, 61.4% of eligible Americans voted, according to the U.S. Census Bureau.

“The two corporate parties the media is pushing have not inspired people to vote,” Moyowasifza-Curry said. “The only reason we’re able to keep getting traction is that people are tired, she said. “You just have to have the right candidate and I’m that one.”