While waiting for a COVID-19 vaccine, old traumas with the health care system resurface in the Black community 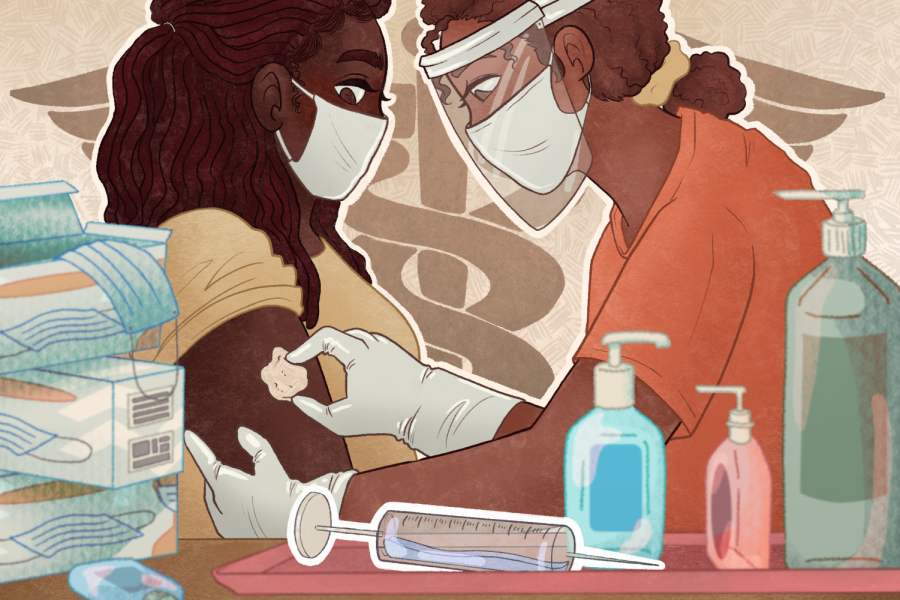 In 2006, Patricia Render thought her sick daughter, Lacie, was in good hands when her aunt took the child to the emergency room.

However, the Champaign County resident said she was horrified to learn her daughter—who was in middle school at the time—had an allergic reaction to the sulfur-based medicine she was prescribed and that the doctor treating her was no longer licensed due to malpractice in a neighboring town. Fortunately, Lacie, now 26, recovered.

Render’s story is not unique. According to a poll by the Kaiser Family Foundation and The Undefeated, some in the Black community are skeptical of medical care due to ongoing negligence and deliberate mistreatment at the hands of doctors and the health care system in general.

This skepticism is especially apparent as the country nears the release of a COVID-19 vaccine, which is anticipated to be ready as soon as early or mid 2021, according to the World Health Organization.

According to a September 2020 Pew Research Center study, only 32% of Black Americans indicated they would get a COVID-19 vaccine when one became available, in comparison to 52% of white Americans.

Render, a former hospital worker who sanitized surgical tools, said she would not take a COVID-19 vaccine unless it was proven to be 100% effective because she believes a vaccine could possibly do more harm than good.

Despite once receiving a pneumonia vaccine, Render said she still contracted the infection three times afterward.

Render said because there is a history of discrimination against Black people in health care, she does not believe a vaccine will be intended to help her as a Black woman.

In Harriet A. Washington’s book, “Medical Apartheid: The Dark History of Medical Experimentation on Black Americans from Colonial Times to the Present,” she states the relationship between Black Americans and the medical establishment has been historically antagonistic.

From enslaved people being punished with beatings as a “cure” for their illnesses, to using sterile enslaved women as live test subjects, Black people have been mistreated by medical professionals countless times.

For some members of the Black community, contracting COVID-19 only affirmed their lack of faith in doctors’ responses to Black pain.

Brittany Hogan, a 32-year-old filmmaker and a member of Mezcla Media, a collective of more than 500 women and non-binary filmmakers of color in Chicago, said when she contracted COVID-19 in April, her doctor dismissed her systems as pneumonia and sent her home.

“It started with body aches and extreme fatigue. Then, it was chills and I had a fever and shortness of breath,” Hogan said. “I contacted someone from my doctor’s office and told them the symptoms. When I mentioned that my mom had pneumonia a few weeks prior, they automatically assumed it was pneumonia.”

Hogan said she was prescribed medicine for pneumonia, which only made her feel worse, and eventually wound up in the emergency room as her symptoms increased and she needed an oxygen mask. However, this only presented more challenges for Hogan.

“The doctor was like, ‘You have COVID, there’s nothing we can do,'” Hogan said. “In so many words he basically told me I wasn’t sick enough to stay in the hospital or receive treatment.”

Hogan said she felt neglected and had to demand treatment when her throat closed to the point where she could not swallow a pill.

Because of her experience, Hogan said she will not volunteer for a vaccine when it is available because she fears being tricked into a secret experiment and believes large pharmacy companies only want to make money.

Throughout history, Black people have been used for scientific and medical research to their own detriment.

Enslaved people were not given the rights and agency of American citizens despite many being born here, said Melanie Chambliss, assistant professor in the Humanities, History and Social Sciences Department.

Chambliss said prior to the 14th Amendment, ratified in 1868, there were no explicit requirements that Black people were to be counted as citizens. Without defined citizenship, enslaved African Americans did not have the right to informed consent, which entitles people to be given accurate information about the procedures performed on their bodies.

In the 1800s, Dr. James Marion Mims, often called the father of modern gynecology, operated on Black women’s reproductive systems without anesthetics because he believed they did not feel pain, according to Disability Studies Quarterly.

Similar mistreatment continued into the 20th century. In 1951, doctors took a biopsy of cancerous cells from Henrietta Lacks, a Black woman, without her consent.

Although her cells were successfully used to create a polio vaccine and study the effects of toxins, drugs, hormones and viruses, Lacks died soon after of cervical cancer. Following this, her family did not receive compensation or proper information about how Lacks’ cells had been used.

The U.S. Public Health Service Study at Tuskegee, which lasted from 1932 to 1972, involved hundreds of Black men who had syphilis, according to the Centers for Disease Control and Prevention. The participants were tricked into believing they were receiving free medical care, but were actually just observed for a study of untreated syphilis. The men were not given penicillin once it became a viable cure, and dozens died as a result.

Kim Dulaney, the director of Education and Programs at DuSable Museum of African American History, said this history lingers in health care workers’ present attitude toward Black patients because the medical system was not created with Black patients in mind.

“[There is] this whole idea that Black bodies are less valuable, so therefore are more readily accepted as this test pool,” Dulaney said. “We have to look at the proceedings of people treating people of African descendants like slaves—that undergirds the initial fear.”

These examples of malpractice are far from forgotten by the Black community, according to Ansell’s experience with Black patients who are apprehensive about vaccines for COVID-19 or the annual flu shot. Ansell said some of his patients fear that receiving the vaccine will give them an active virus.

As people are directed to stay at home and social distance, staying in small living quarters with multiple generations of a family can make the virus nearly unavoidable for some in the Black community, as reported Oct. 7 by The New York Times.

Ansell said COVID-19 is seated in pre-existing social fault lines and there is still lingering fear about the health care system.

“Folks are mistrustful of vaccines for many reasons: general mistrust of healthcare, mistrust of government [and a] lack of understanding of how a vaccine works,” Ansell said.