What to know when protesting; experts weigh in on the momentum of the movement 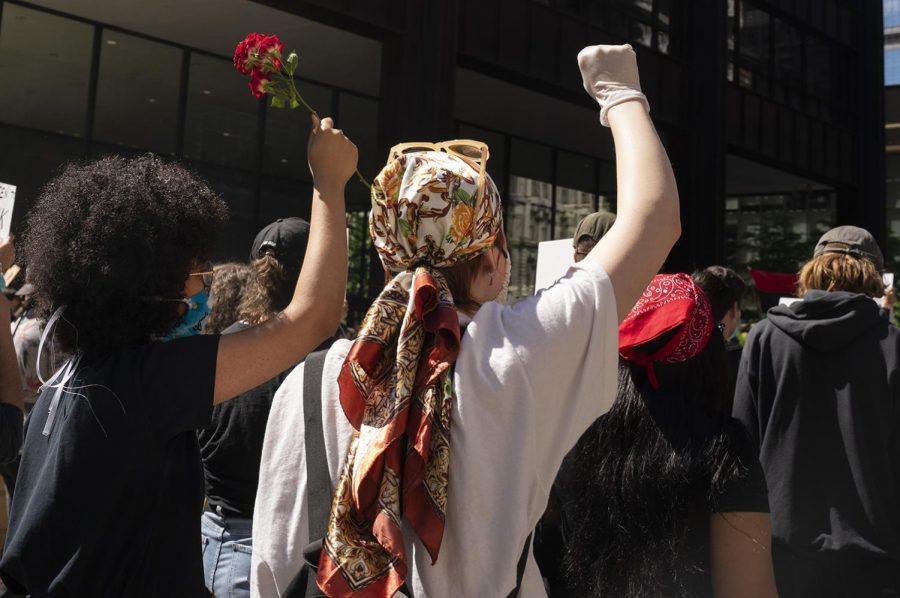 In 2018, the Illinois Chapter of the Black Panther Party celebrated its 50th anniversary, and⁠ the revolutionary socialist political organization had its own Bill of Rights, where No. 7 on their 10 point platform discussed the elimination of police brutality by any means necessary.

“Then and now, people were engaged and protested in the streets,” said Stan West, a journalist and adjunct faculty member in the Cinema and Television Arts and English and Creative Writing Departments, who has reported on protests and movements for more than five decades.

Protests are in full bloom across the country in support of the Black Lives Matter movement—sparked by the death of George Floyd at the hands of a Minneapolis police officer—but while they may relate to systemic issues seen in the U.S. for more than 400 years, protesters today are experiencing a new era of social justice movements.

Albert Williams, an associate professor of instruction in the Theatre Department, said the use of social media has changed the scope of protesting in many ways, including making involvement more accessible, but he said it makes people vulnerable to “hijackers” looking to disrupt or alter the movement.

Williams, who participated in various protests during the aftermath of the Stonewall riots in 1969, said protesters must be vigilant and careful with whom they interact.

The Stonewall riots escalated quickly and were unorganized, resulting from an “explosion of anger” after police raided The Stonewall Inn, Williams said, which was a private gay bar in Greenwich Village in New York City. After the initial raid, members of the LGBTQ+ community participated in spontaneous demonstrations, which led to the first Pride celebration in 1970.

“The Stonewall riots is a really good example of a protest that initially wasn’t beneficial in and of itself,” Williams said. “It was a riot.”

However, he said the aftermath of the riots was beneficial because it got people talking and strategically planning and organizing protests to create a powerful impact and change.

“Plan it out and know what streets you can walk on or which streets you can’t walk on,” Williams said. “You know what’s lawful and what’s not lawful … you take it to the edge.”

West said protests are meant to create social change, which is already evident as federal and state policies and laws are being challenged, including reprioritizing police funds.

Janet Pena-Davis, an adjunct faculty member in the Cinema and Television Arts Department, said movements always start with young people and compared to the past, she feels there are more open conversations and camaraderie.

Pena-Davis, whose brother was a member of the Black Panther Party, said protests have always been “important and crucial” and are needed now more than ever to ensure people are fully aware of what is going on.

“As a society of black, brown, indigeneous [and] LGBTQ [people], we have a united voice, and now I see that voice is literally singing the same song,” Pena-Davis said.

Under the First Amendment, journalists, protesters and police officers—and all Americans—have the right to five specific constitutional rights, including the freedom to gather and petition for change and freedom of speech and of the press.

Patricia Gallagher Newberry, the president of the Society of Professional Journalists, said everyone is experiencing a precarious and important time in history, and there are big issues being sorted out daily.

Newberry said it is important for those participating in protests to know that generally what they are doing is seeking public attention to be seen and heard. In the case of protests, journalists’ job is to seek the truth and tell the story.

Newberry said journalists have always operated under an “implicit contract,” which means if someone is in a public venue, on public property and exercising the right to speech, petition or gather, then the journalist has the right to document it.

When protesting, the Poynter Institute’s Senior Faculty Member Al Tompkins said it is important people understand the difference between a peaceful protest and civil disobedience, as intentionally breaking the law by crossing police barriers or staying out past curfew is civil disobedience and can result in getting arrested.

The Chicago Police Department did not respond to the Chronicle’s request to provide further information on what protesters can do that is within the law and when they feel it is appropriate to make an arrest.

With the right to free speech, all protesters have the right to demonstrate through traditional public forums in public spaces like sidewalks, streets and parks, said Steven Schwinn, professor of law at the University of Illinois at Chicago John Marshall Law School. But the government has the right to impose “reasonable regulations” such as the requirement of permits or not allowing loud sound devices like megaphones, he said.

Schwinn said protesters are also protected under the Fourth Amendment, which prohibits unreasonable search and seizures. He said protesters have the right not to be abused by police, and any police officer must have some degree of probable cause in order to question or arrest someone.

Schwinn said if protesters believe police officers are wrongfully searching them, seizing property or attempting to arrest them, they have the power to state their rights and walk away.

In light of protests across the country, journalists have been scrutinized, as there is often a misunderstanding of their roles in mass movements.

Tompkins said a journalist’s job is not to make people look good or bad, it is to capture what is going on. This includes not “hiding” anyone’s identity or vilifying anyone.

Newberry said she understands why protesters are concerned about being visible in photographs taken during protests, but said the only way to avoid it is to not attend, because it is a journalist’s right to photograph people in public spaces.

Newberry suggested protesters stop and engage with journalists and have an open conversation, but said journalists ultimately have the power in deciding to use a certain photograph or information obtained in a public place.

Tompkins said it is unreasonable to be in a public demonstration and ask to not be documented, which he said applies to everyone including protesters and police officers.

Aside from cell phone photos or videos and the use of social media, journalists are the key players in documenting history.

Newberry said continuous conversations surrounding these issues or topics are essential in every new monumental action or event that occurs, as there is always a new “flood of people” joining in, making it a continual learning process.

Beyond pushback from protesters and others following the movement, there have been nearly 400 attacks on journalists by police officers since Memorial Day weekend, according to Newberry. She said journalists should not be targeted because they are not the cause of anything going on, rather they are the storytellers and “the story cannot be told if they are harmed.”