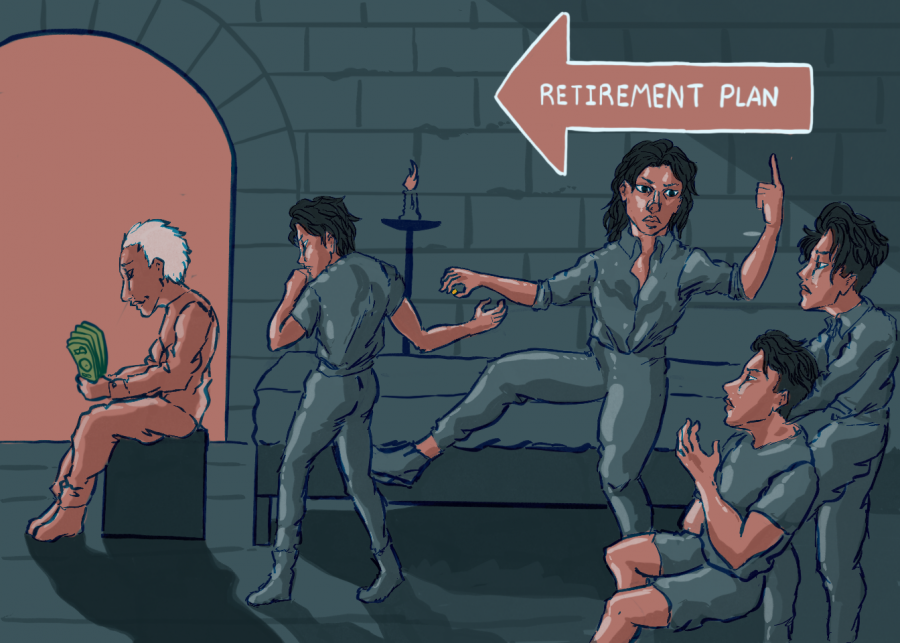 As student loans pile up alongside the cost of rent and groceries, a retirement fund may be the last thing on a college student’s mind. But planning ahead and setting up a fund may pay off in the long run.

“I wish I had started in my 20s … but I didn’t have the concept of saving and building money,” said Najm Haq, a 2019 MFA creative writing alum. “I didn’t really think about this more seriously [while I was growing up]. So I think the sooner people start looking at their assets versus liabilities, the better.”

Individual Retirement Accounts allow people to invest money toward their retirement fund and receive tax benefits. There are two types of IRA, the traditional IRA and the Roth IRA.

For a Roth IRA, the person investing pays income taxes normally and does not have to pay taxes on the profit made by a Roth IRA when they retire.

According to a 2017 study by Nationwide Mutual Insurance Company, the average age workers start to save up for retirement is 31. Haq, the CEO and founder of Naj Fu Studios, a creative consulting company, began investing at 32 and said he was “late to the game.”

“[Saving for retirement] is really hard to do as an undergrad; the call of college for a lot of people is the idea of building your personality, your creativity, building who you are, which is 100% necessary,” Haq said. “But there is also a large cultural window we are given, a privileged window we were given [that] gets lost in that.”

To open an IRA account, one must find a broker, a middle man between you and your investment, said Phillip Braun, a clinical professor of finance at Northwestern University.

For a traditional IRA Braun said he recommends investing in mutual funds or exchange-traded funds with a large company because they are typically cheaper.

Both mutual and exchange-traded funds are a collection of investments similar to stocks that are related to each other. For example, if you purchase both Tesla and General Motors stocks, it would be an automobile funds bundle. The exchange-trade fund depends on the value of each individual investment inside the bundle. A mutual fund depends on the value of a whole bundle.

According to Aspiration, an online personal finance company, the person opening an IRA account needs to make sure they can spare some money and understand that they likely will not see the money they invest for decades.

After submitting personal information and identification to an online broker, they will invest your money into different stocks and funds, which will generate compound interest every year in the IRA account. People can invest up to $6,000 a year of earned income to an IRA with interest rates starting from 7% to 10% a year.

By using an online IRA calculator, one can estimate how much money an IRA account can make. For example, if a person starts contributing just $50 a month at age 20, by 65 you will have approximately $180,000 instead of $27,000. As an individual begins getting higher-paying jobs and is able to contribute more and more per month, the amount of savings will increase.

Both the traditional IRA and Roth IRA are investment accounts, but they are different from a bank account in the way they are designed, so that the account holder only takes out money once they hit the retirement age of 59 1/2. Taking money out of the account will typically result in a 10% tax penalty. You can borrow money from the fund for 60 days without a penalty.

Another type of retirement account that is employer-based is known as a 401(k), but not all employers provide it. With a 401(k), an employer may match an employee’s contributions to their retirement fund up to a fixed amount, and the money is not taxed until after retirement.

Robert Riedl, president and CEO of Endowment Wealth Management, said a common problem is when people change workplaces and do not transfer their 401(k) from a previous employer into the new employer’s 401(k) account.

Fernando Diaz, a 2004 journalism alum and co-founder of Chicago Standard—a consulting firm for news publishers, has two regular IRA accounts and one 401(k) from a past employer. Diaz started saving for retirement at age 24 in 2004, shortly after graduation.

“Ideally, I would love to have one IRA that I can make contributions to and that the interest compounds, but it is one of those things that’s ninth on the list of priorities,” Diaz said. “I know I should do it, but I haven’t.”

Before worrying about retirement, Braun said, students should prioritize paying off student loans.

“You want to start saving for retirement as soon as you can because you’ll get to compound interest on your savings,” Braun said. “If you have a 401(k) plan, put enough [of a] minimum amount [so] that you receive all of an employer’s matching funds. … If you don’t have an employer [retirement plan], then save [some money] into an IRA every year.”

Amina Gilbert, a freshman theatre directing major, is currently unemployed but has had a handful of jobs from retail, to tutoring, to work at a summer camp. Gilbert said she does not know much about retirement accounts but plans to open one in the future.

“It’s intimidating,” Gilbert said. “I know the importance of being financially literate, and I’m holding on to my childhood by not having to learn about [retirement plans], and I don’t want to sign up for something that I don’t know all the details about.”

According to the American College of Financial Services, almost 67% of Americans don’t have a retirement plan.

A November 2020 SimplyWise survey showed that 74% of people plan to continue working even after they claim Social Security benefits.

“A college student should do everything they can to eliminate their student debt first and foremost,” Diaz said. “If they do not have an employer-provided retirement plan, talking to a tax adviser about setting something up is a good idea. … Begin to establish this idea of saving for the future.”