What the Chronicle is watching 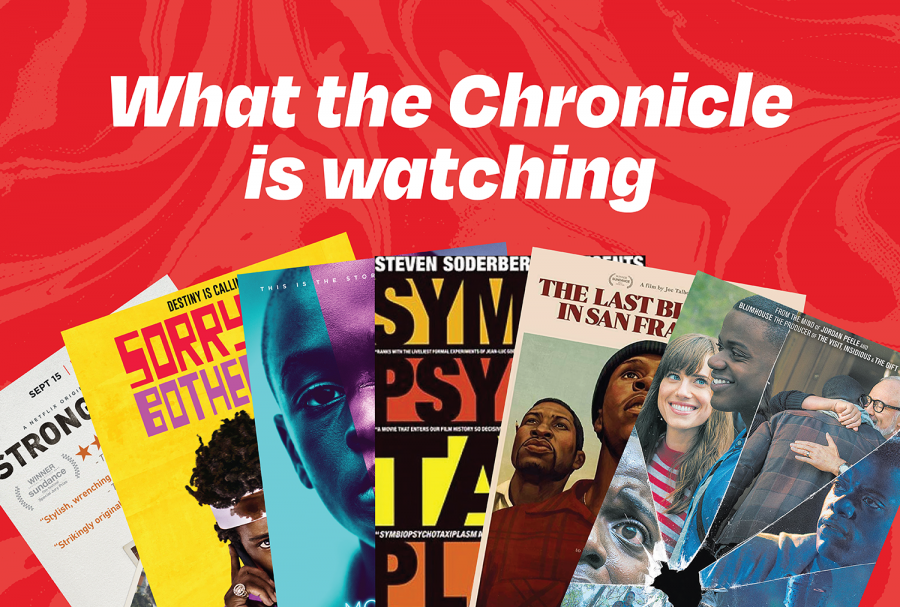 While every art form is uniquely capable of shaping our worldview, film in particular stands alone in the way it manipulates how one perceives time.

Film immerses us in someone else’s experience—sometimes from polar opposite circumstances—forcing us to feel with our heart instead of our head.

To continue boosting the work of Black creators, the Chronicle highlights films related to the Black experience—whether they have been spearheaded by Black filmmakers, star Black actors and actresses or shine a light on what it means to be Black.

“Get Out,” directed by Jordan Peele. Picked by Kendall Polidori, co-editor-in-chief.

Synopsis: After dating for a while, a Black man named Chris and his white girlfriend, Rose, reach the point in their relationship where they meet each other’s families. To start this new milestone, Chris accompanies Rose on a weekend trip to visit her parents. As their time there continues, Chris makes terrifying discoveries about the family and is put into a situation he could have never imagined.

What makes this film an important viewing?: It is different from other horror films, with racial anxiety at its core. In an interview with NPR in 2017, Peele said he “wanted the audience, regardless of race, to see the subtle racism through Chris’ eyes.” The movie places you in the position of Chris, forcing you to feel his emotions toward the reality of his biracial relationship.

How has this film shifted your perspective?: There is a twist toward the end of the movie, which opened my eyes to the fact that you never know who you can trust. There are truly ugly and vile things in the world, but if we are not aware of certain situations, then we may never notice that people actually endure those experiences.

Synopsis: A gay Black man named Chiron, or “Little,” navigates life in Miami, Florida, amid bullies, drug addictions, struggles with his sexuality and death. Chiron’s journey to self-discovery is complicated by the presence of romance and stereotypes he has grown up with that dictate his identity.

What makes this film an important viewing?: You can probably count on one hand the number of mainstream films about gay Black men. It is not only important in terms of representation, but for bringing something so important and unique to the table for LGBTQ+ film. It paints a realistic and poignant, yet delicate picture of life for gay Black men, showing the intersection of race and sexuality.

How has this film shifted your perspective?: It helped me realize that there are so many different narratives and lives that LGBTQ+ people lead. We don’t all fit into this one box full of mannerisms and appearances, and I was grateful for a story that reached further than the basics of sex, coming out or one’s identity.

Synopsis: Cassius Green, a Black man, starts a new job as a telemarketer at RegalView, a mysterious company that sells services to people, and at first he isn’t the best. An older co-worker, who is also Black, suggests Green use his “white voice.” From this point on, Green’s career at RegalView starts to flourish, and he is promoted to “Power Caller.” This is when he begins to learn the truth behind RegalView and what it actually sells.

What makes this film an important viewing?: Though the film is satirical, after watching, I noticed the stereotypes often used to depict Black people. This film calls out people who say, “You speak really well for a Black person” or “You don’t sound Black”—as if people of different races have a designated way of speaking.

How has this film shifted your perspective?: It gives examples of microaggressions—“indirect, subtle or unintentional discrimination against members of a marginalized group.” It implies that for Black people to be listened to, they must be “well-spoken” according to white people.

Synopsis: This is a personal documentary about the death of the director’s brother and takes a close look at the 1992 murder of William Ford Jr., a 24-year-old Black man, by a 19-year-old white auto body shop employee. It emphasizes the racist implications of allowing the murderer to go free, as an all-white jury declined to indict him. The white man claimed self-defense, although he had a gun and shot from a distance, while Ford was without a weapon.

What makes this film an important viewing?: It is an account of institutionalized racism and how often Black people, even when they are the victim, are made the criminal.

How has this film shifted your perspective?: It’s clear that the U.S. is in a similar position to where it was in 1992. White people run free for murder, while Black people are tried and sentenced to death in the streets without a proper courtroom trial.

Synopsis: Greaves, a legendary documentary filmmaker and trailblazing Black director, was put off by phony film acting and decided one day to create a film that comes as close to reality as possible. In a completely original, slightly maddening way, Greaves blows the door wide open on what a documentary can be: Actors play out a breakup scene over and over, filmed by a crew who has no idea what type of movie they’re creating. At the same time, another crew films the first crew, all in search of what feels “real.”

What makes this film an important viewing?: Most filmmakers don’t care about reality—movies are, after all, produced and sold. Greaves disagreed, believing filmmaking was the closest we could come to documenting true reality. This movie expanded what I believed documentaries are capable of, and for that reason, I believe everybody moderately interested in film should view it.

How has this film shifted your perspective?: This film really made me come uncomfortably close to understanding how falsified some documentaries are. We’re so used to believing documentaries represent reality, but this isn’t necessarily the case. Greaves pushes that we must question everything we see and the narrative it is intended to fit into.

Synopsis: This film follows best friends Jimmie and Mont as they struggle to reclaim the “Old House” built by Jimmie’s grandfather, which now sits in a “re-valued” area of San Francisco. As Jimmie struggles to rebuild what his family lost with the help of Mont, he embarks on a journey that tests their friendship and idealization in the past, revealing the difficult truths behind the family myths that often shape identity.

What makes this film important viewing?: Based on the first-hand accounts of Talbot’s best friend, who plays the lead role of Jimmie in the film, this movie is a blatant middle finger to gentrification, honestly presenting the heartbreaking nature of being pushed out of a place you call home and the multi-generational wounds it can inflict.

How has this film shifted your perspective?: Before I watched this movie, I had been exposed to the concept of gentrification, but it was a concept I only understood in abstract terms. This film allowed me to understand the human impact that such changes have on those most directly affected and the way in which it can continue to affect individuals for years to come.