‘We were on a break’: The Friends Experience is bigger and better than ever 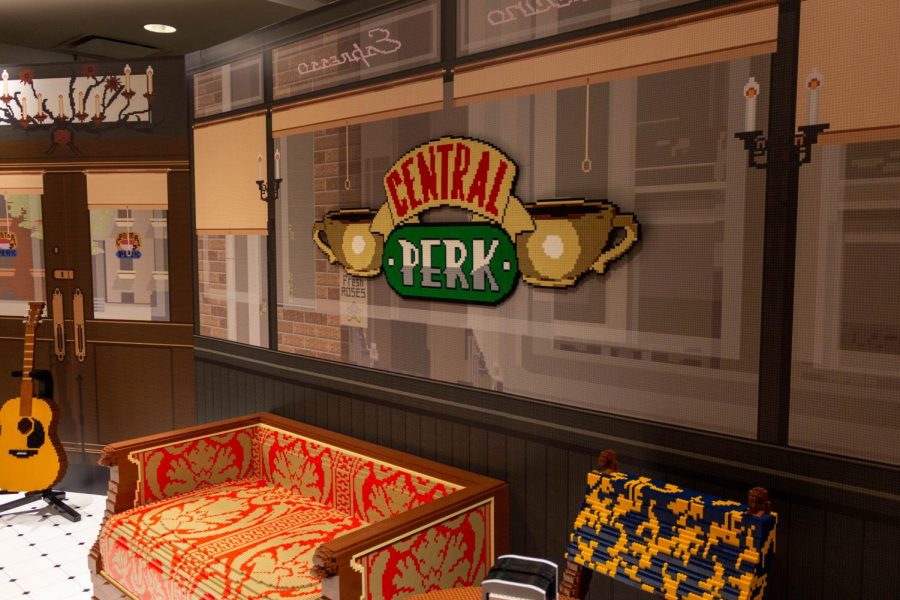 The first of the 12 rooms in the Friends Experience is a recreation of Central Perk, the frequent hangout spot in the show, completely made out of Legos.

As the iconic purple door with the gold frame is opened to display the orange, velvet couch surrounded by a grand fountain, “I’ll Be There for You” by the Rembrandts plays on a constant loop and saturates the space of the Friends Experience.

The immersive exhibit, 540 N. Michigan Ave., is filled with 12 rooms that fans of the sitcom “Friends” can enjoy this spring.

Recreations of sets range from Monica’s eclectic kitchen to Joey and Chandler’s living room. Props used in the show, such as Phoebe’s guitar, are on display and a gift shop is packed with merch like sweatshirts with the show’s logo and a Central Perk apron.

The exhibit, brought to Chicago by Superfly X, Warner Bros Consumer Products and Warner Bros Television Group, originally opened in Chicago in October 2020 but closed shortly after due to the pandemic.

“We opened during an unprecedented time,” said Anna Blake, director of brand marketing at Superfly X. “I was really proud of the team because we developed really strict health and safety standards.”

The idea of an exhibit inspired by “Friends” began during the 25th anniversary of the show in 2019 and was created to allow fans to experience the show for themselves.

“We did a small club pop-up in New York, where we had certain elements of the experience and it was so successful that we knew we wanted to do an even bigger, better version of it,” Blake said. “We always knew we wanted to come to Chicago, so it’s been a few years in the works.”

But due to the pandemic, the Friends Experience implemented “Monica Clean,” a way to keep visitors safe and tie the COVID-19 restrictions into the show. It was inspired by Monica’s character, who is known for her obsession with cleaning.

“We were able to use Monica and ‘Monica Clean’ as a way to make it a little less scary in the time that is a scary year,” Blake said. “It’s hand sanitizer and wipes readily available at every touchpoint, it’s our staff wiping down every surface, deep cleanings throughout the day … and requiring masks—making sure that we’re providing the safest environment for both our fans and our staff.”

Throughout the tour, guests are encouraged to take photos and immerse themselves in the sets packed with details from the show. Rachel’s 18-page letter to Ross is on display, and people can pose with the couch that Ross struggled to get up the staircase in season five.

Participants can also learn about what went into the creation of the Emmy Award-winning show through behind-the-scenes looks at the wardrobes, scripts and more.

The scripts on display, all signed by the cast, include the 100th episode and ‘The One Where Ross and Rachel Take a Break.’ There are also mannequins for every one of the main characters, adorned with outfits inspired by each person.

The detail and time that went into the creation of this exhibit shows how special it is, and Blake said being able to enter the “Friends” show by sitting in the reimagined sets is what makes this exhibit so amazing.

The Friends Experience opened to the public on March 17 and will run through May 31. Tickets are $35 and private access tickets are also available.