Volunteering in a pandemic: The importance of maintaining eco-consciousness in a time of unrest 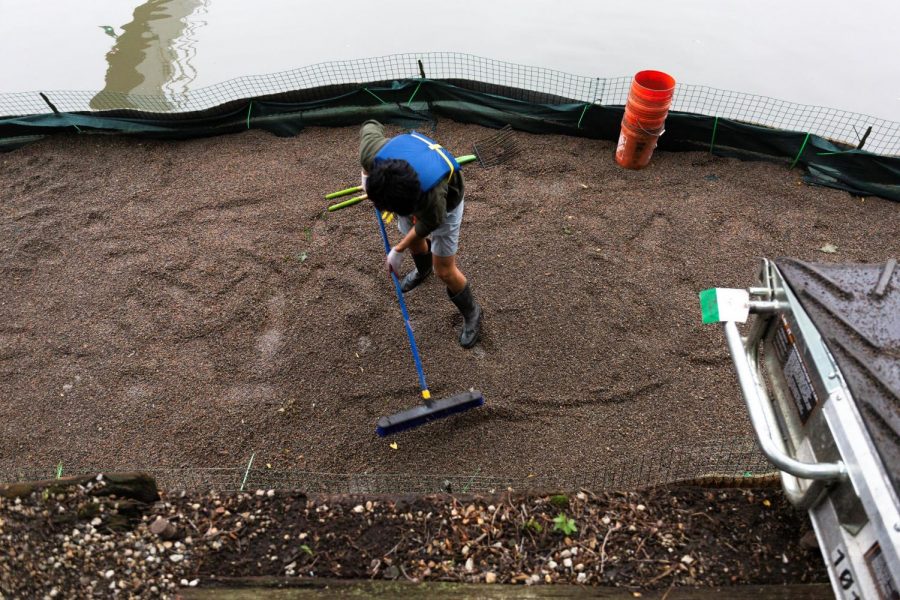 Bill Wei, consultant at Accenture, sweeps LECA, a lightweight soil made of clay pebbles, around the platform, covering the wetter areas with excess soil.

My feet have blisters, my shoes are wet and my black T-shirt is covered in sweat. My hair is falling out of my braids and my arms are caked in mud. I am exhausted, dirty and sticky, but I have not felt this satisfied in months.

With the coronavirus pandemic, eco-disasters and ongoing political unrest, it can sometimes feel hard to breathe. Helplessness and hopelessness are suffocating, and it is difficult to imagine there is anything we can do about it.

We can vote and wear masks, but it often does not feel like enough. I wanted to do more, so I set out to find a way to better my community, regardless of whether the change would be big or small. That is when I discovered Urban Rivers, 1412 N. Kingsbury St.

Founded in 2016 by Nick Wesley, Josh Yellin and Zachary Damato, Urban Rivers is a non-profit with the mission of transforming city rivers into urban sanctuaries. The company began by asking a single question: “Can something grow in the Chicago River?”

After research and experimentation proved the Chicago River could sustain both plant and animal life, Urban Rivers expanded its organization by following the framework set by the Wild Mile, a group of five different organizations with the shared goal of creating the first mile-long floating eco-park in the world.

The volunteers are led by Damato’s sister, Alexandra, and must be CPR certified. River Rangers are in charge of cleaning up trash, removing weeds and invasive species, monitoring plants and observing wildlife.

“Our volunteer program is all about gathering, hosting events and being out together,” Alexandra Damato said.

Urban Rivers reopened in July after being closed for multiple months due to the winter and ensuing pandemic. It began this season by installing a more buoyant floating garden and a small lily pond. This new garden is diagonal from the organization’s 2017 installation in the North Branch Canal of the Chicago River.

Despite a rough start to the season with just three staffers working on plant maintenance over the summer, Alexandra Damato said the pandemic has not impacted the number of volunteers or their consistency.

On Wednesday, Sept. 9, I was given the opportunity to volunteer with Damato and the Urban Rivers team, including Wesley, researcher Phil Nicodemus and several River Rangers.

Together we filled a new installation with LECA, a lightweight soil made of clay pebbles. We worked for roughly three hours, transporting buckets of LECA from the pile outside the company building to 10 feet below on the floating base.

It was a fun, tiring and slightly strenuous task that did not require much thought. It turned out to be exactly what I needed.

For the first time in months I felt awake and useful. I was creating physical change that I could see, and I was completing hands-on work with passionate people who shared a common goal.

I did not think about the election or the wildfires, and the only reminder of the pandemic was the piece of cloth on my face. I am not naive in thinking we can ignore these problems or that installing floating gardens will solve climate change, but if I can get a few hours a week where I am not overwhelmed with the weight of the world and drowning from anxiety, I will gladly take it.

In addition to the therapeutic release, Urban Rivers gave me the chance to clean up one part of the river and build a home for wildlife in another.

Urban Rivers is different from the other wildlife sanctuaries I have been to. Besides the innovative ways it is planting gardens, it stands out with its emphasis that restoring a missing ecosystem will always come first.

The large floating platforms are filled with native Chicago plants and home to muskrats, turtles, geese and beavers. They first appear as small, green marshlands, but upon further inspection, one can see the hidden pink flowers and puttering bumblebees.

Where some groups will build for appeal and tourism, Urban Rivers builds to rehabilitate an entire environment. The beauty is just a bonus.

Urban Rivers welcomes new volunteers to join during the next onboarding date on Thursday, Sept. 17, at 6 p.m. Sign up here.