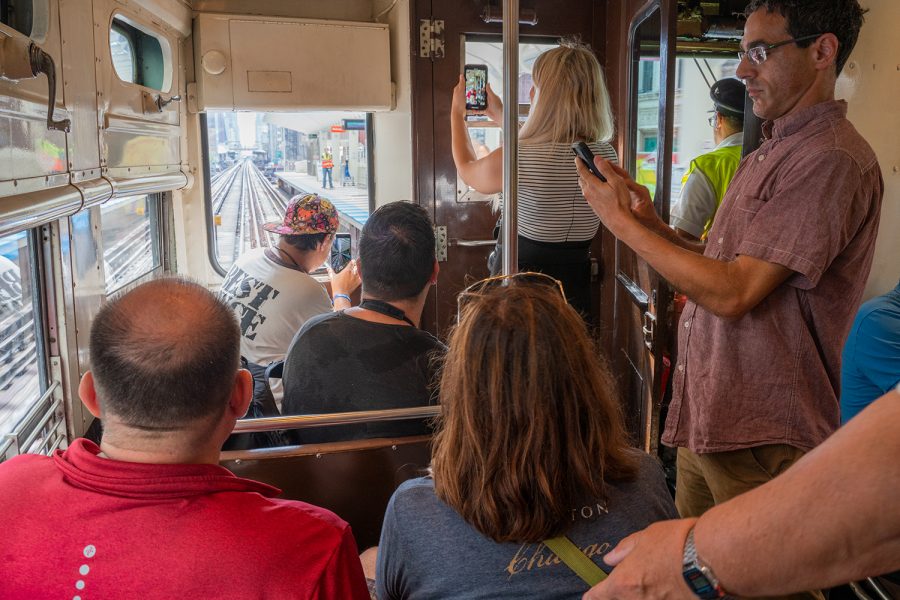 Riders capture a view of the Loop from the vintage train's front facing windows on the train Oct. 1.

Vintage 6000-series trains took passengers for a historic ride through the Loop in honor of Customer Appreciation Day, Oct. 1.

Built between 1950 and 1959, the vintage trains have not hosted the public since they were retired in 1992.

The event was run by members of the historic car crew, including current and retired Chicago Transit Authority employees.

For some, like Graham Garfield, coordinator for the Heritage Fleet Program and unofficial CTA historian, this was a nostalgic trip.

“For generations of Chicagoans, this is very much the quintessential ‘L’ car,” Garfield said.

The crew members also answered passengers’ questions about the train and provided commentary through a built-in speaker system during the ride.

The trains are part of the CTA’s Heritage Fleet Program, which maintains historic rail cars, buses and other equipment to preserve the past through outreach events such as this one.

Meant as a thank-you to CTA riders, the Customer Appreciation Day event commemorated the CTA’s 72nd anniversary as a working institution.

John Zupko, a rail instructor from the historic car crew, got involved with the program due to his past experience as a conductor for the CTA dating back to the late 1970s.

“Being here as long as I have, I have always been fascinated by the history of the CTA,” Zupko said. “I totally embraced it when we formed the heritage … part of the CTA to show our customers what it was like back in the early days to ride the trains.”