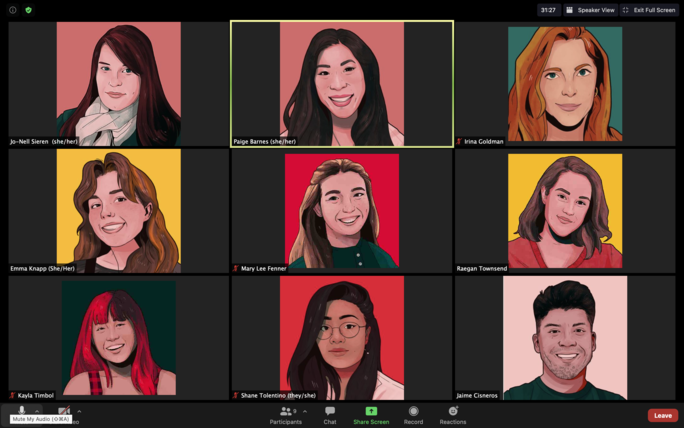 Did you know that Lincoln Park used to be a cemetery? According to “FRANK Ghost Adventures” from FRANK magazine, there are around 35,000 bodies currently buried under Lincoln Park.

“FRANK Ghost Adventures” is just one of many articles produced by the FRANK team in its latest issue. Students collaborated to cover international student struggles during the pandemic, a local coffee shop created by a graphic designer and a guide to caring for different houseplants, among other topics.

“The main purpose of the magazine to me is learning how to work with different artists in a collaborative environment,” said senior graphic design major and FRANK contributor Irina Goldman. “It truly was a team effort, and you get to express yourself in different ways and figure out how to work in that dynamic.”

FRANK was created in 2012 by Internship and Career Adviser Jo-Nell Sieren and Special Adviser for Community Engagement Peter Fitzpatrick as an application for iPads. In 2016 they moved the magazine online so more students had access to it.

The purpose of the magazine is to allow students from different majors to work together to create something new and build their portfolios, Sieren said.

“I want a student from any of those majors … to be able to come in and get something out of this experience that they really need for their own work or their own portfolio,” Sieren said. “Is it a personal sort of story? Or is it specific things [they are interested in] that they wanted … to be able to write about? There’s really nothing that’s off-limits.”

From bad Tinder dates, to adoption experiences, to Chicago ghost stories and a political campaign for a cat, FRANK covers a variety of topics.

“Bad Tinder Dates” features an interactive experience that allows the reader to choose whether they go on a date with one of the five people presented as options. The reader can read about each person before choosing whether to “swipe” right or left. Afterward, they get to see what the date might have been like.

“Ray 2020,” which features a video, fake campaign material and a bio about a candidate—who is a cat—came from a more serious place than it may seem.

“When we first started pitching stories in the early stages, what struck me most was that I was so tired of hearing political stories at the time,” Goldman said. “Ninety percent of news coverage that I would hear was all about Trump, and I was so sick and tired of hearing the mass sensationalist journalism.”

Because of this, Goldman wanted to create her own narrative. She pitched “Ray 2020,” which digs into the question of why people in younger demographics are more likely to turn to social media for news instead of doing their own research.

“I wanted to research that trend of ‘why does my generation go to social media first,’” Goodman said. “How can we fix it? What can we do to get people to read up … [and do their] research about the primaries and stop just listening to sensationalist news?”

Due to the pandemic, FRANK’s latest issue was created entirely in a remote setting for the first time.

But Sieren said working on FRANK remotely was not too different. They were able to use their same website, Basecamp, to keep track of everyone’s stories, and meetings were held over Zoom instead of in-person.

Emma Knapp, a senior photography major and FRANK contributor, said not meeting face-to-face was the most difficult part.

“I think the hardest part was that we did not all necessarily have the same schedules, and we could never see each other,” Knapp said. “So if there was something we needed to work on together, sometimes we couldn’t just hop on a Zoom call at the same time because maybe someone else was in class.”

Despite the difficulty of working with differing schedules, FRANK provided a sufficient educational experience for the students involved.

“My favorite part was getting to work with such a close team, even though we never saw each other in person,” Knapp said. “We worked super well together … and it was really nice being able to work with people that were just as passionate about making this magazine.”

You can check out the latest issue of FRANK here.