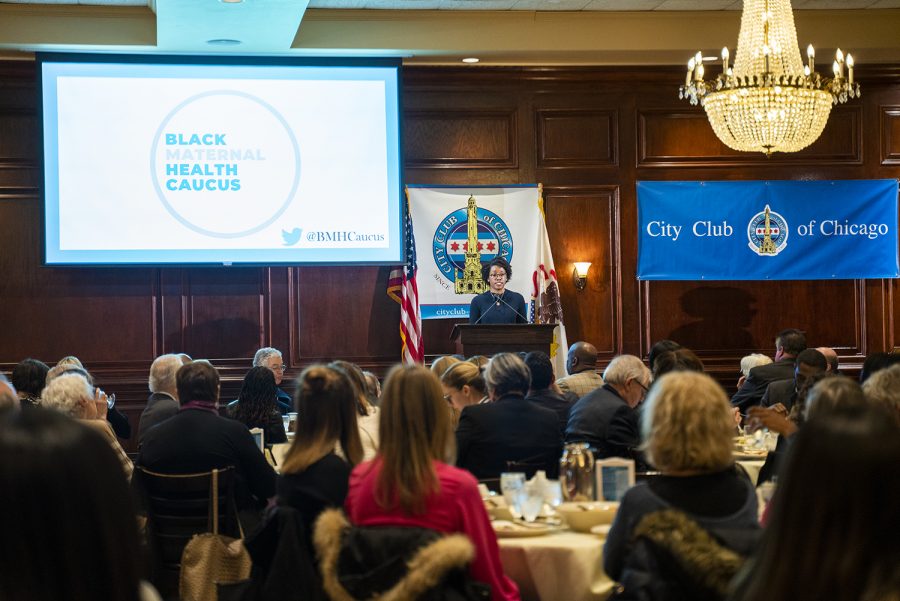 Rep. Lauren Underwood (D-14) speaks at City Club of Chicago, hosted at Maggiano’s, 111 W. Grand Ave., about the motivation behind the Black Maternal Health Caucus, which she helped form.

With Sen. Bernie Sanders (I-Vt.) in the front-runner position in the 2020 primaries, some more moderate Democrats are worried about his—and other Democrats’—electability if he were to face off against President Donald Trump in November.

But Illinois Rep. Lauren Underwood (D-14) said no matter which Democratic presidential candidate ends up at the top of the ticket, it is unlikely to provide much of a boost to her campaign—and the nominee could actually hurt her chances.

Underwood, a freshman representative running unopposed in the Tuesday, March 17 Democratic primary, was voted into office in 2018 by a mere 5 percentage points in a traditionally Republican district in the far western suburbs, covering parts of Dekalb, DuPage, Kane, Kendall, Lake, McHenry and Will counties.

She was part of a wave of female, freshmen Democrats such as Rep. Alexandria Ocasio-Cortez (D-N.Y.), who many pundits believe were elected in response to Trump’s 2016 election. But Underwood’s more moderate stances on issues such as health care set her apart from the growing group of democratic socialists like Sanders and Ocasio-Cortez.

During a Monday, Feb. 24 address to civic leaders before the City Club of Chicago, held at Maggiano’s, 111 W. Grand Ave., Underwood said the nomination of any of the eight Democrats currently on the ballot would be “neutral at best or really difficult at worst” for her bid.

Rather than relying on party politics and top-of-the-ticket excitement to boost her chances, Underwood’s re-election campaign is focused on community concerns, chief among them being health care.

Underwood said being the youngest black woman to serve in the House of Representatives is like a “superpower” because she is able to address issues affecting her generation in Congress.

“I ran for Congress in the 14th Congressional District of Illinois because the people in my community—the same community I grew up in—deserve better,” she said. “And since I’ve arrived, I’ve been committed to addressing the concerns of my constituents.”

Before running for office in 2018, Underwood worked under the Obama administration as a senior advisor at the U.S. Department of Health and Human Services to help implement the Affordable Care Act.

Since being elected, she introduced and sponsored the Chronic Condition Copay Elimination Act and the Primary and Behavioral Health Care Access Act of 2020, both of which have been referred to House subcommittees.

“We fought too hard to protect people with pre-existing conditions through the Affordable Care Act, and we refuse to backtrack on our progress in providing necessary services like preventive care and mental health treatments,” she said.

Underwood, however, does not co-sponsor Medicare for All and instead proposed her own bill, the Health Care Affordability Act of 2019, to expand the Affordable Care Act.

As a former nurse, Underwood has prioritized health care legislation during her first term in Congress, even co-founding the Black Maternal Health Caucus alongside Rep. Alma Adams (D-N.C.) last April.

During her City Club address, Underwood pointed to the racial disparities in health care. She said black women in Illinois are six times more likely to die from a pregnancy-related condition compared to white women, and 72% of those deaths are preventable, according to the Illinois Department of Public Health.

“It’s absolutely critical that we prioritize listening to black women and their families, [and] our caucus has been committed to doing that work,” Underwood said.

The fight for the Black Maternal Health Caucus was personal, she said. Dr. Shalon Irving, Underwood’s friend in graduate school at Johns Hopkins University, died suddenly three weeks after giving birth to a baby girl from complications of high blood pressure. She was 36 years old.

Underwood and Adams have taken an “all hands on deck approach” by working with groups representing health care providers, insurers and even ride-share providers to be able to address the “unique challenges” that often go unrecognized, she said.

For instance, if a woman does not have access to a car or cannot get time off from work, it does not matter if she needs to get to her primary care provider, Underwood said, explaining the interconnected non-clinical issues.

“When we talk about maternity care providers, we need to have a conversation about bias,” she said. “We typically call it implicit bias, but sometimes it’s explicit and sometimes it’s just racism.”

She said the legislation introduced by the Black Maternal Health Caucus goes beyond making health care more affordable by taking a holistic view on all possible factors that contribute to maternal health disparities. Funding for the caucus’ priorities are included as part of the Fiscal Year 2020 Labor-HHS-Education Funding Bill, the House’s first appropriations bill of the year, which specifically allocates funds to make black maternal health a priority.

“We need to start thinking about what we’re going to do when a black woman is dismissed and she says that something is wrong,” Underwood said.