‘Today we are all Ukrainian’: Chicagoans gather in Ukrainian Village, demand action against Russian invasion 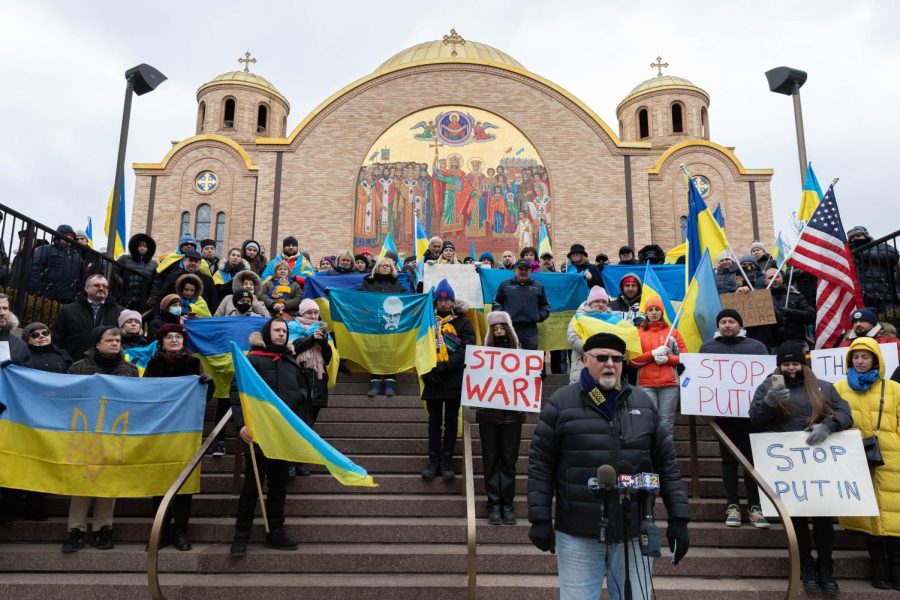 The rallygoers stand in front of Olha Ukrainian Catholic Church after the first Russian attack on Ukraine on Feb. 24.

By Olivia Cohen and Abra Richardson

Standing in front of countless signs and a sea of yellow and blue Ukrainian flags draped on the shoulders of protesters, Gov. J.B. Pritzker declared into the microphone: “Screw Vladimir Putin.”

The rallies held on Thursday, Feb. 24 and Sunday, Feb. 27 were hosted by the Ukrainian Congress Committee of America, Illinois Division.

Following Pritzker, Chicago Mayor Lori Lightfoot spoke, highlighting how Chicago has been a destination for Ukrainian migrants since the late 1880s, as Chicago and Kyiv are sister cities.

“[Ukrainians] have been a fabric of this great city since our earliest days,” Lightfoot said. “Putin has gone forward with his acts of aggression against the country of Ukraine simply because the people of Ukraine aspire to be free.”

The current state of Ukraine is an extension of war that began eight years ago. Russia started by invading the Crimean Peninsula in 2014 and continued its endeavors to border the provinces of Ukraine, escalating it since then.

“Hope and prayers are essential, but when you are dealing with Putin, hope, prayers and a javelin missile are even better,” said Quigley, who is the co-chair of the Congressional Ukrainian Caucus.

Among the speakers was Tanya Fedak, an 18-year-old senior at Burlington High School. Fedak said when she first heard that Russian troops invaded Ukraine, she was doing her homework and watching NBC Chicago.

Fedak said when the breaking news reported the first bomb going off in Ukraine, she felt numb because her grandparents were raised in Ukraine, and she still has family in the country.

“We knew it was a long time coming, but the fact that [the attack] finally arrived was a bit shocking,” Fedak said. “I think that this is the first attack on Ukraine where I am finally old enough to understand what’s going on. … I think it is important for people to understand that the younger generation does care and that things are going to be different this time.”

In an attempt to both combat the attacks and to punish Putin, the U.S., along with other European allies, issued a series of sanctions to Russian banks and the country’s elite, freezing Russia’s assets, and on Feb. 25 sanctioned Putin himself.

On Sunday, European countries and Canada announced they are closing their airspace to Russian planes to further isolate Russia. Since then, there has been pressure on the U.S. to do the same.

After local and legislative speakers gave closing statements, the crowd marched down Chicago Avenue all the way to the Loop, ending in Millennium Park.

Before the attacks on Ukraine began, Marta Farion, president of Kyiv Mohyla Foundation of America and vice president of the Ukrainian Congress Committee of America, Illinois Division, spoke with the Chronicle Feb. 21 when tensions were still escalating in Eastern Europe.

Jarosław Wereszczak, an American of Ukrainian descent and a resident of Ukrainian Village, attended the rally on Thursday to advocate for peace in Ukraine. Wereszczak said he thinks people outside of Ukraine do not understand the weight of the situation at hand.

The Chicago protesters pleaded for President Joe Biden to send troops into Ukraine to help fight the Russian army, as well as for support from all NATO countries. This topic has been debated throughout the U.S., but according to a poll by the Associated Press, only 26% of Americans believe the U.S. should play a major role in the Russian-Ukrainian conflict.

“Putin has to be stopped now, and he has to return back to Moscow. We need him out of Ukraine; we need him out of the West,” said Pavlo Bandriwsky, vice president of the Ukrainian Congress Committee of America, Illinois Division. “We can only do this with the strong support of the West.”

Bandriwsky said it is “very important” people step up for human rights, democracy and the rule of law.

Farion said despite the attacks to tear Ukraine down, it has only helped bring Ukrainians together as a country to fight for democracy.

“[Putin] united everyone … against Russia because people do not want to lose their freedom,” Farion said.