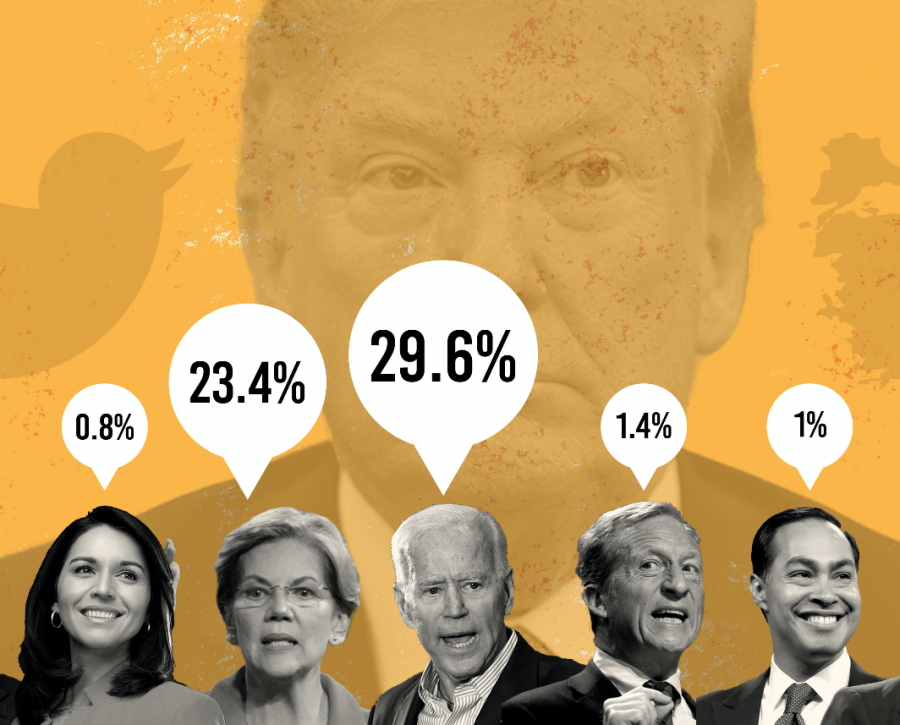 In the most crowded presidential debate in history with 12 candidates, there may as well have been a 13th podium set up for President Donald Trump for how prevalent he was in the discussion.

The debate also marked Sanders’ return to the campaign trail after suffering a heart attack two weeks ago.

Although many of the standard talking points were discussed throughout the night, including healthcare, gun violence and the job market, the debate often turned toward criticism of Trump. That comes amid polls showing public attention shifting in favor of impeachment as the U.S. House continues its investigation.

The first topic of the debate was each candidate’s response to the potential impeachment, a departure from the last three debates that all kicked-off  with the topic of healthcare, showing the political weight put on this issue in the 2020 race for president.

While all the candidates reiterated the necessity of Congress exploring impeachment, they ranged in their damnation of Trump’s actions with Ukraine, which sparked the inquiry’s official announcement in September.

Harris was most fervent on impeaching Trump and predicted it would be a speedy process given his public statements.

“He told us who he was,” Harris said. “Trump told us he could shoot somebody on Fifth Avenue and get away with it. He has consistently, since he won, been selling out the American people.”

Booker was more tepid in his response, calling for a fair trial built on patriotism rather than partisanship. His response reflects the 38% of Americans who still do not support an impeachment inquiry, according to an Oct. 8 poll by The Washington Post and George Mason University’s Schar School of Policy and Government.

However, Warren—considered among the three front runners, along with Biden and Sanders, according to the latest polling—pointed to her public support for an inquiry after former Special Counsel Robert Mueller’s testimony before Congress on obstruction of  justice and Russian interference in the 2016 election.

“Look what happened as a result—Donald Trump broke the law again in the summer, broke it again this fall,” Warren said, in reference to Trump’s request that Ukraine dig up “political dirt” on the Bidens. “We took a constitutional oath and that is that no one is above the law, and that includes the president of the United States.”

Meanwhile, Biden defended the foreign relations practices of him and his son, Hunter Biden, that had prompted Trump to call Ukrainian officials, which, as CNN’s Anderson Cooper pointed out during the debate, have surfaced no evidence of wrongdoing.

Biden said the reason Trump was going after him was that Trump knows if Biden is voted in as the Democratic nominee, he will “beat him like a drum” in 2020.

Throughout the night, though, most of the heat from candidates was aimed at Warren, who has surged in some polls and in fundraising to look like a likely frontrunner for the nomination. Although Booker called out the other candidates for “tearing each other down because we have a different plan,” that did not stop candidates such as Buttigieg from criticizing Warren’s Medicare for All plan. Buttigieg and others strongly criticized Warren for not saying whether she would raise taxes on the middle class as part of her strategy.

Biden, who has been the target of attacks in previous debates, went after Warren, as well, claiming he was responsible for her success in creating the Consumer Financial Protection Bureau during his time as vice president. Biting back, Warren said she “deeply” appreciated Obama’s help in passing the agency into law, to the laughs of both Biden and the audience.
On Turkey
Despite Booker’s calls for respect and love on the debate stage, candidates continued to clash on each other’s policy proposals, most decisively with foreign relations in Turkey in the wake of Trump’s contentious withdrawal of U.S. troops—a call that resulted in criticism from both sides of the aisle and allowed an invasion of Syria by Turkey, causing mass casualties of the Kurdish people, who have been strong U.S. allies in the past.

The move has spawned debate over what this means for the U.S. now that the ISIS terrorist group in Syria is not threatened by U.S. troops. During the debate, Biden went as far as to predict a potential attack on U.S. soil.

However, Gabbard, an Iraq War veteran, was forced to play defense during the discussion on Syria given criticism over her 2017 meeting with the Syrian President Bashar al-Assad, who has close ties to both Russia and Iran. Gabbard called out CNN and The New York Times, both of which hosted the Tuesday debate, for “smearing” her.

“Not only that, The New York Times and CNN have also smeared veterans like myself for calling for an end to this regime-change war,” Gabbard said. “Just two days ago, The New York Times put out an article saying that I’m a Russian asset and an al-Assad apologist and all these different smears. This morning a CNN commentator said on national television that I’m an asset of Russia.”

Gabbard then voiced support for pulling out of Turkey through a negotiated solution, prompting a sparring match with Buttigieg.

“Well, respectively, congresswoman, I think that is dead wrong. The slaughter going on in Syria is not a consequence of American presence, it is a consequence of a withdrawal and a betrayal by this president of American allies and American values,” said Buttigieg, also a Navy veteran of the Afghanistan War. “Part of what makes it possible for the United States to get people to put their lives on the line to back us up is the idea that we will back them up, too. … I would have a hard time today looking an Afghan civilian or soldier in the eye after what just happened over there.”
On technology
Finally, a conversation began with questions from moderators on breaking up technology companies—specifically Facebook, whose founder and CEO Mark Zuckerberg recently came out against Warren. The senator has called for breaking up the platform, which Zuckerberg responded to in leaked audio of an internal company meeting, as reported Oct. 1 by The Verge.

Notably, Zuckerberg has said breaking up the company would make Facebook more liable to election interference, as it was by Russia in 2016.

However, Harris quickly spun the topic to a call for candidates, Warren specifically, to join her in her demand for Twitter to take down Trump’s Twitter account, which Harris called “a matter of corporate responsibility.”