The community opens up: Conversations about racism and the Black experience are ‘uncomfortable,’ sometimes traumatic 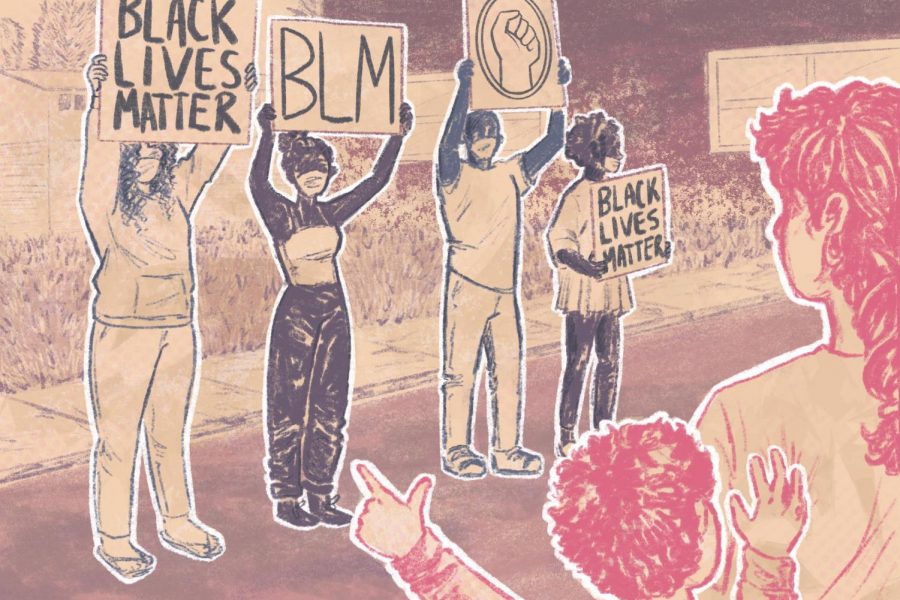 George Floyd’s death felt like the death of a family member for Layla Broderick.

Broderick, a junior marketing major, said conversations about the unjust killing of Floyd, a Black man from Minnesota, are “heartbreaking” for her and the Black community to hear because police brutality toward Black people “has been happening for years.”

“We had to sit down and have another conversation about race,” she said. “When police brutality happens, it could very well be my brothers or my dad, so it feels like somebody [or] a part of the community has passed away.”

Broderick often talks to her mom and sister about violence against Black people because it helps them process what is happening and find ways to heal, she said.

Broderick said her family asks themselves how they can help, move on and properly protect themselves.

Cicely Green, a mental health counselor at Grace Couple and Family Therapy, 283 Fillmore St. in Oak Park, Illinois, works with clients who are experiencing racial trauma, which is traumatization from stress and pain caused by one’s experience with racism and prejudice.

Green said racial trauma can also be transferred from one generation to the next when a parent has experienced it and then passes it down to their children—also known as generational trauma.

Green said racial trauma can cause anxiety, hypervigilance, nightmares, flashbacks, difficulty sleeping and depression. Racial trauma is not listed in the Diagnostic and Statistical Manual of Mental Disorders, or DSM-5, as a disorder or mental illness. But Green said she identifies racial trauma in clients if they experience symptoms as a reaction to feeling unsafe because of their race.

The week after the video of Floyd’s death became public, the rate of anxiety and depression among Black Americans rose from 36% to 41%—more than any other racial or ethnic group—as reported by the Washington Post June 12. This reflects mental health data from the Census Bureau’s weekly Household Pulse Survey published by the Centers for Disease Control and Prevention

Broderick said she also talks about the Black Lives Matter movement with her non-Black friends, though it is easier to talk with Black friends because they have similar experiences and she does not have to explain her point of view to them.

“When I have a dialogue with my white or non-Black friends, I kind of have to … try to choose my words carefully and try to get across the idea or the situation,” Broderick said.

It is not the responsibility of a Black person to educate others about their Black experience because it can be very traumatizing to recount past experiences with someone who is not a person of color, Green said.

Jeanne Petrolle, an associate professor in the English and Creative Writing Department, said she has found it difficult to talk to her 16-year-old son about the current protests. But she said as a parent, she has the responsibility to talk about the importance of anti-racism, how to take action to “support the country” and how to be an effective citizen.

“He’s grieving, and I think he doesn’t know how to process his grief so his conversational strategy when he’s feeling overwhelmed with emotion is to shut down and not talk,” Petrolle said.

Though it can be overwhelming, Green said it is important to share positive Black experiences. She said entertainment featuring Black people, such as movies, too often depicts sad scenarios like the prison system, drugs or poverty.

Protesting on the streets is one way to take action, Petrolle said. Her family is donating to organizations that support the movement such as My Brother’s Keeper Alliance through the Obama Foundation, which provides opportunities in educational programs and workforce training in communities for young men of color.

“George Floyd’s murder was so tragic and so disturbing that there can be a possibility of feeling like, ‘We’ll just never change systemic racism,’” Petrolle said. “But I think it’s really important not to give in to despair and to continue to practice hope, and by having conversations with each other, we stay connected.”

Junior acting major Sierra Kruse said one of the ways she is checking her white privilege is by informing her family about issues that do not affect them.

Kruse said her father is more open to having a dialogue about the current unrest, but her mother and brother are not, so she has found ways to “sneak out” of the house to attend protests.

“[My dad] leads with a lot of questions; he agrees to disagree about certain parts of it,” Kruse said. “But I think those conversations with him are the most fruitful because … I can get to see his perspective and he can get to see mine from being at the protests.”

Kruse said she thinks her mother and brother believe if they do not talk about the protests, then it is as if they are not happening. Rather than being scared of what is to come, she said they should be “hopeful for the future.”

“It’s important to keep going and not put off the conversation because of your discomfort,” Kruse said. “Discomfort is a privilege and we should work through it, and we should be checking ourselves by actively engaging in those uncomfortable conversations.”