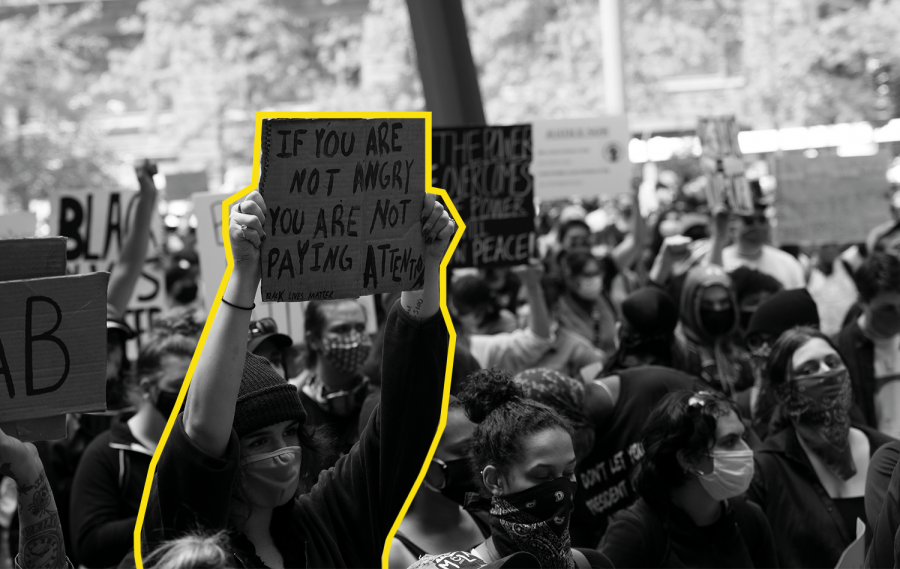 Editor’s note: This article is one in a series of stories from the Communication Department’s award-winning Echo magazine,  featured this summer on the Chronicle site.
_____________________________________
The Black Lives Matter movement began with a hashtag on social media in July 2013. By June 2020, after the killing of George Floyd and other Black people at the hands of police officers, it became one of the largest social justice movements in U.S. history.

Social justice activists in Chicago continue to advocate for their city and community to ensure the impact of the Black Lives Matter protests and rallies that took place during the summer of 2020 do not fizzle out.

Kobi Guillory, co-chair of the Chicago Alliance Against Racism and Political Repression, and Caullen Hudson, founder of SoapBox Productions and Organizing, are two of the many people working to keep the movement in conversation and moving forward. These interviews were edited for length and clarity.

My mindset was, ‘We have to get out on the streets.’ People are angry. People are going to be out on the streets when something like that happens. It was the same thing when Michael Brown was killed, when Laquan McDonald was killed, when Tamir Rice was killed. We need to make our voices heard and tell whatever power structure that this is not going to go on forever [that] the police are not going to keep killing us forever.

[Chicago] handled it exactly how we expected them to. That first protest on May 30, we had actually been planning that for a few weeks. It was originally supposed to be about freeing torture survivors, but before then, George Floyd was killed on camera, it went viral and there were protests everywhere. Our protest grew far beyond what we were expecting it to be. We were expecting a couple hundred people and it turned out to about 20,000 people.

The police started beating people up, like they were prepared to do that. When we arrived, they had batons out and ready. So there was just a lot of violence, a lot of arrests.

The City Council and the police are always going to be a couple of steps behind our movements and the general public. Something that was really striking after [the protests] is that every major city in the U.S., except Chicago, had some sort of promise of defunding the police or instituting some kind of police accountability measures.

At the same time, [we] are currently pushing the Empowering Communities for Public Safety Ordinance to City Council. There has not been a direct change yet, but it definitely opened people’s ears, and you know the City Council members aren’t as comfortable with the ‘status quo’ as they were this time last year.

We have been talking about torture survivors, people who were tortured by [Chicago Police Department] detectives years ago. People like Gerald Reed who has been in prison since 1990 [and released in April 2021] for a crime he didn’t commit. We need those names to be on everyone’s minds. Next to Gerald Reed, in prison there are hundreds of people that we know of who are innocent and who were wrongfully convicted.

We need to challenge this idea that police are above the law. They need to be held accountable by the communities they are running around in and once that happens people will make the necessary changes for their own communities.

Ahmaud Arbery gets killed. Folks are angry, upset. We see a video, it’s very sad. I’m in the fitness community so a lot of fitness folks are going on their 2.25-mile run in honor of him and posting about it, and I’m just scrolling through social media like, ‘OK? What is this doing?’ Three weeks later, George Floyd gets killed on a Monday. I see it happen on the news, and it is of course tragic and horrible and gruesome. This may be an unpopular opinion but for me, ‘Oh, it’s [just another] Monday.’ Them killing folks isn’t shocking to me. There is Laquan [McDonald] in Chicago, there is Rekia Boyd, there is Ahmaud Arbery and Breonna Taylor.

I have a lot of feelings but, generally speaking, looking back at 2020, I feel a broad sense of power in a lot of ways that I hope we harness for the future.

You can’t look back pre-George Floyd and think about certain things the same. I think that’s huge and the more folks who aren’t OK with the killing of their citizens, the better. On the narrative level, there has been immense change. We’ve seen policy changes, [but] not much in Chicago, of course. There is an immense amount of work to be done. A lot of what we do in the movement is about us.

Leverage the power you do have in institutions that you are involved in or where you work. Find tangible ways to stay tapped in. Question yourself, question your friends. Keep that internal work going as well as that community work.

You are going to have the most influence over the folks that know you and love you. Talking to your parents about the violence of policing and reform is still not going to do anything. That’s a hard conversation especially when you aren’t used to having them. [So ask yourself,] how are you mobilizing and challenging your people and yourself?
_____________________________________
The 2021 issue of Echo will be available this summer on newsstands across campus, and PDFs of all issues are available online.