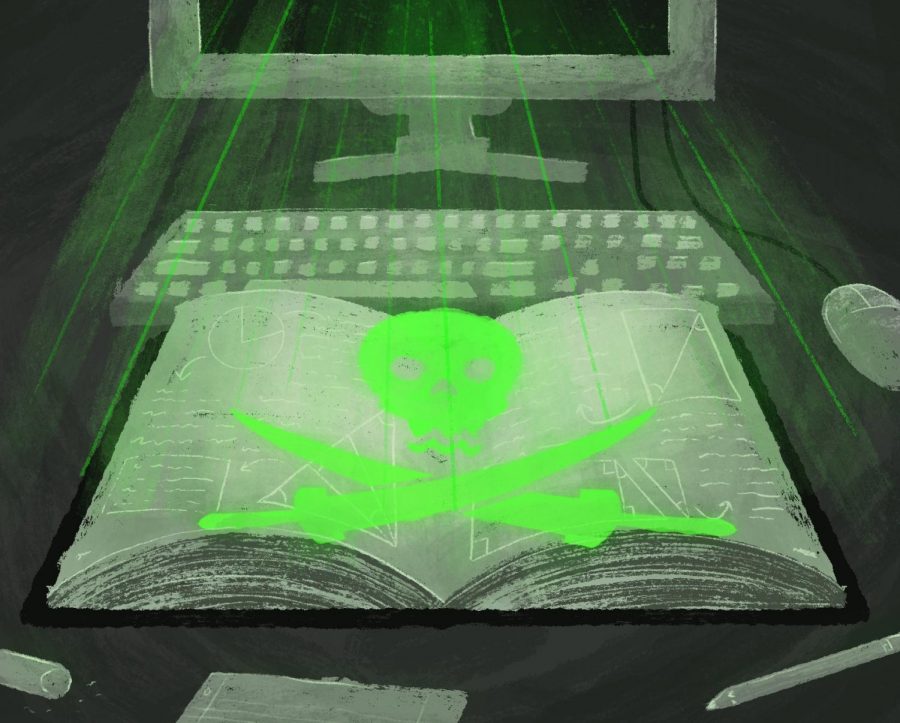 It is no secret: The cheapest way to get a textbook is not to rent it or buy used, but to download a copy from the internet.

But according to Matthew Oppenheim, lead counsel for the Educational Publishers Enforcement Group, acquiring textbooks from the internet is legally under the same category as downloading copyrighted movies or music for free—piracy.

“Understand that, first and foremost, it’s unequivocally illegal to download a textbook from the internet,” Oppenheim said.

The EPEG, which includes common textbook publishers such as Pearson and Cengage, works collectively to address intellectual property issues and piracy.

Oppenheim said piracy is a challenge the publishing industry has been facing for many years—both in the form of bootleg physical textbooks printed overseas and distributed in the U.S., and digital copies disseminated online.

Oppenheim said while students often cite cost as the reason they download digital copies, textbooks are not as expensive as students think.

“It’s easy to complain that it’s expensive, but when you look at the relative cost compared to the other parts of the education, it’s actually fairly cheap,” he said.

But not all textbooks are affordable for some students. As reported by The Chronicle in April 2018, 36% of college students said they are food and/or housing insecure with 42% of community college students struggling to find a meal.

“The sad irony is that, ultimately, a $90 textbook could lead a student who does not obtain [it] to neglect their homework for a $2,500 course,” said Paula Brien, an academic adviser in the College Advising Center.

One junior cinema art and science major downloaded a textbook for a Liberal Arts and Sciences course. The textbook, which he said would have typically cost $200 if purchased legally, was not used enough in the class to justify the cost.

The Chronicle is not naming the student to protect his identity.

“It was a pricey book and I was very pleased when I found out how [little] we would be using it in class that I decided to download it instead,” he said. “It’s disheartening when you spend that money and you don’t really end up using it.”

Oppenheim said participating in piracy can actually contribute to keeping textbook prices high. In order for publishers to decrease their prices, it has to be affordable for them to do so. If a smaller number of people are willing to pay for their textbooks while a larger percentage are illegally acquiring theirs, publishers have to offset costs and prices go up, he said.

Kristy Bowen, the access services assistant and course reserve coordinator at the Columbia Library, 624 S. Michigan Ave., said many of these expensive textbooks are available for free through the library. She said the library keeps copies of most textbooks over $40.

Bowen said while she understands the financial concern when it comes to textbooks, she still would not advise students to download them, both from a legal and an ethical perspective.