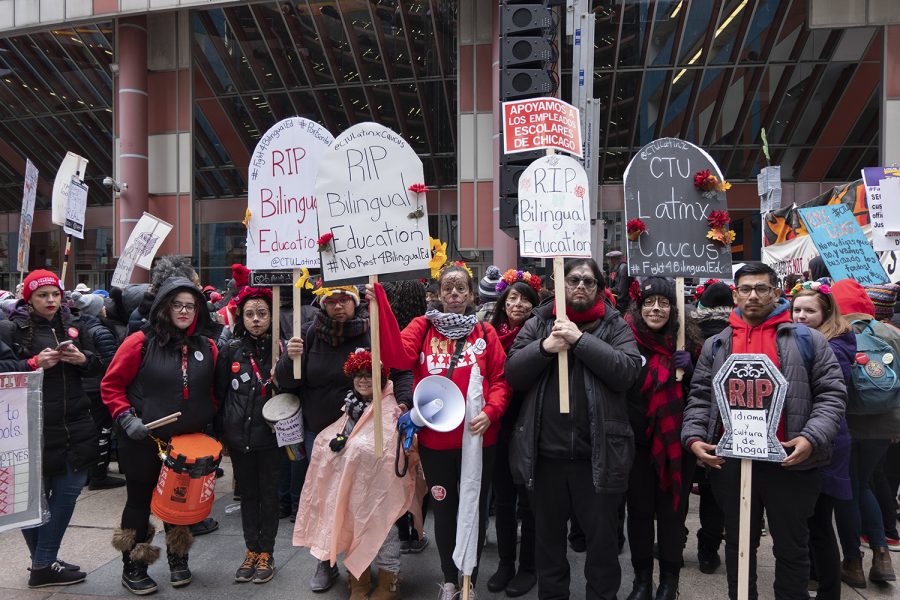 Bilingual Latinx teachers organize outside City Hall Oct. 23 as part of the CTU strike amid negotiations with the city.

In a show of force seven days after Chicago teachers and support staff went on strike, teachers and Chicago Public Schools staff who had been picketing in front of schools across the city descended on City Hall during Mayor Lori Lightfoot’s budget address.

Lightfoot proposed an $11.65 billion budget she said will close an $838 million deficit. The proposal shows an anticipated TIF surplus of $300.2 million—$163.1 million of which would go to CPS.

The protest was organized in collaboration with ally organizations—such as Grassroots Collaborative, Reimagine Chicago and United Working Families—to send the message that teachers are not backing down.

“In the United Working Families aldermen, you have your bargaining committee, and we will be with you every single step of the way in this budget fight,” Ramirez-Rosa said. “Before we go to Mayor Lightfoot and say, ‘You have our vote on this budget,’ we are going to work with you to make sure that we finally have a budget for the many and not the few.”

Demonstrators continue to call for smaller class sizes and staffing guarantees, which the union argues were conditions Lightfoot campaigned for when she ran on a platform of equity and educational justice during her campaign for mayor.

CPS students have not been in class since Oct. 16, but appear to be close to a deal.