Students write wishes for a better Columbia to President Kim 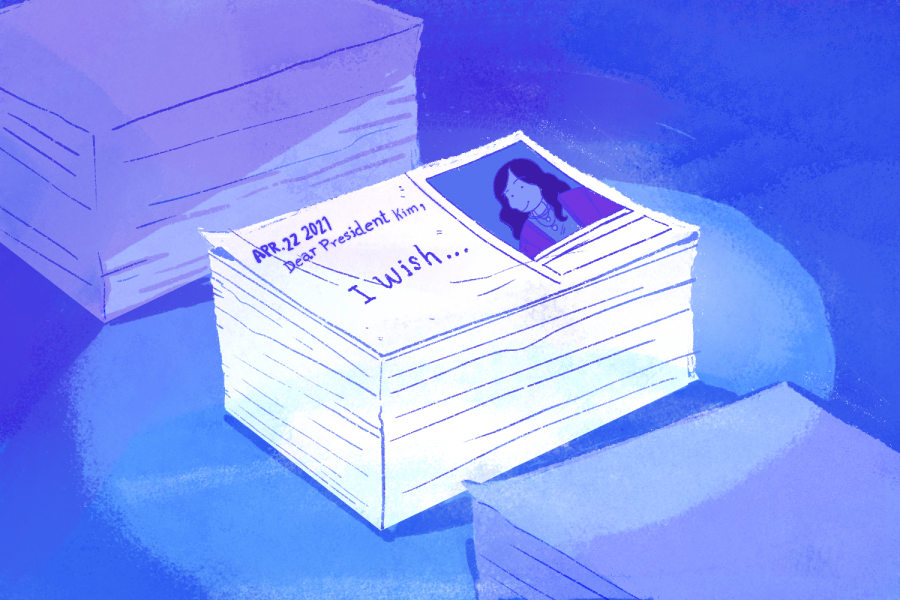 If you were stopped on the street and asked to write a letter to Columbia President and CEO Kwang-Wu Kim, what would you wish to say?

Students taking “Creative Communities: Art, Design and Change” were asked to do just this.

The project is based on the ongoing project, “I Wish To Say” by Sheryl Oring, an artist and professor of art and art history at Wayne State University in Detroit. Oring asks people on the street to tell her what they would like to say to the current U.S. president, and she writes their notes on a postcard.

Joan Giroux, a professor in the Art and Art History Department, saw this project as a necessary addition to the curriculum.

“[Oring] is making … this community interactive art project that is asking for people to become active citizens by expressing themselves to the president of the United States,” Giroux said.

For the assignment in Giroux’s “Creative Communities: Art, Design and Change” class, students were instructed to watch Kim’s state of the college address and write their own version of a postcard.

“I like the whole environment Columbia has built,” Syed said. “You don’t feel like you’re being judged for who you are or what background you come from.”

Syed said her experience so far at Columbia has been positive and to further improve the college, she asked in her letter that the administration take time to listen to student and faculty input before making decisions that impact the student body.

Giroux pulled from her previous experience volunteering as a lobbyist when instructing students on what to write by telling the students to start with something good about the college and Kim’s leadership.

“It’s like that [saying] about getting bees with honey,” Giroux said. “[People are] more open to your thoughts if you’ve given them a way to feel good about what’s being said.”

Nolan Whalen, a junior photography major, started his postcard by thanking Kim for keeping students safe during the pandemic.

He then wrote about Columbia’s Diversity, Equity and Inclusion requirement, and how he was appreciative of the work administration and professors have done to weave diversity and inclusion into the curriculum.

Whalen said while he agrees with Kim’s suggestion to teach students more practical skills as part of the curriculum, it raised some concerns about the impact that expanding the curriculum could have on students.

“In certain ways, the world is putting too much pressure on us to be its definition of perfect,” Whalen said.

Despite Columbia’s flaws, Whalen ended his letter with his hopes for the future.

“May the college continue to present its vision and curriculum to students in new and creative ways that may never let there be a dull moment where we feel stagnant, but may we instead be set up to thrive,” Whalen said.