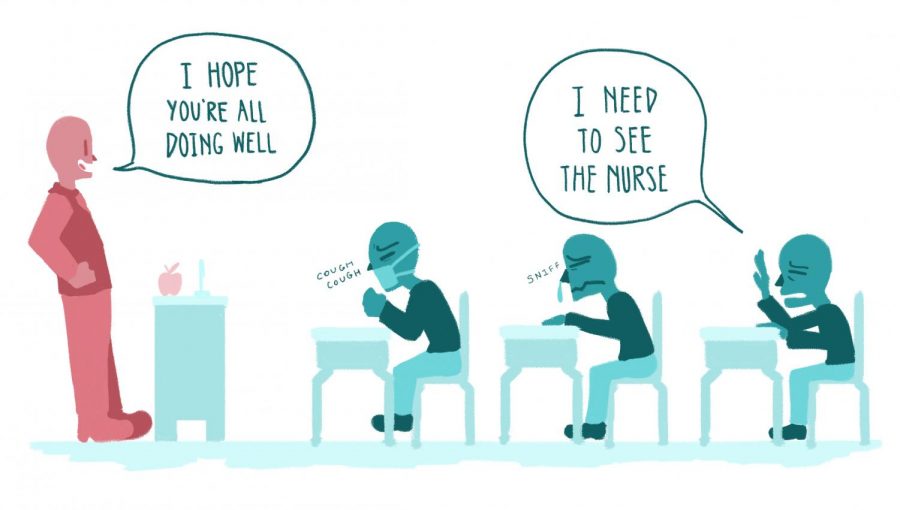 When Bri Eittreim planned her trip home to Minnesota, she made sure everything was in order. She had her bags packed, her transportation home arranged and was prepared to get a flu shot. If she had not gone home, she would not have been vaccinated at all because she said the cost of an out-of-state flu shot can strain her budget.

Without insurance, flu shots at CVS and Walgreens can cost nearly $40 for those aged 2 to 64.

Eittreim, a junior fashion studies major, has illness-induced asthma, which means catching the flu could result in her being hospitalized for days.

“Most people fail to realize that the free flu shots offered through local pharmacies [are] most often paid for by their insurance,” said Eittreim, whose out-of-state insurance does not give her all of the benefits in Illinois as it would back home. “I shouldn’t have to go back to Minnesota simply to get a flu shot.”

Students can receive flu shots in Chicago, just not at Columbia, which only offers the flu shot to staff and faculty with insurance through the school. Columbia discontinued flu shot availability for students because there was not much demand for the vaccine when it was offered, said Keisha Cowen, senior director of campus communications.

“If a student expresses need for a flu shot but can’t afford it, the Health Center or Student Relations can recommend a location where students can receive a flu shot at low- or no-cost in the area,” Cowen said in a Thursday, Nov. 7 email statement to the Chronicle.

According to the National Foundation for Infectious Diseases, 61% of students said lowering the price of a shot or making it free would significantly increase the likelihood of them going to get the shot.

The same study found only 8 to 39% of students on college campuses received the flu vaccine in 2017, with 46% of college students saying they “typically get vaccinated.” That is far below the Office of Disease Prevention and Health Promotion’s “Healthy People 2020” goal, which aims to have 70% of those above the age of 18 receive a flu shot.

The Centers for Disease Control and Prevention recommends that everyone get the vaccine by the end of October, according to an Oct. 16 email sent to some Columbia staff from the Human Resources Department. But, with the winter months in full swing, students said they have received little-to-no communication from the school regarding the flu shot.

The mid-October email from HR alerted staff who have insurance through the school to “free” flu shots available to them at the CareATC Clinic, an on-campus health center for faculty, staff and their families that opened in March 2008.

Max Goldberg, sophomore photography major, said he has not seen the college do much to encourage students to receive the vaccine. Goldberg said he might have seen a poster or two, but thinks the school needs to do a better job with advertising if they would like students to get the vaccine at off-campus clinics, as the school does not offer students the flu shot anymore.

Beverly Anderson, associate dean of Student Health and Support, said the flu vaccine is only asked about on rare occasions.

The Centers for Disease Control and Prevention also recommends people keep their distance from those infected, which might pose a challenge for the approximately 32% of students who live on campus and the students who live off-campus with either roommates or family.

Some parents in the Columbia College Chicago Families private Facebook group said their students received shots during previous years, while others said it is not the school’s job to give students flu shots.

“I don’t see why Columbia owes our kids a flu shot,” wrote Sara Taylor on the Facebook page. “It’s our responsibility to make sure our kids get their shots.”

In a follow-up email with the Chronicle, Taylor said, “I believe Columbia doesn’t owe us [flu shots]—unless they roll it into tuition. Many insurance programs already have that in their costs as a way for preventive care.”

Another parent posting in the Facebook group wrote she has a daughter whose out-of-state insurance does not cover the shot, similar to Eittreim. She said her daughter received the vaccine at a health fair during the first few weeks of school in her first two years at Columbia but had to go to Walmart this year.

Troy Mize, a sophomore film major, knows his parents would want him to get a flu shot. He has not yet gotten the shot this year but plans on doing so soon.

“It’s just kind of common sense,” Mize said. “With the fact that the winters are so cold and that people do get so sick easily, it is more understandable to get a flu shot.”