Students disappointed by SXSW cancellation due to coronavirus concerns 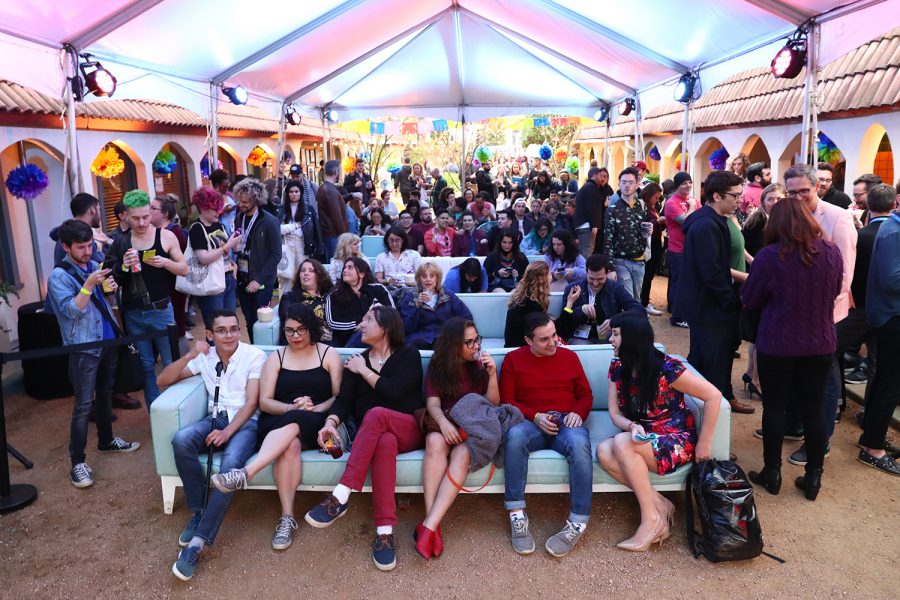 Attendees of SXSW mingle during Drag Bingo at Austin Motel on March 11, 2019 in Austin, Texas.

Armand Rome was in a studio located in the 33 E. Ida B. Wells building recording a song he was planning to promote in the next week in Austin, Texas, when he got a notification that the South by Southwest arts and music festival, or SXSW, was cancelled due to growing health concerns surrounding the coronavirus.

As an artist signed to the student-run record label AEMMP Records—as part of the Arts, Entertainment and Media Management practicum––Rome, a senior music business major, said this festival was an opportunity he had been looking forward to for years.

“It really is a big blow. Not just to me, but to the whole AEMMP team,” Rome said.

Each year, students from the Business and Entrepreneurship Department, the Cinema and Television Arts Department, and those enrolled in the AEMMP practicum courses attend the 10-day festival, this year scheduled to run from March 13 to March 22.

The college pays for the students’ festival wristbands and hotel, but each student is responsible for their travel fare, according to Brett Zera, a junior communication major and AEMMP student. He said the airfare is non-refundable.

“It was an expensive flight, but I was okay with spending it because it was a good opportunity and a school event, so I just bit the bullet a little more than I [normally] would have to fly somewhere,” Zera said.

Attempts to contact Business and Entrepreneurship Department faculty on Friday were unsuccessful.

For the first half of the semester, students in AEMMP courses compiled work from signed artists to showcase at the festival and were gearing up to promote the label and its upcoming projects, Zera said.

Zera, who manages the artists signed to the label, said one of the main reasons he joined the class was to attend SXSW.

The AEMMP practicum courses only run during the spring semester, and although Zera could take the class again next year, he said he is sad to not go to the festival because of the hard work the entire class put into preparing for it.

Although disappointed, Zera said he knew the cancellation of the festival was a possibility because of other major festivals such as Ultra in Miami being cancelled days prior amid concerns the coronavirus could spread rapidly in large crowds.

On Sunday, March 1, a petition was posted on Change.org proposing the cancellation of the festival. By Wednesday, March 4 the petition had received nearly 40,000 signatures. Although there are no confirmed cases of the coronavirus in Austin, there are 17 cases in Texas, 11 of which are in San Antonio.

Despite the disappointment, Zera said AEMMP has a number of other projects in the works and will try to move forward.

In a Friday, March 6 email statement, Keisha Cowen, senior director of campus communications, said the health and well-being of Columbia’s students is most important.

“While it’s disappointing they aren’t able to attend SXSW, Columbia supports the City of Austin and SXSW in their decision to cancel the festival until further notice,” Cowen said.

Although the AEMMP team has attended the festival in previous years, Rome said this was going to be the first year the label was going to be recognized as an official “SXSW entity.”

“This was going to be a big step for the label for the future to see how we could build with South by Southwest,” Rome said. “It seems we are going to have to put that on the back-burner for a bit.”

Still, the label will continue its plans to put on a free pre-SXSW showcase, “AEMMP: LIVE,” on Thursday, March 12 at the HAUS, 623 S. Wabash Ave. Stafford Hipp, a junior music business major, said the performance will now just be a celebration of Chicago music at Columbia.

As an AEMMP student, Hipp is on the event team and was at the forefront in working alongside the college to find a venue for AEMMP artists, booking artists, scheduling the festival itinerary and coordinating with Alumni Relations to set up a panel with Columbia alumni. Hipp said he is in disbelief that the event has been cancelled.

“We did a lot of planning,” Hipp said. “It was really going to be a celebration of Chicago art in Austin.”