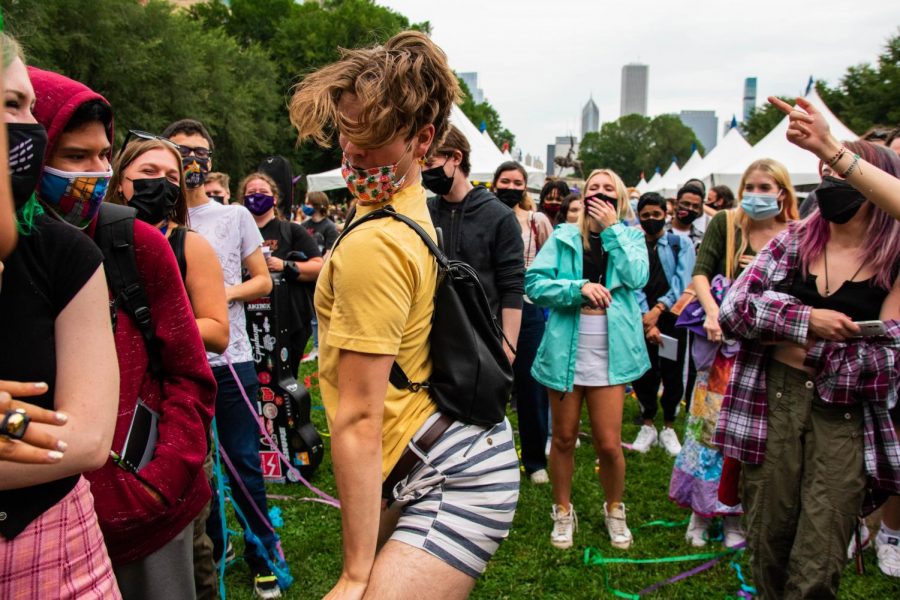 Columbia students circle around to dance to the music being performed on stage.

Columbia first-year students invaded Grant Park last week — dancing, laughing, bumping elbows — seeking the camaraderie, spirit and touch they have been without for more than a year.

Kim gave his first in-person address in 18 months to the crowd of new students.

“Our differences, and there are many, make us stronger, make us better [and] make us more valuable,” Kim said. “The core principle of being part of this institution is the idea of embracing difference. And I hope you will join us in that.”

Kim advised students to explore themselves both creatively and personally and suggested that students “take advantage of everything [the college] has to offer.”

“Get to know your faculty, explore the facilities, meet as many of your colleagues as you can,” Kim said. “That’s how you’re going to squeeze the full value out of Columbia and make it yours.”

In an interview with the Chronicle, Kim said Convocation is a sign the college is “back” and looking forward to the future.

“The next phase for Columbia is building a creative community and being a place where young creatives come to explore and test what it means to be authentic in the world,” Kim said. “For me, this is really about rebuilding our community. We’ve all been under wraps for 18 months.”

The event also featured booths hosted by student groups, where new students could speak with club members and get to know more about the groups and what they can expect from them.

Bri Ramirez, a sophomore film major and member of Body Haven, attended Convocation on behalf of the club. Body Haven focuses on giving people a space to “feel however the hell it is they want to feel,” as the club centers on body positivity and the fat liberation movement.

“Nobody is safe from thinking about their bodies,” Ramirez said. “We live in a world where we’re supposed to look like the people on magazines, and realistically we don’t. And that’s okay. And people have to know that that’s okay, too.”

Prospective members of Body Haven can look forward to “a bunch” of events planned for March, which includes a plus-size inclusive fashion show. The club meets every other Friday from 5 to 6 p.m. Students who are unable to meet in person are able to attend virtually via Instagram live, and the group sends newsletters to club members.

Columbia junior Zion Perry, the events coordinator for the Renegades E-Sports team, also shared his excitement for the group in the upcoming semester.

“There’s going to be a lot of big changes,” Perry said. “We’re looking to get a bigger E-Sports room and more equipment with a bunch of different games. We’re going to be throwing a lot of tournaments, hopefully. A lot of our teams are more active.”

While the club doesn’t currently have a room they are able to meet in due to the small size, they are very active on Discord.

“We usually meet online,” Perry said. “So if there’s any interest in joining a team — I know [the] League of Legends [team] is doing tryouts soon — students can join our Discord.”

Meetings for new and transfer students interested in joining the Renegades E-Sports team will be held on Sept. 10 and Sept. 16 in the 600 S. Michigan Ave. building. Both meetings will start at 6:30 p.m. and be held in the Ferguson Lecture Hall.

Students were also treated to performances from fellow Columbia students such as T Star Verse, Natalie Finfer, Zorila and more.

Finfer, better known as Finger Beats, is a senior audio design and production major. Coming off a performance at the Lyrical Lemonade Summer Smash Festival in June, Finfer shared her excitement about performing at Convocation for the first time.

Finfer shared her feelings on being a senior and how returning to on-campus learning after around 18 months has impacted her.

“It’s weird, because I feel like I kind of … spiritually graduated,” Finfer said. “I feel like I was like, ‘Okay, I did college, I had that.’ But now coming back I feel like I’m going in a portal back, and I’m happy because I still never got my full college experience.”

Finfer, who has an upcoming show at Subterranean and also performs at Empty Bottle, is hopeful and excited for the return to campus.

“I’m excited to come back and do more, but it’s also just weird because a part of me thought I was done with that,” Finfer said. “And now I’m back, and I’m stoked about it. It’s just crazy.”