The Columbia Chronicle • May 11, 2019 • https://columbiachronicle.com/student-center-ready-to-open-its-doors-to-students-fall-2019

Student Center ready to open its doors to students Fall 2019 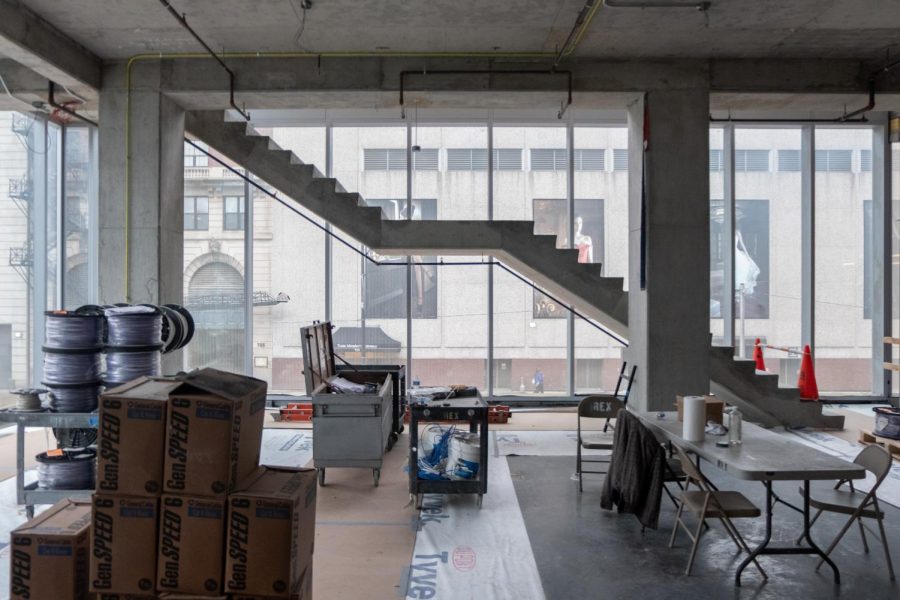 Although nails are still strewn across the concrete floors and wooden frames are temporary placeholders for walls, Columbia students will be able to relax, study, create and collaborate  in the Student Center on the first day of the Fall 2019 semester.

The structure is vast but designed minimally, constructed mainly with bare materials, such as concrete columns, floors and stairwells, steel beams and a lot of glass, said Director of the Student Center Andy Dutil.

“That was designed as an intention, so that the students and the student work in the building really shines,” Dutil said.

Student employees at a welcome desk will be the first people students see when they enter through the main entrance, rather than the security guards as in other Columbia buildings, Dutil said. The center will employ 25 to 30 students total.

“One of [student center management’s] biggest things is making the building student-run, so they want to have a lot of students work there,” Johnson said.

During the information session, two positions were described to students: a technical AV position and a general crew position, Johnson said.

Applications for Student Center employment will likely be posted to Handshake within the next week, he said.

The remainder of the Student Center’s first floor will include a coffee shop and a food court, featuring a pizzeria, deli and an eatery that will rotate vendors.

The second floor will house a space like The Loft and will also include meeting rooms for student organizations and the Board of Trustees; a new workroom called the “maker space;” a dining lounge and offices for Student Life and the Student Center Director.

Wordlow’s office in Student Employment is housed within the Career Center, so he will also be moving in.

“I’m ready to get into that space,” Wordlow said. “This will be the first time  I am working on a college campus where there is a student center.”

The fourth floor—dubbed the “wellness floor” by Dutil— will feature a 5,000 square-foot fitness center with WiFi-enabled exercise machines and three classrooms for yoga and spin classes, among other fitness classes. Also on the floor is an interfaith room for prayer and meditation, meeting spaces and one of two of the building’s vast murals.

Student input dictated the purpose of many spaces in the building, including the interfaith room, Dutil said.

“Really, nothing was planned until students gave input,” Dutil said.

On the fifth floor, a grand event space is expected to seat about 750 people and fit 1,200 to 1,300 for standing room-only events, as reported Nov. 17, 2018, by the Chronicle. The event space can be divided by a drop down partition wall. The top floor will also feature two terraces and a gallery space, Dutil said.

Seeing that the multi-purpose building is used effectively by students is the only concern Johnson said she has.

“In the beginning, it’s going to be new, so there’s going to be a lot of people there,” Johnson said. “But as the months go on, is it still going to be useful? Are the students going to find it important?”

An initial major construction delay was caused by some underground supports for CTA tracks protruding onto the Student Center’s property, which forced Pepper Construction to redesign the building’s foundation. More recent delays stemmed from the past winter’s extremely cold temperatures, in conjunction with a lapse in receiving the building’s specially-designed glass windows, which caused the structure to remain unsealed to the harsh conditions, making it too cold to work.

Despite the delays, the center’s construction expenses  did not significantly increase from the initial $50 million price tag, and the school has not had to delve into tuition dollars to pay for them, Dutil said, adding that he expects daily operational costs will not exceed the planned budget.

“It’s going to be a real culture shift for students here on campus to have a central hub and have somewhere they’re welcome anytime to come and hang out, and create and collaborate—all those good things we as a school value,” Dutil said.