Stage combat students struggle to do battle from across the internet 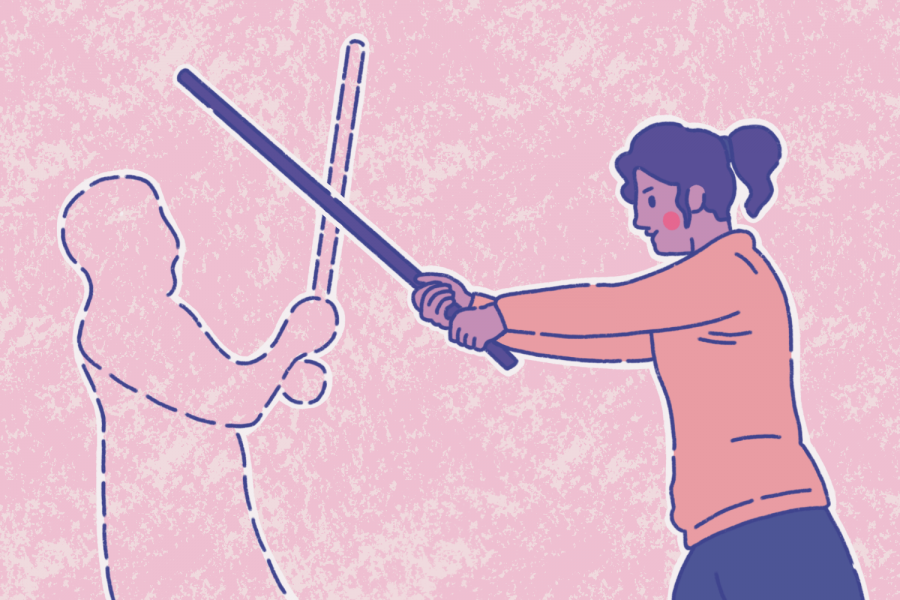 When the pandemic hit in March, the Theatre Department’s stage combat program, which is highly physical and weapon-based, had to think on its feet in order to adapt to learning online, from using spatulas as swords to choking handmade dummies.

“I’m about to start teaching Broadsword from my living room,” said David Woolley, professor of instruction in the Theatre Department. According to Woolley, the department has been pivoting as fast as it can.

Zachery Bernat, a senior stage combat minor, said there are challenges that come with using a rapier and dagger at home.

“I had a low hanging ceiling,” Bernat said. “So, when I would go to block upwards, sometimes I would just hit my ceiling in my basement.”

Jenni Carroll, a senior photography major and teaching assistant, suggested her classes use toy lightsabers as possible weapon substitutes for navigating space and resource barriers in a remote setting.

“It lights up sometimes, randomly,” Carroll said. “It makes the classes interesting.”

Carroll said the department was dedicated to the transition to online learning, working with the resources it had, especially as she does not consider teaching combat over Zoom an easy task. The three professors in the program initially made hundreds of videos to aid their students with the transition.

Woolley, who heads the stage combat program, said there are some positives to working online using Zoom.

“We’re actually able to spend a little more time with the students on some specifics, because we’re really looking closer at them,” Woolley said.

Rather than trying to track 14 students at once as they move around him in a physical space, in a Zoom session he is able to view all of them simultaneously.

However, Woolley also acknowledged the drawbacks of online learning, such as technology issues and slow internet speed.

Bernat has experienced a lag in his internet firsthand. He said last semester when his fighting partner would throw Bernat a slap over Zoom it would take 17 seconds for him to actually receive the slap and therefore be able to react to it.

Julia Gradwohl, a junior stage combat minor and teaching assistant, said she noticed the struggle students had with online classes right away, as everyone had varying internet and spacing issues.

“A bunch of us had to fight with spatulas and wooden spoons when we got to sword work because we didn’t have room to swing 3 feet of something,” Gradwohl said.

Bernat said one advantage of taking classes online is the level of comfort a person feels in their own home rather than being in front of other people.

Carroll is optimistic about what transition back to face-to-face instruction will look like because students are spending this time working hard on their solo skills.

“Once we get back to in-person, we could easily be very connected with our partners, within a couple of rehearsals,” Carroll said.

Woolley said one problem with the department eventually returning to in-person classes is the limited number of staff in place to continually disinfect the 20 weapons that were formally shared among 60 students.

Over Zoom, Woolley said there is a certain amount of artistry involved with enacting violence upon classmates virtually, adding that students can act out the pressure given by one another from what they can see on the screen.

“We’re basically learning how to be good, violent mimes.”