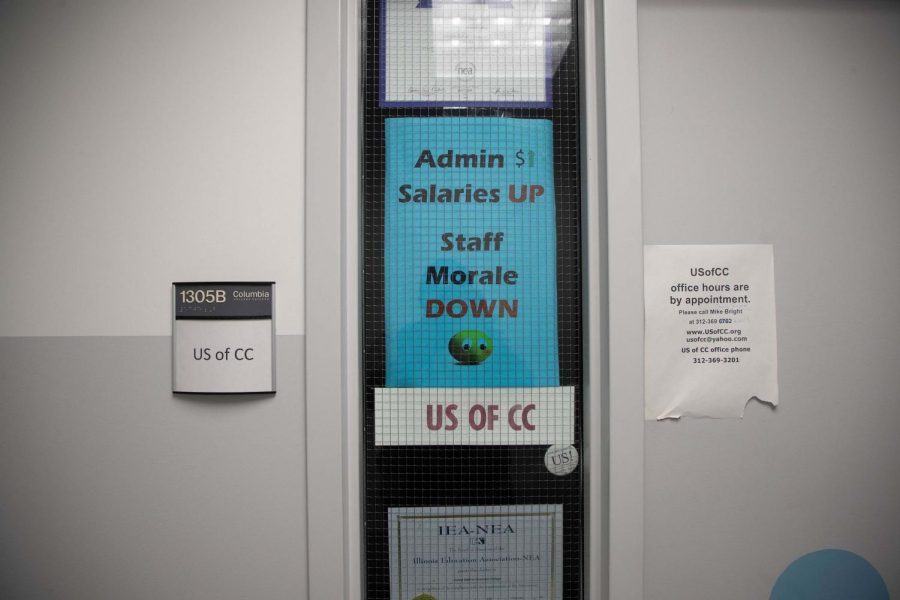 A sign outside the United Staff of Columbia College’s office at 600 S. Michigan Ave. calls for a salary increase for staff members.

The proposal, which was also sent in an email to faculty and staff, would include a total pay raise of 14.5% over six years. Within that number, 10.5% would be retroactive pay to make up for the years the union has gone without a contract. The current contract expired on Aug. 18, 2018.

Sigele, also the academic manager in the Communication Department, said the college’s initial proposal included a signing bonus, but the union’s bargaining team asked them to remove it in favor of including that money into the pay increase.

“We asked them to remove it, because we wanted the money to go into yearly increases that would be cumulative,” Sigele said. “Because the signing bonus is a one–time payment, it doesn’t go into your base pay. So it’s sort of just a way to tempt members into agreeing to a less than perfect option.”

The email from the college’s negotiating team said its offer is “designed to recognize the commitment and contributions of our union colleagues, address the recent rise in inflation, and account for the college’s ongoing financial and enrollment realities.”

The email, which was signed by the college’s six negotiating team members, said the latest offer was informed by “significant financial and enrollment realities.”

While the college initially planned for a deficit of $10 million per year over a span of “several years,” COVID-19 has further increased the deficit, according to the college’s email, which said the school forecasts a deficit of $25 million for the 2022 fiscal year.

“It’s disappointing because we’re below inflation,” Sigele said. “We’re in year four of no raise. And the amount of compensation is not enough. We’re just going to be treading water.”

“The numbers barely cover inflation over the past four years,” Sigele said. “And looking forward to next year, they’re only planning a 2% raise, and we know inflation will be above 4% midway through next year. So it looks like we will continue to be below the consumer price index called the inflation rate.”

The email cited the recent 10% tuition increase, with the college’s negotiating team noting that the administration plans to use the money to “to help the college invest in student services, operations, and personnel (including raises).” But the tuition hike will not completely fix the college’s financial struggles.

Sigele said the union will meet Wednesday to determine whether its membership still agrees with its previous vote to authorize a strike. There are currently no additional meetings scheduled between the union and the college.

In October 94.9% of participating USofCC members voted in favor of authorizing the executive committee to call a strike.

The USofCC sent a notice to the administration and federal authorities ending their agreement under the current expired contract, a move that would allow the union to call a strike as early as Jan. 15.

“Striking is something that we don’t want to do and [is] the last effort, but if we strike it is because the administration is forcing us into having to strike in order to get what we need,” Sigele said.

Sigele said he feels the demands of the union are reasonable, and he is “emboldened” by the support of the faculty and part-time faculty union.

“[Staff members] are energized,” Sigele said. “If we need to strike in order to have our demands met, they’re excited, they’re energized by that.”