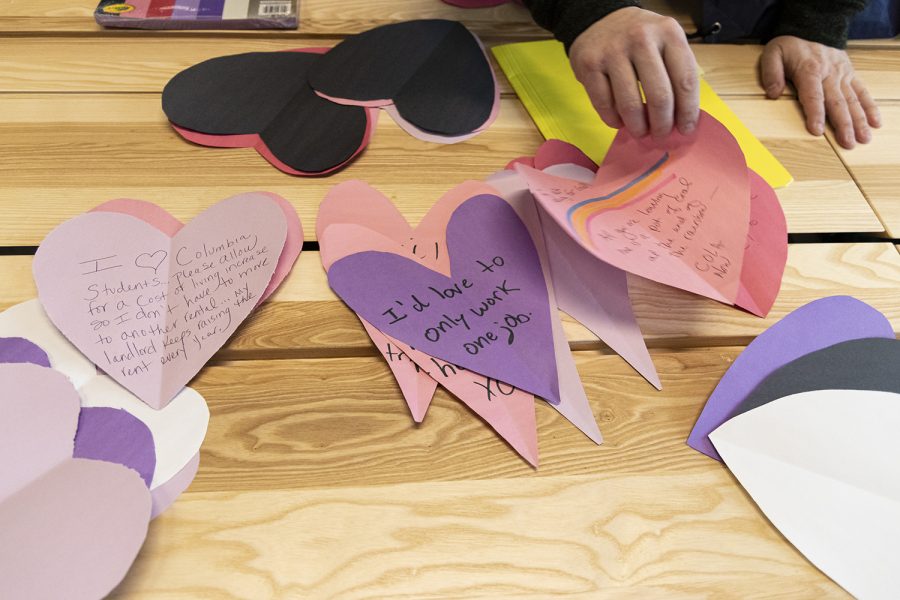 USofCC gives out hand-made valentines with grievances ahead of contract negotiations, Friday Feb. 14.

Surrounded by cut-out paper hearts, an assortment of markers and union paraphernalia, the United Staff of Columbia College celebrated Valentine’s Day with an hour-long rally before sitting down with the college’s administration to continue contract negotiations.

In the lobby of the Student Center, 754 S. Wabash Ave., USofCC discussed health care, benefits and a pay raise—some of the staples of their contract—during the “Love-in.”

“Our numbers have gone down because of layoffs and job eliminations,” said Craig Sigele, USofCC president, part-time faculty member and academic manager in the Communication Department. “But people are still very dedicated to the union because of the benefits.”

Contract negotiations have been underway for more than a year, as reported Wednesday, Jan. 15 by the Chronicle. The union is looking to raise pay for staff to combat the increase in health care costs. Staff salaries are currently 7% below the average cost of living due to accepting lower raises in the past, Sigele said.

“In order to continue with quality health care and affordable rates, it is an understood agreement with administration that we would accept small pay raises in lieu of not having to pay astronomical rates for health care, which most people do,” Sigele said.

On a paper-shaped heart during the “Love-in,” academic adviser Paula Brien wrote: “Raises are due. Good benefits, too. Keep up with inflation, or staff will leave you.” Brien has been part of the union since it formed in 2006.

“One of the things I have seen happen at Columbia is, in the early days if there were a focus group with the staff, you would hear so much love for the entire school from the top layers to the bottom layers,” Brien said. “People came here on a mission, and wanted to be here.”

The Illinois Education Association is the parent union of USofCC and has been helping the staff union with negotiations since they began more than a year ago. With an increase in health care rates, IEA created an information sheet to show USofCC what will happen if their salaries are only raised by 2.25%.

Staff have not had a raise in two years, and it has been more than a year since the last contract ended, Sigele said.

The “Love-in” was not meant to be confrontational, Sigele said. Rather, it was meant as a community bonding moment.

On USofCC’s Instagram, Sigele posted a video encouraging members to come show their support. Once the “Love-in” was wrapped up, USofCC members gave the hearts they made to the negotiation team to pass along to the administration, who they hope will recognize their concerns.

“The staff is appreciated, but we need to be appreciated with compensation,” said Sigele. “We do not live on air.”