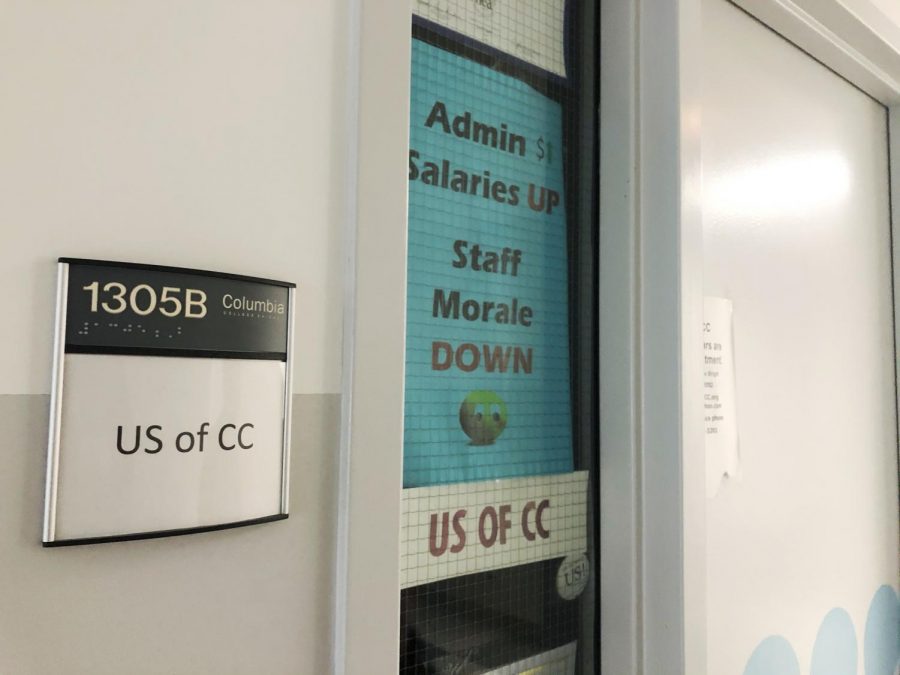 A sign displayed outside the United Staff of Columbia College's office at 600 S. Michigan Ave. calls for a salary increase for staff members.

For the first time since the union’s inception in 2006, the United Staff of Columbia College is tentatively planning to hold a strike vote as the union’s bargaining team reenters negotiations on a new contract.

Still working under the last negotiated agreement for more than three years, the United Staff of Columbia College bargaining team and the college’s representatives met Friday to begin discussions on terms for a new contract. The previous contract expired on Aug. 31, 2018, and the staff has continued to operate under the terms of that contract since.

Matthew Rillie, coordinator of Student Support and Engagement for Student Diversity and Inclusion and membership chair of USofCC, is on the bargaining team. They said given the college’s financial situation due to COVID-19, the staff negotiators temporarily refrained from asking for a salary increase. Now, the team’s focus is back on pay.

“Our staff have not seen any sort of raise in over four years,” Rillie said. “And since that time, especially the past year and a half, [the cost] of living has gone up a lot.”

Staff contracts are negotiated in three year increments. Rillie said the bargaining team is looking to make up for the four years the staff has not seen a raise, plus plan for the next three years. The bargaining team’s initial proposal “considers how far behind [the] cost of living staff at Columbia have become.” The union did not specify the percentage hike they are seeking in wages due to the fluidity of current talks.

Rillie said the pay increase the union is seeking is “to get people to be able to stay here as the world demands more of us.”

“And frankly, the college needs more long-term staff,” Rillie said. “We really worry that if a contract that is not equitable were to be the case, which of course we would not stand for, but then they would see turnover.”

Rillie said if the bargaining team does not see “significant movement” being made toward negotiating a new contract, the team will call for a strike vote. Rillie said this is the first time the staff has expressed intent to call for a strike since the union’s formation.

In an interview with the Chronicle and other members of the administration Sept. 9, President and CEO Kwang-Wu Kim’s Chief of Staff Laurent Pernot said there are many aspects to a contract negotiation, with pay being one of them.

“I think both sides are striving in good faith to move things forward,” Pernot said. “And we hope it is brought to fruition with a contract that helps advance the goals of the college.”

“For many folks here, this is their first unionized job,” Rillie said. “I wish that was not the case; I wish folks had more union jobs. But for a lot of folks who are here, this is their first one. So we have to do a lot of one-on-one talks about ‘What does this mean?’ And, ‘What does our future look like if we do not take stronger, more radical action to demand equity at the college?’”

In an email to the Chronicle following Friday’s meeting, Rillie said the college will present an economic proposal for the union bargaining team to review at the next meeting on Oct. 4. They said they look forward to more “substantial” bargaining sessions.

“Conditions that we work in are conditions that students learn in, and as every staff [member] here says how much they care about the students and the school, staff are starting to really respond in a way that says, ‘I am worth the fight because this college is worth the fight,'” Rillie said.