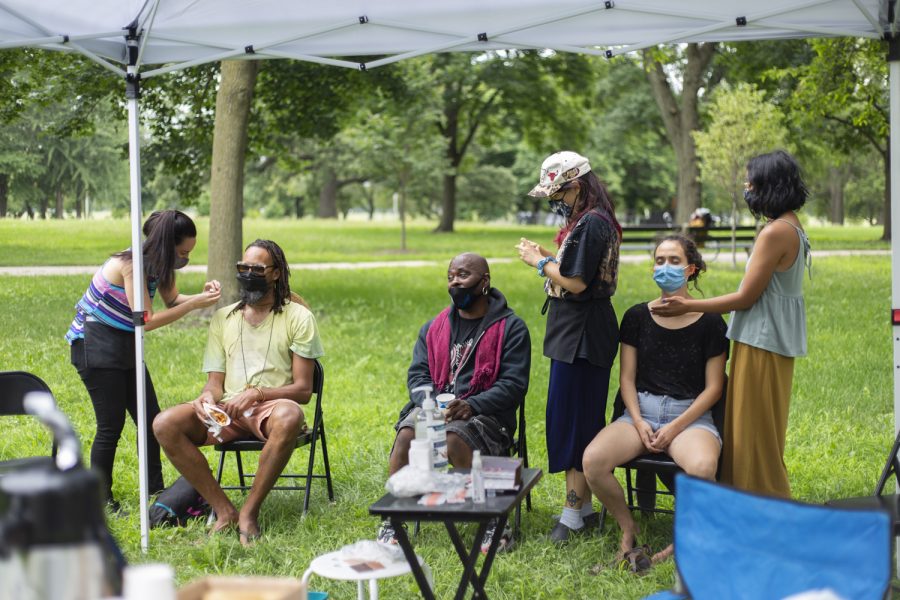 The healing station at "Healing in the Park" offered free reiki, acupuncture and herbs.

Music and a sense of community filled Washington Park last weekend, as community leaders coordinated “Healing in the Park,” an event to provide healing from the trauma inflicted on Chicago’s Black and Brown communities.

Jonathan Williams is an organizer with GKMC, a nonprofit organization based in Englewood advocating for neighborhood resources and an end to violence. Williams said this event was put together because the community needs healing.

Williams said July 17 is the one-year anniversary of Miracle Boyd, an organizer with GKMC, and others being “beaten and brutalized” by the Chicago Police Department at the Christopher Columbus statue in Grant Park.

In a video posted to Twitter, an officer appears to hit Boyd in the face, resulting in several of her front teeth being knocked out. The Civilian Office of Police Accountability investigated the incident, submitting its findings to the superintendent of the Chicago Police Department June 29.

“[The community has] had so much pent-up aggression and there’s just been so much going on in the city, and everybody has been losing people with the pandemic and ongoing gun violence in the city,” Williams said. “So we said we need something for the community by the community so they can heal.”

Isaura Flores is an organizer from Chi Resists, a femme and nonbinary-led organization “dedicated to uplifting the struggles of Black, Brown and Indigenous communities through media, frontline aid and femme-led community organizing,” as stated on their Facebook page.

Flores said this event was also to create more solidarity and community between West Side and South Side Black and Brown neighborhoods.

Flores said they were excited to be in a community event again after not being able to be around people for a long time.

“We wanted to provide resources and food and a safe place to be where people can feel like they can express themselves and find some healing,” Flores said. “We’re all really trying to get the resources into our neighborhoods that we need, and we do that. We keep each other safe and provide for each other … to not depend on the city so much.”

The “Healing in the Park” event provided an art-making station, acupuncture and reiki station, free herbs, an open mic and food such as tamales, chicken and fries as well as vegan-friendly options.

Veronica Rodriguez, a youth organizer with the Brighton Park Neighborhood Council, volunteered with OCAD and helped run the art station at the event.

There were multiple canvases spread around the park with questions and ideas that participants could answer with the paints provided. One of the questions asked to community members was, “What does a safe neighborhood look like?”

Rodriguez said they were trying to encourage folks to create a circle around themselves and have conversations about the questions asked.

Later during the event, a healing circle was created where participants shared their responses to the question asked. Conversations about self-care and safe spaces were discussed.

“Healing in the Park” concluded with an open mic, where participants on stage shared poetry, raps or songs they created.

At the event, Williams said Mayor Lori Lightfoot and the police are doing damage to the community and are not providing solutions to support their citizens.

“That’s why we’ve been advocating for free mental health [resources]. The Black and Brown community is damaged, and we need to heal. There’s layers of generations of trauma that have been built up inside us,” Williams said. “We’ve been trying to do the services ourselves if no one else will.”