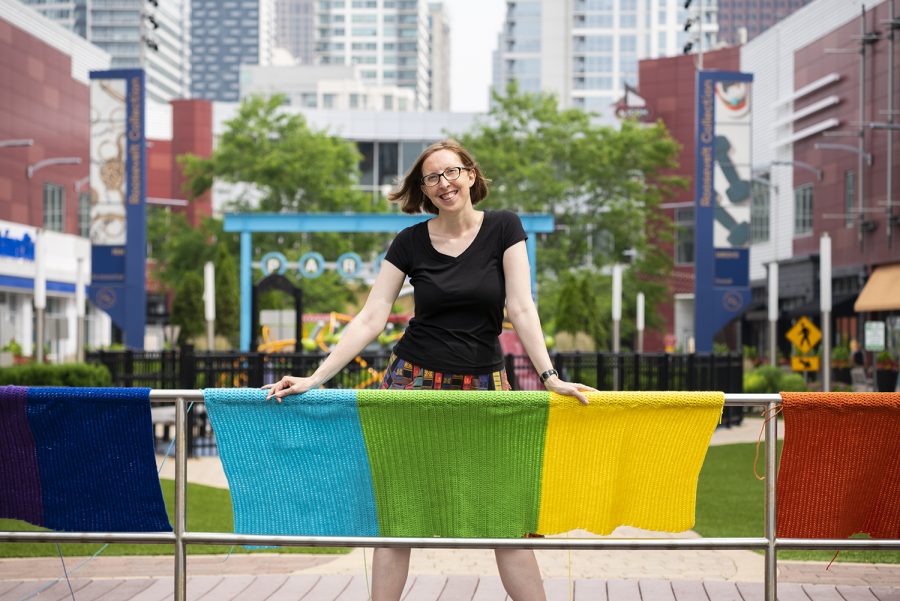 Around the South Loop, crocheted purple pansies grow from a knitted plant bed, while mini cacti rest in the desert and a crocheted snail and gnome sit on a knitted log, waiting to be noticed by passersby.

Valerie Sherman, one of the South Loop’s “yarn bombers,” has brought street art and knitting together by using objects around the neighborhood like barren bicycle racks and dog-waste bag dispensers as her canvas to make the South Loop “cozy and colorful.”

Her latest work is a rainbow-colored, knitted Pride flag nearly the length of a bed scarf at the Roosevelt Collection Shops, 150 W. Roosevelt Road.

Sherman said she was contacted by Shannon Ridgeway, general manager of the Roosevelt Collection Shops, through her Instagram, and was asked to commission a yarn-bombing in celebration of Pride Month.

“Yarn bombing” or “knitfiti” is a type of street art that incorporates knitted or crocheted patterns that are placed onto objects like tree branches, bicycle racks and fences.

“When I first started doing this, I thought I would be fined or arrested, and I would install it early in the morning because I was like, ‘Oh, God,’” she said. “Now, businesses are like, ‘Please, come yarn bomb me.’”

Sherman has been crocheting for nearly 30 years, a skill she developed as a child wanting something to do while watching Saturday morning cartoons. She has been knitting for 15 years after being taught by her husband’s aunt, Sherman said.

Ridgeway and Ashley Paprock, marketing manager for the Roosevelt Collection Shops, said she and Ridgeway wanted the yarn bombing designs to be front and center for the community to see.

“This is a place where [customers] can feel accepted and be themselves,” Paprock said. “It is a shopping center [and] a lifestyle center, but we still want people to know that we do have their backs.”

Sherman said the Pride flag took between 30-40 hours to complete, which she did within a week of being contacted. She begins all projects by measuring the object, knitting and/or crocheting the design and then sewing it on-site, she said.

Typically, a yarn bombing from start to installation takes less than 10 hours, but she said it depends on its size and complexity.

Sherman said some of her first yarn bombings are looking a little “sad” from withstanding the weather, but it is a part of the process to cut down a yarn bombing if it no longer brings joy or beauty to the neighborhood.

As a lifelong Chicago area resident, Sherman moved to the South Loop just 10 months ago, she said, and wanted to start yarn bombing in the suburbs, but was not sure how accepted it would be.

When she moved to the South Loop, she said she felt comfortable doing so there because of the neighborhood’s “funkiness” and its history of yarn-bombed objects, like in 2015 when a knitting team of 35 knitters installed 212 handcrafted, pink bunny slippers on the feet of the Agora statues in Grant Park.

The knitted Pride flag was her first and largest yarn bombing advocating for a community, but on Wednesday, June 24, Sherman installed a sleeve on a bike rail for the Black Lives Matter movement on East 9th Street and South Wabash Avenue.

“Chicago is a really welcoming place, and it’s a really vibrant city—I just hope that everyone feels welcome in the neighborhoods,” Sherman said. “It is time to love everyone.”