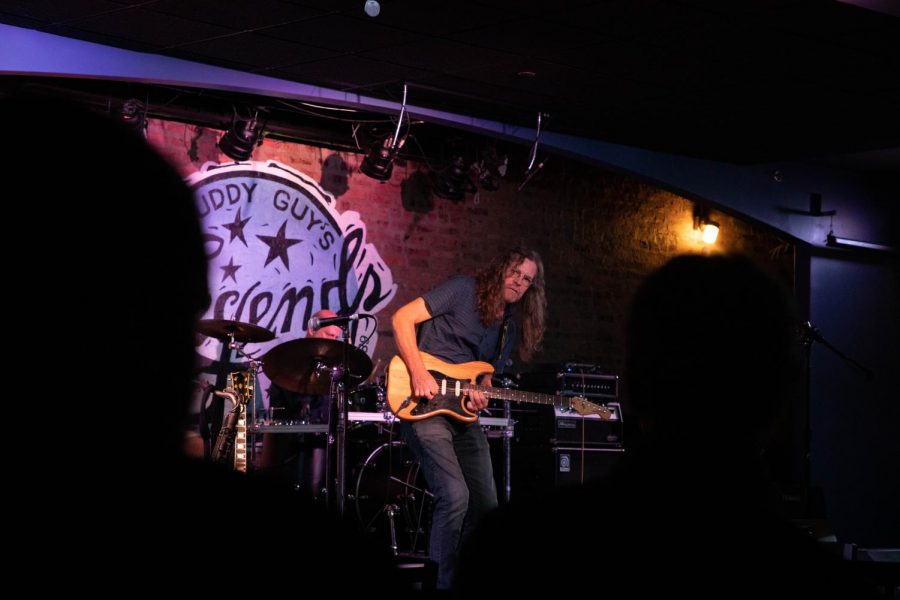 Fans watch as Brother John [Kattke] performs on the stage.

By Valentina Pucarelli and Abra Richardson

Buddy Guy’s Legends feels quieter than usual, but with precautions in place, it’s finally back to having almost daily blues performances and dancing patrons after a year and a half of darkness.

In an interview with the Chronicle Sept. 15, Charlotte Nunn, director of operations at Buddy Guy’s Legends, said COVID-19 restrictions for Chicago bars prohibited them from opening sooner.

Nunn said reopening with 25% capacity would have been a financial disaster for them.

“I have to be able to sustain myself, and that means that I have to have enough customers in here to maintain and [make] payroll with the staff, as well as keep my lights and gas and pay bills,” Nunn said.

Jim DeRogatis, music critic and associate professor of instruction in the English and Creative Writing Department, said many music venues were facing an existential crisis after being closed for a year and a half.

“We’re lucky they survived because Chicago without places like Buddy Guy’s or Metro or Thalia Hall would be a very different and much poorer city in terms of the arts,” DeRogatis said.

Linda Janota, a bartender who has been working at Buddy Guy’s Legends for almost 17 years, said learning the bar was going to close in March 2020 due to COVID-19 felt surreal.

“You never thought you’d come into work one day and they say you have to close because there’s some virus going around, and we don’t know when you can reopen,” Janota said.

Janota said the mask mandate returned the same weekend as their reopening on Aug. 20, so the event wasn’t as big as they would have hoped for.

“The most important thing is we got the doors open; we got people in here; the bar was serving again,” Janota said.

Janota said she noticed people are more cautious, and the bar is quieter now in comparison to before the pandemic.

Brother John Kattke, Marty Binder, Paul Streff and Doug Corcoran have been playing as a group at Buddy Guy’s Legends since its opening in 1989.

Kattke, their lead singer, guitarist and keyboardist, said playing at Buddy Guy’s Legends after 17 months felt unusual, even though they had been playing at outdoor venues since May 2020

Binder, their drummer, said not being able to play at Buddy Guy’s Legends for so long was a big loss, as he used to play there four or five times a month before the pandemic hit.

Brother John is back hosting “Jam Night” every other week on Wednesday evenings.