Some union members feel ‘in the dark,’ others feel administration lacks respect for CFAC 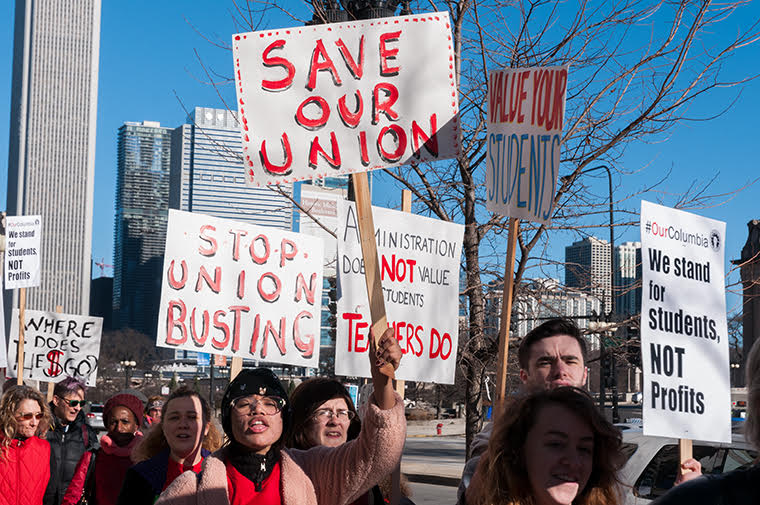 Students and part time faculty protested outside of 600 S. Michigan on day one of a two day strike in December 2017 against the college's decision to raise tuition and unfair contract negotiations.

With the part-time faculty union prepared to strike amid disagreements with college administration over a new labor contract, some students are upset at the possibility of canceled classes, and some union members feel they have been left in the dark.

Meanwhile, some CFAC members say they are not respected by the administration and that their leader has been treated unfairly at meetings and negotiations.

Jim Nagle, an adjunct professor in the English and Creative Writing Department and CFAC member since 2004, said he chose to abstain from last week’s strike authorization vote because he did not have enough information from the union on why a strike was necessary.

Nagle said while more information from negotiations was shared with members in the past, negotiations have become extremely private.

“All the adjuncts that I talked to are very supportive of getting a good, strong, fair contract. In that respect, we support our union,” Nagle said. “We might be a little bit disappointed in the communication between union leadership and the rank and file because many of us feel we’re in the dark.”

In an April 14 CFAC newsletter, the union outlined 20 reasons why it had denied the administration’s most recent contract proposal. Nagle said he wished he had this information prior to the vote to weigh into his decision.

“This weekend we got a couple of emails with some specific information for the first time in months about what is on the table. It was too little too late,” Nagle said. “They don’t say what our proposal is; they don’t give our language, so I still don’t know how far apart we are [in bargaining].”

Former union member Prexy Nesbitt, who left the college after the Fall 2018 semester, said administrators do not value part-time faculty and have berated CFAC President Diana Vallera in meetings with “little jokes, quips and by laughing at things she would say.”

“I don’t think the college has any intent to honorably and seriously deal with the union,” Nesbitt said. “I think its intent is to destroy the union, and I think it has also destroyed the educational environment of Columbia College. I started at Columbia College nearly 30 years ago, and at that point, it was a school that really believed in community and believed in creating a learning environment in which everyone would share and gain from. I left because I found that it had deteriorated to just a corporate atmosphere.”

Nesbitt, who is currently a presidential fellow of peace studies at Chapman University in Orange County, California, said for successful bargaining to take place there needs to be respect between the two parties.

“They don’t respect her. The administration does not show respect to the president, particularly, but generally to the whole bargaining committee unless it’s forced on them by things like a strike,” Nesbitt said.

The Chronicle made multiple calls to Vallera over the past two days which were not returned.

Katrina Kemble, an adjunct professor in the English and Creative Writing Department and union member since 2007, said the 20 reasons provided by CFAC were not compelling enough to warrant a strike. Specifically, Kemble referenced her disagreement with CFAC’s assertion that the exclusion of part-time graduate student instructors from joining the union was a reason to walk out.

Kemble said she voted against the strike authorization because she didn’t know the reasoning behind it.

“Until there’s transparency from union leadership with valid reasons why we would strike, I will not participate,” Kemble said.

Nagle and Kemble said the college had better communication about the negotiations than CFAC did with their own members.

“I was glad to know bargaining was going on because CFAC hasn’t told us that,” Nagle said. “We’re getting information from the wrong side.”

Adjunct Professor in the Business and Entrepreneurship Department and CFAC Steering Committee member Susan Van Veen was one of many union members who voted to authorize the strike.

As reported April 11 by The Chronicle, Van Veen said she voted for the strike authorization because the administration makes decisions that affect part-time faculty without input from CFAC.

“The contract must reflect the quality of education that we’re fighting for, and it needs to reflect the structures necessary to ensure a dignified work environment for our faculty,” Vallera said, as reported by The Chronicle April 11.

According to Vallera,—with 68% of members participating—76% voted to authorize a strike, should an acceptable contract not be reached.

“In a strong show of support for the department reps, the bargaining team and the Steering Committee, you stood together to let the administration know that we are Union Strong and united in our demands for a fair contract,” CFAC said in a Facebook post to members after the vote was taken.

“It is important to stress the union has only threatened a strike; it has not yet called an actual strike to the college’s knowledge,” the email stated. “If the union does opt to go on strike, the college’s commitment is to maintain the academic integrity of the semester and ensure that students receive final grades and credits and, for those about to graduate, degrees.”

Sophomore audio design and production major Dominic Hensel said canceled classes and missing final grades would upset him. Hensel added that when his professors mention the strike in class, they say they do not want to strike because they will not be paid, but feel obligated to participate.

Sophomore photography major Peyton Robinson said negotiating was a better method than striking because it “affects the students who are paying to go here.”

Robinson said she would like more information on the strike, including why some union members support it if negotiations fail.

“The more information the college gives to the students, the better they can understand what’s going on,” Robinson said.

“My commitment is to my students and for my students to have a positive, successful experience at Columbia College,” Kemble said. “That’s why I’m in teaching, and that should be everyone’s first commitment.”

Kemble added that she is looking forward to CFAC elections in the fall because a change of leadership would be good for the union and the college.

Joseph Fedorko, an adjunct professor in the English and Creative Writing Department and union member since 2001, said union members who seek more information have been accused of being anti-union. He voted not to strike because he said there was no clear reason.

Fedorko, who is also the former president of Roosevelt University’s part-time faculty union, added that language from union emails is often negative and alarming, while the college is communicating effectively.

“I put a lot more of the blame on union leadership because they know better,” Fedorko said. “The administration is coming off as being much more level-headed and reasonable than the union. It’s been striking that it’s been the administration that [has] consistently been out in front.”