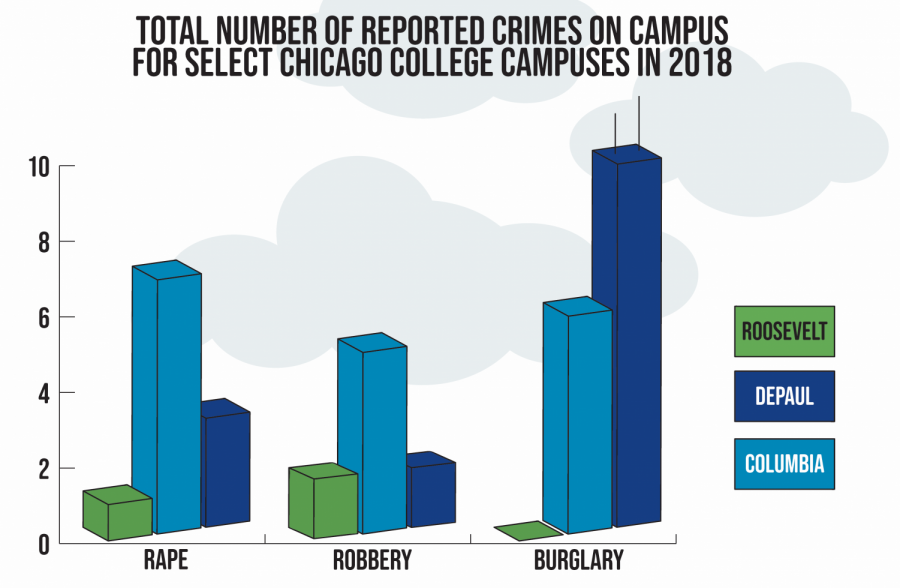 There was a slight increase in reports of rape, robbery, burglary and stalking on campus in 2018 according to the college’s latest Annual Security and Fire Safety Report, though Columbia’s numbers are comparable to other downtown schools. But some experts say underreporting of crimes by students may affect those numbers.

Ronald Sodini, associate vice president of Campus Safety and Security, said the annual report includes a compilation of campus security data as well as Chicago Police Department records breaking down any crimes that happen on campus, on public property adjacent to campus and on non-campus property. Crimes on non-campus property are only counted during times in which school functions are held on-site.

“The objective is to share information about all crime and not limit it to just crime that’s involving a student or an employee,” Sodini said.

In accordance with the 1990 Jeanne Clery Disclosure of Campus Security Policy and Campus Crime Statistics Act, every college participating in federal financial aid programs must “maintain and disclose campus crime statistics” annually to give the public a clear picture of a campus’ criminal conditions.

Overall, Columbia appears to have crime levels that are comparable to Roosevelt University and DePaul University’s Loop campus.

Since 2017, there have been slight increases in rape, robbery, burglary and stalking on-campus at Columbia, according to the 2018 report. The numbers increased from five to seven rapes, two to five robberies, three to six burglaries and one to seven stalking incidents.

Reflecting on this year’s numbers, Sodini said a majority of property crimes can be attributed to unattended items, such as delivery drivers leaving their cars unlocked while delivering food to residence halls.

Violent crimes typically occurred at commercial locations connected to or across from Columbia property. For instance, at the beginning of the semester a robbery took place involving women outside Peet’s Coffee by the Student Center, 754 S. Wabash Ave.

Where burglary is classified as a theft of property, robbery is considered to be a violent crime committed against a person in order to gain their possessions.

“We’re seeing less reports of suspicious activity occurring within our buildings as a consequence of strengthening our control measures at the front doors,” Sodini said.

These statistics, however, cannot necessarily be taken at face value due to a potential lack of reporting from victims, said Megan Alderden, criminology program director at DePaul.

“The reality is, reported crime is not always an accurate indication of [the] kinds of offenses that may have occurred,” Alderden said.

Sophomore photography major Katelynn Rogers was pickpocketed near campus last year and did not report the crime to campus security.

Despite being unsure of how to report crimes through the school, Rogers said she feels mostly secure around school property.

“I, personally, feel safe on campus,” Rogers said. “The crime advisories that are sent out do freak me out a little bit, but I am lucky enough that all my classes are during the daytime.”

On the other hand, Jaye Rodriguez, senior poetry major, said their sense of safety has decreased as the years go on due to the fear of school shootings as well as transgender harassment and exclusion.

They said there is more the college could do to clarify the reporting process.

“Where [can we] report crimes? … Where can I go in-person?” Rodriguez said. “Can I go straight to the Title IX Office? Can I go to a security guard in one of the buildings? Who do I go [to] right after this event happens?”

For most crimes, as is outlined in the Annual Security and Fire Safety report, students can call Campus Safety and Security directly at 312-369-3220, or go to any on-campus security personnel.

To initiate an investigation into sexual misconduct such as assault or harassment, students can either report the incident to a “responsible employee,” which includes most staff members and full- and part-time faculty who are mandatory reporters, or file a grievance with Title IX coordinator Janely Rivera in the Title IX office, 623 S. Wabash Ave.

The college also provides confidential resources and non-professional counselors and advocates, as outlined in the annual report emailed to all students.

Underreporting, which Alderden said could also contribute to the potentially-skewed data set, can occur for multiple reasons.

A 2015 survey by the Bureau of Justice Statistics reported that approximately 53% of violent crimes and 65% of property crimes go unreported in the U.S. In addition, three out of four sexual assaults go unreported, according to the Rape, Abuse and Incest National Network.

Underreporting is common for victims who have experienced negative reactions from those close to them and are not aware they have access to certain resources, Alderden said.

Cameron Okeke, research analyst at the Urban Institute—a Washington D.C.-based nonprofit research organization—said part of this may be due to individuals’ lack of trust in how people in authority will treat them and handle their reports.

Michael Easthope, a junior photography major, said he would rather go straight to the police to report crimes and bypass campus security entirely because he said it seems to be a more convenient and straightforward solution.

“The only reason I would go through the school is if I was next to one of those emergency kiosk things they have, and if that was easier than calling on my cell phone,” Easthope said.

Reporting an emergency or urgent offense directly to law enforcement is something Campus Safety and Security advises, although the hope is that students and faculty also follow up with the college about any crime incidents, Sodini said.

“We certainly want to know about the incident so that we can appropriately respond and assist them in getting help and investigating the incidents as they occur,” Sodini said.

Recently, Columbia has piloted several safety initiatives, such as blue light security phones around campus, as well as stop-and-go access control centers where students scan their cards to gain entrance to all campus buildings in an attempt to prevent crime and ensure students’ safety.

“It’s important that we raise awareness about the potential for someone to be the victim, and we educate our entire community about steps to take to minimize the chance that they can be a victim,” Sodini said.

Students respond to the question, ‘Do you feel safe on campus?’