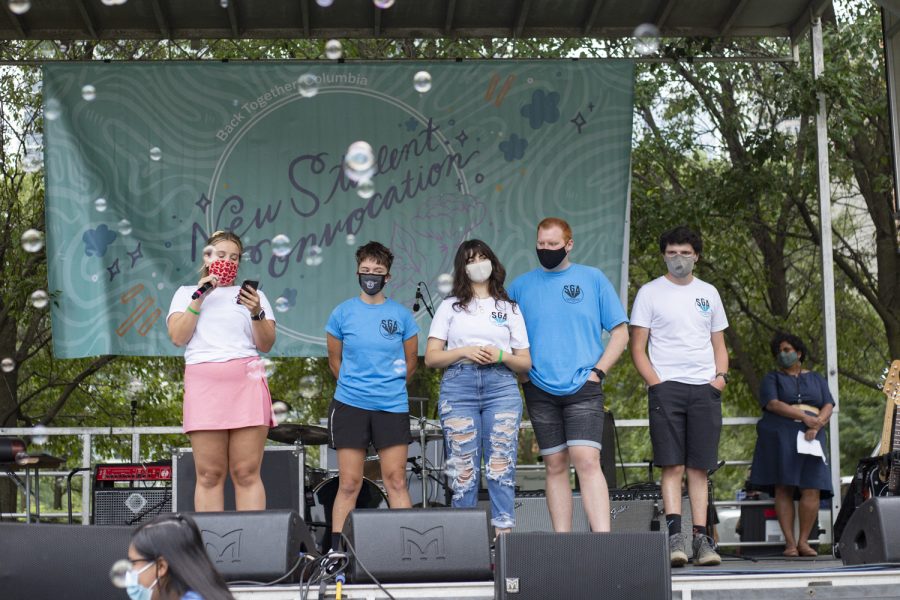 Givens, a junior cinema and television arts major, said Columbia’s new students and some of the school’s returning students have limited familiarity with the campus due to COVID-19. Givens said a smooth transition is part of SGA’s general goals for the year.

“We’re trying to pull the community we’ve worked so hard [to create] online back in person and making sure that everyone feels comfortable,” Givens said. “There’s just so many little things that feel natural to students who have been here for years, but weird to newer students, so anything to make that easier is our number one goal.”

The five student board members also expressed personal goals for their time in SGA.

Executive Vice President Olivia Coelho Porto, a junior acting major, said her goal with SGA is to increase the communication between the school and the students, especially in any decision-making.

Porto said during her time as the international student senator, listening to her friends talk about different issues concerning the school made her want to run for the vice president position.

Executive Vice President of Communications Easton Dippel said his inspiration to run for SGA was noticing confusion among the freshman class regarding transportation to campus during the 2020-2021 academic year and feeling more could be done to help first-year students integrate into Columbia.

Dippel, a sophomore theatre design and technology major, said his biggest goal as the vice president of communications is to educate Columbia students on what the campus has to offer and use social media to show students the different campus buildings and events.

“I think there’s a lot of things this campus has that a lot of people don’t know about,” Dippel said, referring to buildings, resources and activities.

Julianna Lakomski, the executive vice president of finance, said ultimately her goal for her time in the SGA is to be a good role model for students.

Lakomski, a senior English major, first served as the transfer senator for SGA and said she ran for the executive position because of the impact the executive board had on her while she was a senator, and she hopes to make that same impact in her new role.

Ben Jossi, the student representative to the Board of Trustees, said his position is one that always appealed to him because he represents many students. Jossi said the new role feels like a continuation of his previous positions as a first- and second-year student senator.

As for his personal goals, Jossi, a junior music composition and production major, said he wants to represent students’ beliefs when it comes to any decisions made by the Board of Trustees and address the student feedback to the board in a way that is sensible to them.

As the academic year kicks off, the executive board of SGA is looking forward to being on campus again and has noticed the excitement from students.

“There’s a lot of pent-up enthusiasm and people wanting to get involved,” Givens said.

Porto said she missed being in the SGA room because it was easier building relationships with people in person rather than online.

“I wasn’t on campus for a year and a half, and that was really difficult, so I am so happy to be back,” Lakomski said.