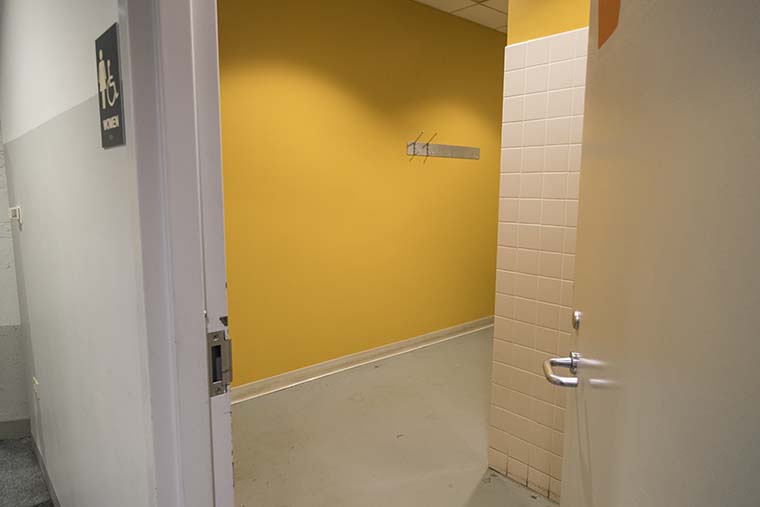 The couch in the second-floor women’s bathroom of the 33 E. Ida B. Wells Drive Building is missing. Yes, it is true: the musty, stained furniture is gone.

But two important questions remain: Where is the couch? Who took it?

Fear not, after receiving some hot tips, The Chronicle has a few theories.

Being president is quite taxing and he may have needed a nap. Maybe he was in the market for a new couch for his office. After giving up on his search to find the greatest couch of all time to spend his generous salary on, Kim might have heard whispers around campus of a couch so perfectly worn-in he just had to have it for himself.

Eye-witness account: “I saw Dr. Kim loitering outside the bathrooms in 33 the other day, which I thought was weird since I’ve never actually seen him on campus,” a junior social media and digital strategy major said. “He stopped me for a moment to ask if the girl’s bathroom couch rumors were really true, to which I answered, ‘Yes.’ After I found out the couch was missing, I knew it had to be him.”

As The Chronicle reported the Student Center has been sold. But rumor has it, before plans to sell were set in motion there may have been a contract in the works to make the bathroom couch the statement furniture piece for the lobby. And obviously, the only couch that would have been worthy of a spot in a brand new, $50 million building was the alarmingly-discolored bathroom couch. But if this theory was true, where is the couch now?

Eye-witness account: “I was walking down Wabash the other day and a truck carrying a dusty purple fabric caught my eye,” a senior advertising major said. “I knew it looked familiar, so I followed the truck until it stopped in front of the new Student Center. When they took it out of the truck and carried it inside, I knew right away it was my beloved bathroom couch. But I guess now that they’re selling the Student Center I’ll never get to sit on it again.”

The Renegades, while lacking funding, must always be on the lookout for great deals on sports equipment. For an E-Sports team, good seating is essential. Couches can be expensive, and with a low budget, a lonely couch in the girl’s bathroom may have seemed like prime real-estate, possibly even good enough to sneak in and swipe for practice seating.

Eye-witness account: “I don’t know what an E-Sports team actually does, but I know I saw some lads in Renegades gear carrying a couch down the stairs in 33,” one freshman illustration major said. “I just assumed it was some kind of low-budget strength training for the quidditch team, but now that the couch is gone, I know I witnessed a crime.”

Well, it’s a possibility, is it not? Maybe we’re just publishing this piece to throw you off our trail. Maybe we’re sitting on it right now as you read this. The beauty of the crime is that you’ll never know.

Eye-witness account: “They’re always so loud in that office, but the other day I heard a serious struggle,” a sophomore fashion studies major said. “At first, I just assumed it was their broken printer, but after a few minutes, I heard a huge crash. I think they were moving furniture.”

In truth, the couch likely just got fed up with Columbia and being sanctioned to live in a bathroom, and walked out. The bathroom couch was there to hold bags and coats alike. It provided a space for students to sit, comfortably have mental breakdowns and for some, even a space to take a nap. One can only imagine what the couch saw during its service to the bathroom, which probably led to its mysterious disappearance.

Eye-witness account: “I may have smoked a little something in Grant Park before heading to class, but I know there is no way I imagined a whole couch walking down the stairs,” a junior cinema art and science major said.

The Chronicle is just as eager as you are to see if the couch will turn up, so be sure to check back for a detailed report if it does. As this is an ongoing investigation, please feel free to send all tips to couch@columbiachronicle.com.