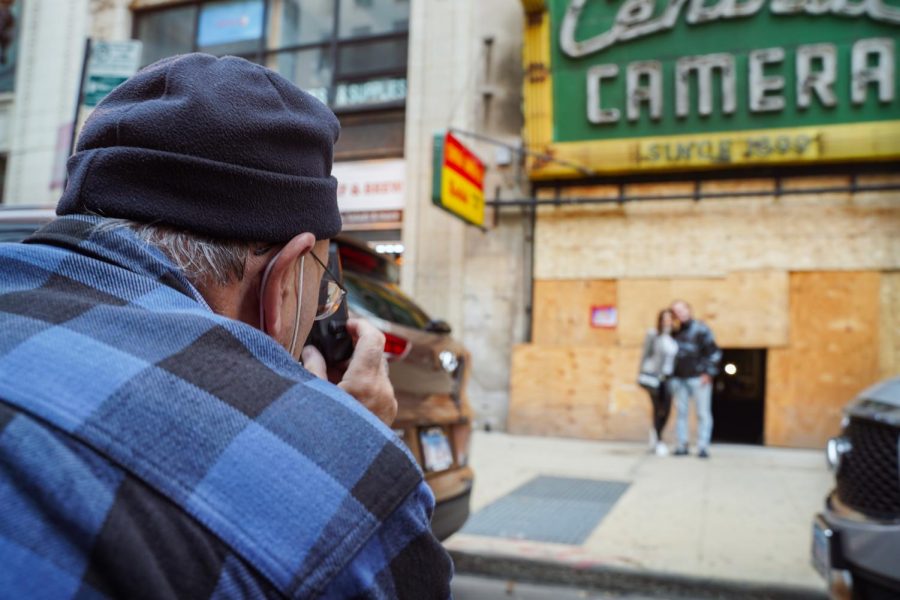 Flesch takes a photo with a disposable camera for his supporters, Armando Orozco (right) and Mariana Castellanos (left) who were visiting Chicago.

When Don Flesch reopens Central Camera in its temporary location later this month, the store’s longtime customers will not be traveling much farther than before. That is because the store will be reopening right next door to its original location.

Flesch, the owner of Central Camera, is planning to open the doors Friday, Oct. 30, exactly five months after the store was destroyed in a fire, as reported by the Chronicle June 12.

The fire occurred as a result of an escalation of violence coming after protests fighting for justice over the death of George Floyd, after video of his killing at the hands of police in Minneapolis was made public. Flesch garnered attention after speaking live on air with CBS Chicago about how upset he was over Floyd’s death, while his store continued to burn down in front of him, holding no anger towards the people involved in the looting and destruction of his store.

Flesch also spoke to this on a GoFundMe page set up to support the rebuilding of the store.

“Although this is a tough time for the store, it doesn’t compare to the loss of George Floyd’s life and the countless other Black lives lost. We stand with the African American community in solidarity,” Flesch said on the page.

The GoFundMe campaign has so far raised more than $220,000—something Flesch said leaves him in disbelief.

Central Camera will occupy 228 S. Wabash Ave. until repairs are completed at 230 S. Wabash Ave. Flesch said he intentionally decided to take up the space, which was previously occupied by Kramer’s Health Foods, to help the landlord, and for the benefit of his business. Kramer’s closed the Wabash location three years ago.

“Once you move, you’re trying to learn the new [location] yourself,” Flesch said, explaining the decision to temporarily move next door. “But how do the people who are dependent on you learn about you [and] where you went?”

Despite his store being destroyed, Flesch said he was always confident he would be able to reopen Central Camera.

“We lost lots of inventory, lots of history, a lot of important things that were special, but you make new ones,” Flesch said. “Otherwise, we’re going to be living in the Stone Age, right?”

Central Camera has been in business since 1899 when it was opened by Flesch’s grandfather, and moved to its current, well-known location at 230 S. Wabash Ave. in 1929.

Flesch said he is working on getting more inventory for the new store including camera accessories, photo paper and film but the focus will remain on what is needed for the original store, which will take more time to replace.

“It’s going be real simple in the temporary store,” Flesch said. “There’s no sense of building out and then having to take it all down and start all over again.”

In the five months since the fire, Flesch has been holding sidewalk sales three days a week—weather permitting—offering a selection of products like film, photo chemical kits and photo folders, as well as photo finishing services.

Jeffrey Spitz, an associate professor in the Cinema and Television Department, has been a regular visitor to the store since he came to Chicago in 1983, despite not being a professional photographer.

“[I would go] to just stand in that camera shop and inhale, look around and appreciate all the history of photography that’s in that one little storefront,” Spitz said.

Spitz said he often wears his black Central Camera T-shirt, donning the logo on the store’s marquee sign, and his students comment on how the shirt is starting to become worn. The store continues to sell merchandise like T-shirts, stickers and tote bags on its website.

“I love wearing my Central Camera T-shirt because I’m happy to have some part of the store with me wherever I go,” Spitz said.

Because he was inspired by Flesch’s resilience after the store was burned down, Spitz decided to create a project for his “Chicago Film History” class where students will film public service announcements in support of Central Camera’s reopening, he said.

“[The students] resonate with Central Camera, and that little storefront on Wabash,” Spitz said. “When they see it, something just touches their heart.”

Luke Davis, a frequent visitor from the west suburbs, supported the store’s sidewalk sale on Friday, Oct. 9 and said he will visit again once the new location is ready.

“This is an excellent institution,” Davis said. “I’m glad that despite burning down, the spirit is still burning strong.”

When he does reopen the doors to the original location, Flesch is not planning any special ceremonies. Instead, he hopes to get back to business as usual and talk to frequent customers, like Spitz and Davis.

“I like talking to people and meeting them every day,” Flesch said. “That’s the best part of life. That’s what life is for, human community sharing. I don’t care about money. I never have been rich, never will be rich and never wanted to be rich, except with people by sharing and having fun.”