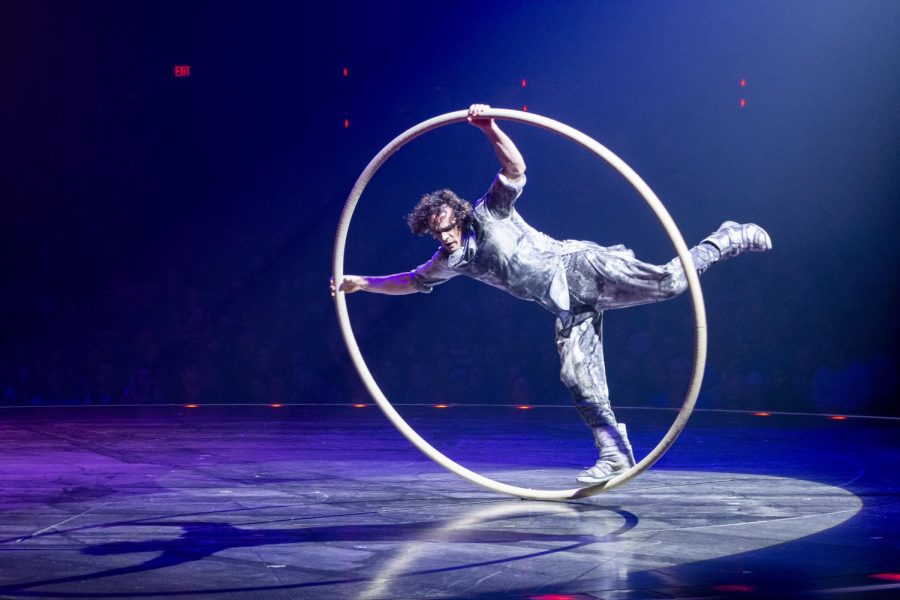 The statuesque Mr. Wow, clad in bright metallic clothes and a golden wig, struts around stage while images of Roman busts flash on the screens behind him. This is “The Mr. Wow Show,” and contestants from all over the world are performing spectacular feats for a chance to win an undetermined prize.

Song—a yo-yoer from China—flips his yo-yo twenty feet in the air and catches it on a string; Bradley from Montreal spins around the stage perfectly tucked into a wheel; and finally Waz from Chicago performs a simple but elegant ballet. He seems to have won, that is until Mr. Wow rips off Waz’s hat to reveal his blue, feathery hair, earning uproarious laughter and mockery from the fellow contestants. Suddenly the crowd has entered the world of “Volta.”

Waz is swarmed by people in gray clothes who are snapping pictures of him with their glowing phones. As he tries to escape them, a woman in bright colors dances onstage, weaving between the crowd and intercepting Waz.

“Volta” is something right out of an episode of Netflix’s “Black Mirror,” playing with the duality of isolation and collaboration. As the gray-clad people march around stage, they are caught up in their phones, not even taking notice of the brightly dressed woman dancing in front of them, waving her arms. Throughout the show, she pulls Waz deeper into a world of colors, laughter and friendship. In this world, performers in equally flamboyant outfits—called the Free Spirits—are riding unicycles, lifting one another into the air and leaping off tall, metal structures to flip onto a trampoline. Everything they do, they do together.

Waz is enchanted—and so is the audience.

At first, “Volta” seems a bit preachy. The idea of people getting sucked into technology and missing the world around them is no new concept. However, as the story unfolds, other themes of nostalgia, individuality and collaboration start to emerge and the message shifts.

By the end of the show, Waz seems to have learned the lesson “Volta” is trying to teach everyone: You cannot let go of who you are, but you can embrace it.

At one point, when the gray people try to snap pictures of Waz and his hair, he starts to shy away from them again, but his new friend encourages him to pose with her, even going so far as to pluck a feather from his head and slip it proudly into her own hat.

Waz’s newfound friend is not annoyed with those looking at her from behind a phone camera, she is only encouraging them to do it for the right reasons. In this way, “Volta” does not seem to look down on people for being lost in their phones. It simply displays all the beauty and connection they might miss if they don’t take a moment to look up and appreciate it.

When it comes to Cirque du Soleil, that beauty includes death-defying stunts, including one jaw-dropping, hand-over-your-mouth number where a woman is suspended by only her hair, twirling and twisting high above the crowd while everyone is left wondering how strong her neck muscles are.

Perhaps the most stunning part of “Volta” is every single person onstage brings a unique talent and a vibrant presence to the stage. The ensemble consists of people who are able to tumble through double-dutch ropes one moment, and perform BMX-style bike tricks the next—all the while grinning at the awed audience members in front of them. Their eyes all hold a playful twinkle, even when performing the more emotional moments of the show. They draw the crowd in, gain their trust and admiration and then rocket into the air, making stomachs drop and faces light up all around the room.

“Volta” is performed in the south parking lot behind Soldier Field, 461 E. 18th Drive, through July 6.