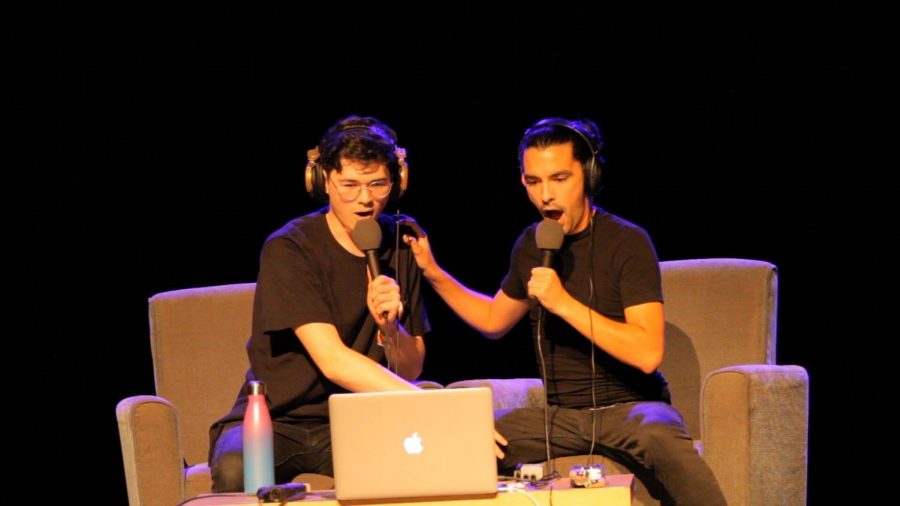 YouTube comedy duo "Pretty Much It" brought their "13 Cities Why," tour to The Chicago High School for the Arts ChiArts Auditorium, 2714 W. Augusta Blvd., Sept. 20.

The auditorium was filled with sounds of excitement from fans as the lights dimmed, and they knew they soon would be seeing a glimpse of who killed Bryce Walker in season three of “13 Reasons Why.”

YouTube comedy duo “Pretty Much It” brought their “13 Cities Why,” tour to The Chicago High School for the Arts ChiArts Auditorium, 2714 W. Augusta Blvd., Sept. 20. The tour was a concept created by the comedic pair as a way to watch each episode of the popular Netflix show “13 Reasons Why” live with their fans.

Comprised of Eric Striffler and Jacob Shao, “Pretty Much It” is a YouTube channel and series that provides comedic commentary on films or TV shows. Since their start in 2017, the channel has garnered more than 600,000 subscribers and 51 million views.

It is not everyday that people make a name for themselves by making jokes over film and television show tracks. “Pretty Much It” is a channel that is able to set themselves apart from other commentary channels on YouTube because they add to the dialogue of the show they’re watching.

The tour ran from Aug. 31 to Sept. 21, with its first stop in Philadelphia and its finale in New York City. During each show, they would watch the next episode of the series and create a live recording, later posting it online for fans who were not present.

“About a year ago, … we decided we wanted to do a tour because we can’t watch ’13 Reasons Why’ season three anyway else,” Shao said. “Step one, we’ll wait for the release date of the show to come out. Step two, we’ll plan everything else.”

Miles Bonsignore, a fellow YouTuber known for his work with the “Try Guys,” served as the opening act for “Pretty Much It” for the first half of the tourdates. Bonsignore’s set included him rapping a comedic summary of everything that happened in the first season of “13 Reasons Why.”

“She left these tapes, which is kind of mean because nobody has a walkman in 2019,” Bonsignore rapped in reference to “13 Reasons Why” antagonist Hannah Baker. “The tapes blew up like super freaking fast, so it was actually a smart way for her to start a podcast.”

Bonsignore’s set added another layer to the show. By satirizing the series, he kept his audience captivated. His already recorded set worked for the simple fact that laughter is infectious and Bonsignore was able to make something as serious as self-care funny.

Although season one and two of “13 Reasons Why” tackled mental health, sexual assault and bullying, season three follows a whodunit storyline. With this change, a new character takes over the role of narrator for Hannah Baker.

“In the last episode, we first heard the voice finally … of someone talking to her on the other side,” Striffler said in a scene about where the new narrator is being interrogated. “Because up until now, I’ve been assuming that’s the year 2045 and she is an undercover cop recounting it to a true-crime blogger or something.”

Striffler and Shao’s quips and subtle comments added to “13 Reasons Why” without it reading like they wanted to interject just to hear themselves speak. By taking pauses to listen to what was happening in the show, they did not have to force any of their humor.

Although they had not seen all of the episodes, Shao and Striffler made sure to give fans a trigger warning before the show, making sure to tell everyone that they would not be heckled if they got up.

Throughout the penultimate, 59-minute episode, “Pretty Much It” shouted “Go Tigers” and questioned if high school-aged teens would actually write such mature speeches for a school assembly. At one point, Shao and Striffler were joking about a scene and completely missed a key plot point on who claimed to kill the show’s main villain, Bryce Walker. Going so far to note that if they had not done this live they would not have known what happened.

The live commentary show gave off more of an environment of friends watching a film in someone’s house than a YouTube event put together for the sake of the entertainers making a profit.

“Guys you were here for the best episode,” Striffler said. “Thank you all so much for coming out, and, that’s pretty much it!”