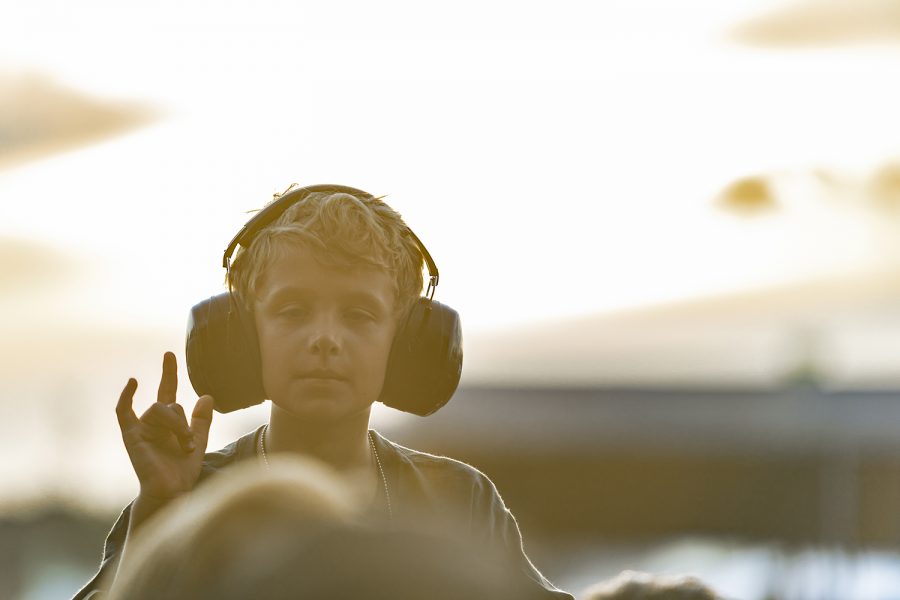 Moshing, and a bit of claustrophobia: It is no surprise Blink-182 brought in one of the largest, and most eager, crowds for the Riot Fest weekend. After last year’s cancellation due to health reasons and the 20th anniversary of its“Enema of the State” album, they were bound for redemption—and they got it.

The crowd was hyped-up and ready to jump along to the band’s 1999 hits. One slight glimpse of bassist and co-lead vocalist Mark Hoppus’ signature pointed hair sent the entire crowd stampede forward, making it nearly impossible to breathe—although the “crappy punk rock” brought air to the moment.

Midday acoustics: Mat Kerekes, better known for his role in the hardcore rock collective Citizen, slowed things down for fans during an afternoon show on the Rebel Stage. Although Kerekes has been producing solo projects before forming Citizen in 2009, Kerekes’ first studio EP came out in 2014. After not releasing a new solo for three years, Kerekes came out with his latest album “Ruby” April 19, which he told The Chronicle was not planned.

This year’s Riot Fest was Kerekes first time performing his solo work. He said, aside from playing past years with Citizen, he used to attend the festival as an audience member.

With a new album released, keep an eye out for Kerekes’ next solo show appearance. And be sure to keep an eye on his arms, as he might just add to his canvas of tattoos with David Bowie’s face or Chris Fehn’s long-nose mask from Slipknot.
Saturday, Sept. 14

A riot of a wedding ceremony: Love was surely in the air during day two of the festival. While taking photos for a marriage proposal, The Chronicle was asked to capture an actual wedding ceremony later that day. And yes, the clergy person was ordained, making it official.

Riot Fest was the first festival Dane and Danielle Duhoffmann attended together as a couple.

“I wasn’t into punk-rock music at all,” Danielle said. “He introduced me to this whole culture. This has become our Mecca every single year.”

Originally from Maryland, she said they had plans to get married this year, but the wedding planning stress ended up being too much for them, so they decided to hold it at a place they already loved.

The crowd gets moving: The radiance of English rock band The Struts spread among the crowd, which stretched over a hill and past the pit’s limits. With a red satin shirt flowing to each movement made by frontman Luke Spiller, the audience could not help but join in on the dancing.

Although the band formed in 2012, their distinct rock sound could date them back to the days The Rolling Stones were in their prime.

Before concluding their set, Spiller welcomed everyone who was seeing them for the first time to the Struts family.

Spiller then encouraged the audience to kneel down on the ground and jump up when he gave the cue, creating the illusion of the band’s own human fireworks.
Sunday, Sept. 15

After graduating from the School of the Art Institute Chicago in 2014 with a degree in interior architecture, Garofalo felt the urge to venture out creatively, and went on to start a band. Garofalo said music was always on the back-burner for her, and she never knew she would end up pursuing a career in it.

Named after a rare dissociative disorder after stumbling upon it on a site similar to Reddit, Garofalo said Ganser focuses on exploring the inner world of mental wellbeing, anxiety, communication and what it means to get lost in translation.

As a poet, Garofalo said she enjoys making a list of terms and phrases and creating her music out of poetry.

Women can rock, too: Although it is overly outdated to be shocked by an all-girl alternative-rock band, it is hard not to point out The Beaches, originally from Toronto, as festivals such as Riot Fest are usually filled with male groups.

The Beaches’ midday set on the Riot Stage started out with a fairly small crowd—until they began to rock their first song.

An intense combination of guitar and bass riffs, lead vocalist Jordan Miller’s exquisite voice and a fast-speed drum beat drew in people from across the lawn. The four demonstrated a powerful moment for female artists with in-sync movements and endless energy, causing fans to make a large group by locking arms and swinging in a circle, not minding the puddles of mud below them.