The Columbia Chronicle • May 19, 2020 • https://columbiachronicle.com/review-purposefully-kept-truths-about-the-asylum-process-revealed-in-between-everything-and-nothing

Review: ‘Purposefully kept’ truths about the asylum process revealed in ‘Between Everything and Nothing’ 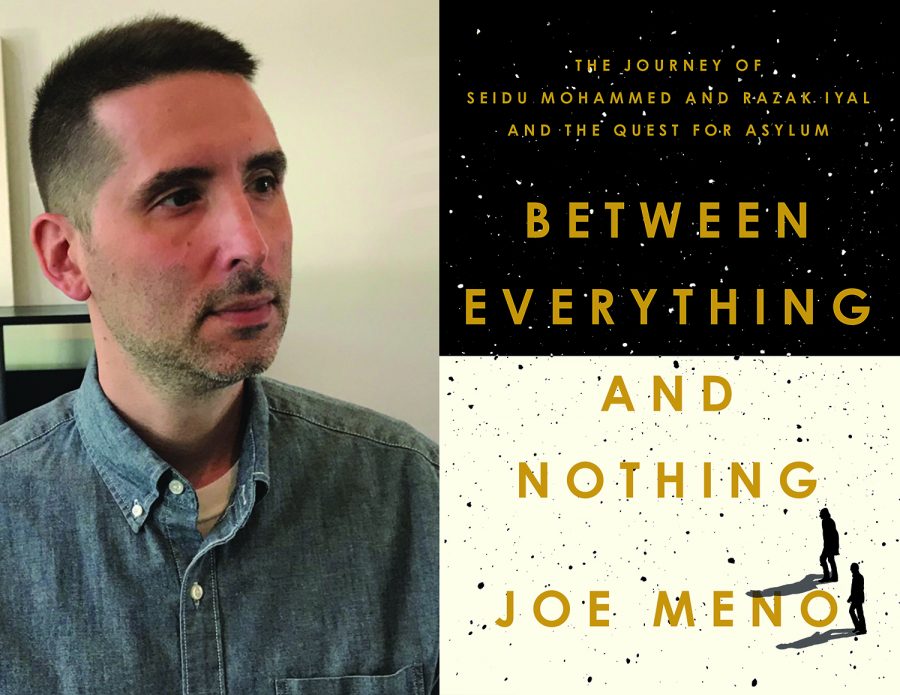 What began as a friend’s simple suggestion for an essay became a two-and-a-half-year project. The result? A 336-page retelling of the trials and tribulations of two Ghanaian asylum seekers, Seidu Mohammed and Razak Iyal.

Joe Meno, a professor in Columbia’s English and Creative Writing Department and author of “Between Everything and Nothing: The Journey of Seidu Mohammed and Razak Iyal and the Quest for Asylum,” sat down with Mohammed and Iyal multiple times over the course of those two and a half years to fully understand the life-altering, respective journeys the men took from their homes in Ghana to their ultimate destination, Canada.

“It was easily one on the most remarkable, humbling experiences of my life,” Meno said in an interview with the Chronicle. “The way they told their stories was incredibly eloquent and heart-wrenching.”

Upon first meeting, they “spoke for the next five hours without taking a break, and at that point, I realized this was much bigger than an essay or article,” Meno said.

The book differs from similar stories on the subject because most other material focuses on the refugee program, not the asylum process—refugee is a title given to a person before entering the U.S., while an asylum seeker is already in the U.S. and wants to obtain protection from persecution in their home country. As for Mohammed and Iyal, they sought asylum after the former was outed for being bisexual and the latter was involved in a murderous altercation, forcing them both to flee Ghana.

This true story is in no way similar to the kind of historical recount one might find in a textbook. While it does reflect on Ghana’s sociopolitical background and offers specific examples of the lives of refugees alongside abundant research on the United States’ asylum process, the book also provides humanizing narratives of brave refugees who are often demonized by the public and politicians.

Moreover, the nuanced narrative created on the page is not without the assistance of the various literary devices at play—elements that could only be incorporated by an author well-versed in both fiction and nonfiction.

One of these devices is descriptive imagery, which grounds the reader in the story’s setting, allowing the reader to share the reality of the space with Mohammed and Iyal as the story progresses.

One such instance follows Iyal as he passes through the jungle in Costa Rica, as Meno writes: “Howler monkeys, sloths, and venomous snakes all made their way in the dense trees above. From the back of the motorbike, Razak could see the forest around him was alive, constantly moving, a vital, breathing creature unto itself. Raindrops on leaves. Animal tracks in the mud.”

Despite the story being told in third-person, this book continuously puts Mohammed and Iyal first by refusing to generalize their experience, reliving their past on the page and authentically using their native tongue throughout, both in dialogue and in direct thought.

“The interplay of language has so much to do with identity [and] their connection to home, even though they are far removed from it,” Meno said. “Both grew up learning English in school … but the joy both of them described being able to communicate in this language that shares a kind of intimacy and also a sense of home [is evident].”

In a political era where these stories are purposefully shuttered from the public’s eyes and ears, pulling the curtain back on the devastating reality and intricacies of the asylum process is necessary.

Though the stories of Mohammed and Iyal are isolated examples, they are universal truths of the atrocities that happen to many refugees as they attempt to seek asylum for themselves and their families.

“I felt so humbled and privileged to be able to just listen to these two men speak,” Meno said. “First and foremost, this book is about their experience. … It’s not a political manifesto, it’s really about these two men and their stories.”

“Between Everything and Nothing” will be published June 2, 2020.