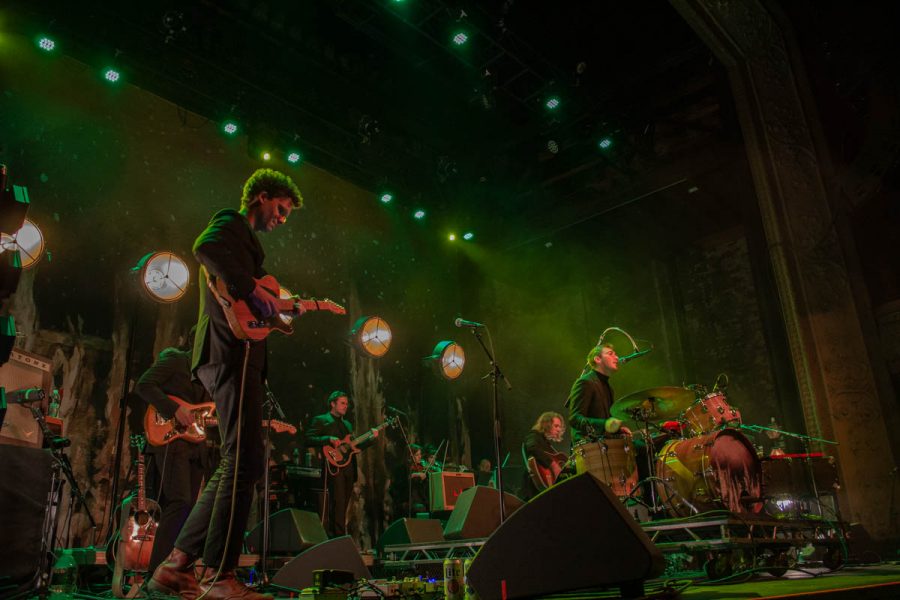 Chicago’s indie music scene is nearly impossible to reference without the power duo Whitney coming to mind. Since 2015, Julien Ehrlich, drums and vocals, and Max Kakacek, guitar, have designed smooth, blissful soundtracks to cater to each wave of seasons, creating a deep appreciation for indie-folk and soul in Chicago.

After releasing their sophomore LP, “Forever Turned Around,” Aug. 30, Mayor Lori Lightfoot declared the day of the release “Whitney Day,” proving the band’s impact and place in the city––Lightfoot honored the band for its devoted contributions to the Chicago music scene. The day was celebrated with various events across the city, including an acoustic live album release. Since the event, the band has been touring internationally to showcase its most developed culmination of indie tunes to date.

The band brought the album back to Chicago Wednesday, Dec. 4 through Sunday, Dec. 8 with completely sold-out shows at Thalia Hall, 1807 S. Allport St. On their second night, Thursday Dec. 5, the band gave a performance every Chicagoan in attendance will never forget.

While Whitney is most known as a duo, Ehrlich and Kakacek brought out a full band for their live shows, including piano, violins, a cello, trumpets, an acoustic guitar and bass––bringing an upbeat yet subtle folk sound to life. The mini-orchestra onstage gave a depth to the band that is not portrayed by simply listening to them through headphones. No one truly knows Whitney until they are able to see Whitney.

While the music is the main part of the show, it is hard to deny the humor and laughter onstage from Ehrlich. Through his commentary and brief jokes, the distance from the band and audience immediately withers away. Prior to their string of shows in their hometown, Ehrlich lost his voice and was seen downing cup after cup of hot tea and taking spoonful shots of honey. Being sick did not interfere with the soothing melody of Ehrlich’s voice, though. In fact, despite the being ill, he sounded even better than before he was sick and gave everything he had to the crowd.

The band performed a mixture of new and old songs as well as covers, with one of the best being a powerful rendition of American rock band NRBQ’s 1972 song “Magnet.” From Ehrlich’s ability to hit the highest vocal pitch to an insane piano solo that captivated the crowd, to Kakacek’s attention-stealing guitar riffs to the smooth sounds of trumpets rolling in––this cover will be engraved in the minds of everyone who heard it.

The show’s setlist was one for the books, and it was hard to look around and not see someone singing along or swaying to the tunes. To get the crowd even more hyped, the band brought out a dear friend of theirs, Aaron Scott, who brought the vocals to the next level, while heavily sprinkling in touches of soul.

Aside from the music, the show’s aesthetic kept people engaged until the last note of the final song. With five large spotlights at the back of the stage, the warm, yellow lights bounced around the room, creating a comfortable and intimate environment. All members of the band wore black suits—aside from a women on the strings—dressing the part for the most successful album they have. And while professional, a shoeless Ehrlich still rocked the kick drum.

As if the show couldn’t get any better, before as four-song encore, the band brought out a local friend who proposed on stage to his now-fiancée, and closed out the show with its fresh and serene lulls of “Valleys (My Love).”

Good thing the band had a lineup of shows back-to-back, because one performance of the beloved Chicago-based indie dream is never enough.