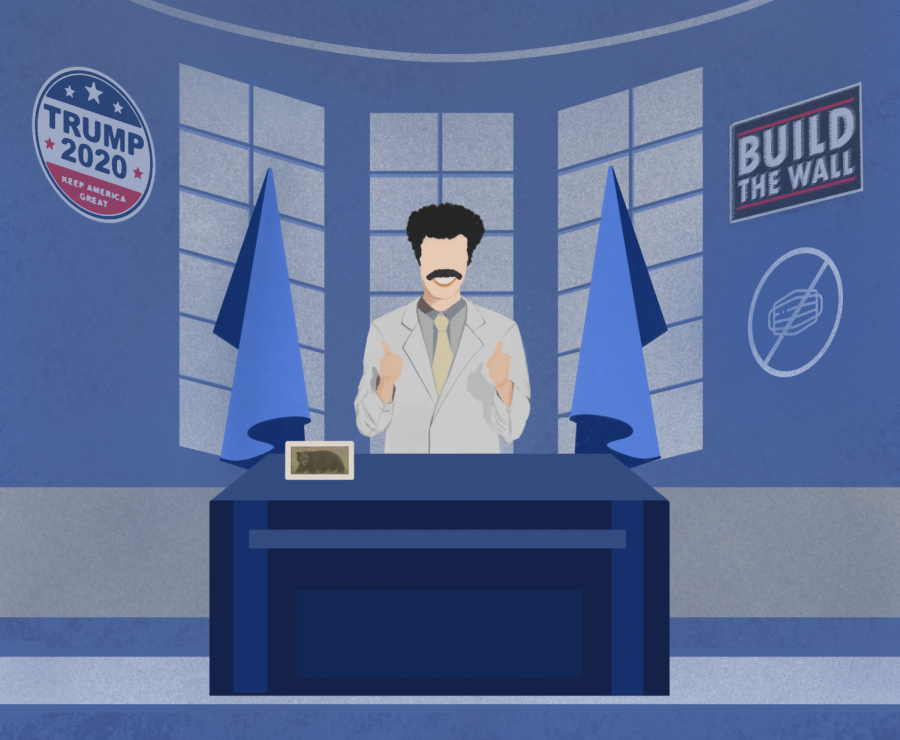 Movie sequels made more than a decade after their predecessor often lack justification for existing. But the aptly titled film, “Borat: Subsequent Moviefilm,” created by actor Sacha Baron Cohen, manages to maintain relevance.

In his first film, Borat, played by Cohen, travels across the U.S. to get advice on how to run his homeland as a fictional journalist of Kazakhstan.

The film is meta in how it blurs the line between filmed and real-life events. Due to the box-office success of his first film, which made $26.1 million in its opening weekend in 2006, Cohen has to wear multiple outlandish disguises so he and his character are not recognized as he travels across “Yankeeland.”

Like a driver rubbernecking at a car crash on the highway, Borat’s comedy is hard to look away from, no matter how cringe-inducing his antics are. At one point in the film, Borat walks into the Conservative Political Action Conference disguised as a Klu Klux Klan member to go “unnoticed.”

The fourteen years between the two movies provide ample material for the consecutive punchlines and dark humor. Borat encounters non-suspecting citizens, anti-maskers during the COVID-19 lockdown and QAnon theorists.

The charm of both Borat films is not just in the character’s stunts, but how the people he interacts with react and play further into the chaotic comedy.

Borat starts out as the butt of the joke until his shenanigans turn into a mirror he holds up to the people he meets, forcing them to confront their own racism and sexism.

The story of the subsequent film is surprisingly more compelling than the first—it is about family. Borat is joined by his daughter, Tutar, played by Maria Bakalova.

Between cringey plot points, the movie leaves time for quiet moments where the father and daughter’s relationship develops in a surprisingly effective way.

Borat starts off by treating Tutar less like a human being and more like a dog or horse. As absurd as the movie is, it does a good job in showing their relationship develop.

Early press reviews of the new film touched on a situation between former New York Mayor Rudy Giuliani and Tutar, which raised some eyebrows. Following an undercover interview with Giuliani for the film, he is seen tucking in his shirt after removing a microphone while in a hotel bedroom with Bakalova, whose character is 15 years old. The scene was controversial due to pictures that were circulated online of Guiliani laying down on a hotel bed with his hand near his crotch next to Bakalova.

Although the scene is exaggerated to a degree in the movie, Giuliani’s behavior would be enough to warrant an interruption from NBC host Chris Hansen. Fortunately, the scene does turn into an episode of the former television series “To Catch a Predator” because Borat barges in before anything bad can happen to Tutar.

Giuliani posted a tweet during the week of the movie’s release saying he did nothing “inappropriate” and “If Sacha Baron Cohen implies otherwise, he is a stone-cold liar.”

Considering the tragically ironic events that have happened in 2020 that move beyond parody, the satirical nature of the film somehow still works.

Borat blurs the lines between a comedy and a meta-commentary on the mindset of Americans.

The first “Borat” film’s conclusion understates the audiences representation and instead focuses on the spectacle that is Borat. “Borat: Subsequent Moviefilm” will leave the audience saying, “Wawaweewa!” at how Borat is less ridiculous than most Americans in 2020.