The Columbia Chronicle • May 18, 2020 • https://columbiachronicle.com/review-american-gun-a-poem-by-100-chicagoans-locks-change-in-the-revolver

Review: ‘American Gun: A Poem by 100 Chicagoans’ locks change in the revolver 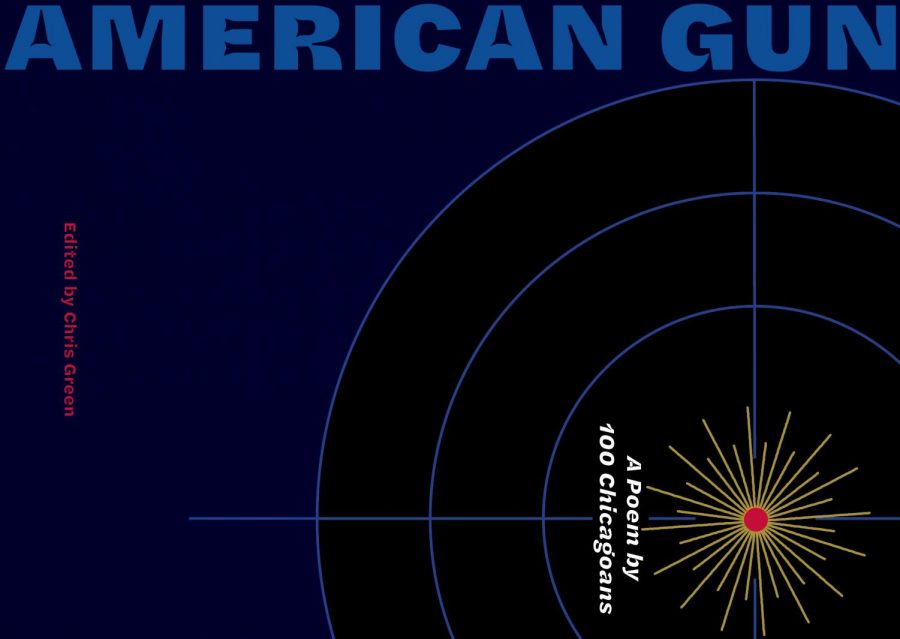 “There are guns in the streets, there will never be peace,” wrote 17-year-old James Lofton in the last line of “American Gun: A Poem by 100 Chicagoans.”

This line ricochets in the brain like the sound of a gunshot bouncing off Chicago’s thick, concrete walls and streets.

The collective of artists in “American Gun” does its job and does it well, informing the reader about gun violence while tugging at their heartstrings and tearing through memories.

“American Gun” is a poem, just shy of 50 pages, written by 100 poets from across Chicago. Its editor, Chris Green—a professor in the English Department at DePaul University and a founding editor of the collection’s publisher, DePaul’s Big Shoulders Books—gave each poet simple instructions: Take this four-line stanza from the previous poet and use its lines two and four as your lines one and three.

Through this process came the cries of the grieving. The book is structured as a pantoum poem—with lines repeating every stanza—which gives each section a different sense of urgency and a different emphasis placed on the issue of gun violence. At times, it reads like each poet is screaming the lines to the reader; at others, it reads like a monologue from a Shakespearean tragedy or a rap from a grief-stricken artist.

“The poem travels from more experienced poets to younger poets,” Green said. “The very last movement in the poem [is]10 teen poets from two alternative high schools in Chicago, which, statistically, those schools are the ones that experience the most gun violence by far.”

But the poem also features a number of Columbia authors, including students, teachers and alumni.

Tony Trigilio, a professor in the English and Creative Writing Department who wrote a stanza in the poem, said he was drawn to its repetitive nature.

His stanza, which is heavy in nature imagery—”automatic rounds bloom red”—was inspired by the blooming life of spring outside his window in contrast to the constant death in his city.

“It’s recycling the imagery from the stanza before mine, which … focuses on these hands pointing heavenward. It’s a call to enact metaphor,” he said. “Let us pretend the enjoyment of the season is all we need to be safe.”

Though the pandemic has delayed the release of the print version, Green said he still hopes people will read the book online and come up with their own literary service projects to make a difference.

“Maybe poetry can’t solve all our problems,” Weir said. “But it can bring us together. And certainly, no social change happens without people organizing, right? Without people coming together.”

“American Gun” is available on Big Shoulders Books’ website for preorder and download for free. Coming soon, there will also be an option to add to the pantoum online.